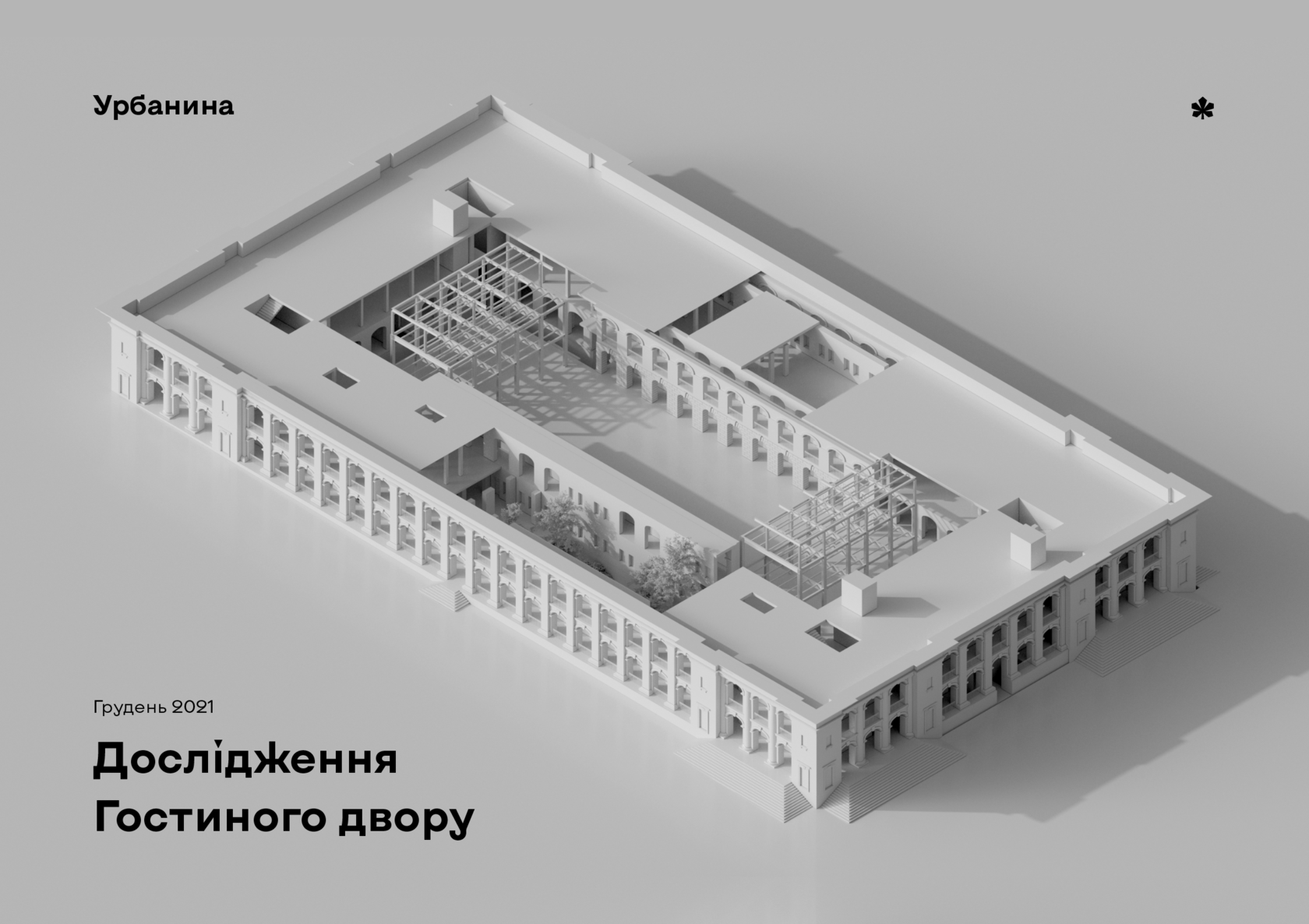 We conducted research of Kontraktova Square and the Hostynyi Dvir to describe the area around the building, analyze its condition, and understand stakeholders' expectations about the future of the Hostynyi Dvir.

We researched the history of the building, analyzed it to understand what changes have taken place in the building and its current condition, counted pedestrians, and collected various activities in the square. We also talked to Kyiv residents about the state of Kontraktova Square and recorded their ideas of what could be in the Hostynyi Dvir and what could not be there.

In 1798, Contract Fairs began to be held on the square. Simultaneously with their development, there was a need to build a larger, two-story Hostynyi Dvir on the square. In 1806 the architect Luigi Rusca was commissioned to design the building. Luigi Ruska's project was created in the style of classicism. It should be a two-story shopping complex in the form of a closed rectangle with an inner courtyard, which leads to six gates.
‍
By 1811, the foundation and walls of the first floor were built. However, a fire broke out on July 9-11, destroying most of the houses and buildings in Podil. The money from the construction of the yard was used to eliminate the consequences of the fire. The following year, funding of the Hostynyi Dvir became impossible due to The French invasion of Russia (1812). Then the first floor of the house was covered with a roof and left one story.
‍
In 1828, the reconstruction of the Hostynyi Dvir began according to the project of Andriy Melenskyi. In 1833, construction work was completed to install a cornice, attic, and a new roof with an iron coating. In 1843–1854, the city council leased the shops of the Hostynyi Dvir, and the redeemers rebuilt the facades and walled up the arched galleries.
‍
In 1976, a decision was made to demolish the old Hostynyi Dvir and build a new one in its place, according to Ruska`s project. The author of the research and project was the architect Valentyna Shevchenko. Measurements and construction lasted from 1971 to 1993.
‍
In 2011 the Hostynyi Dvir was excluded from the list of attractions. In 2012, the Kyiv City Council leased the Hostynyi Dvir to PC “Ukrrestavratsiya” to reconstruct a building for a shopping center. It provoked protests, and “Hostyna Respublika” appeared in the yard, holding concerts, lectures, and other meetings. In 2013, a fire broke out on the roof of the yard, which relocated the library and the Institute of Restoration. In the same year, “Berkut” dispersed the protesters. 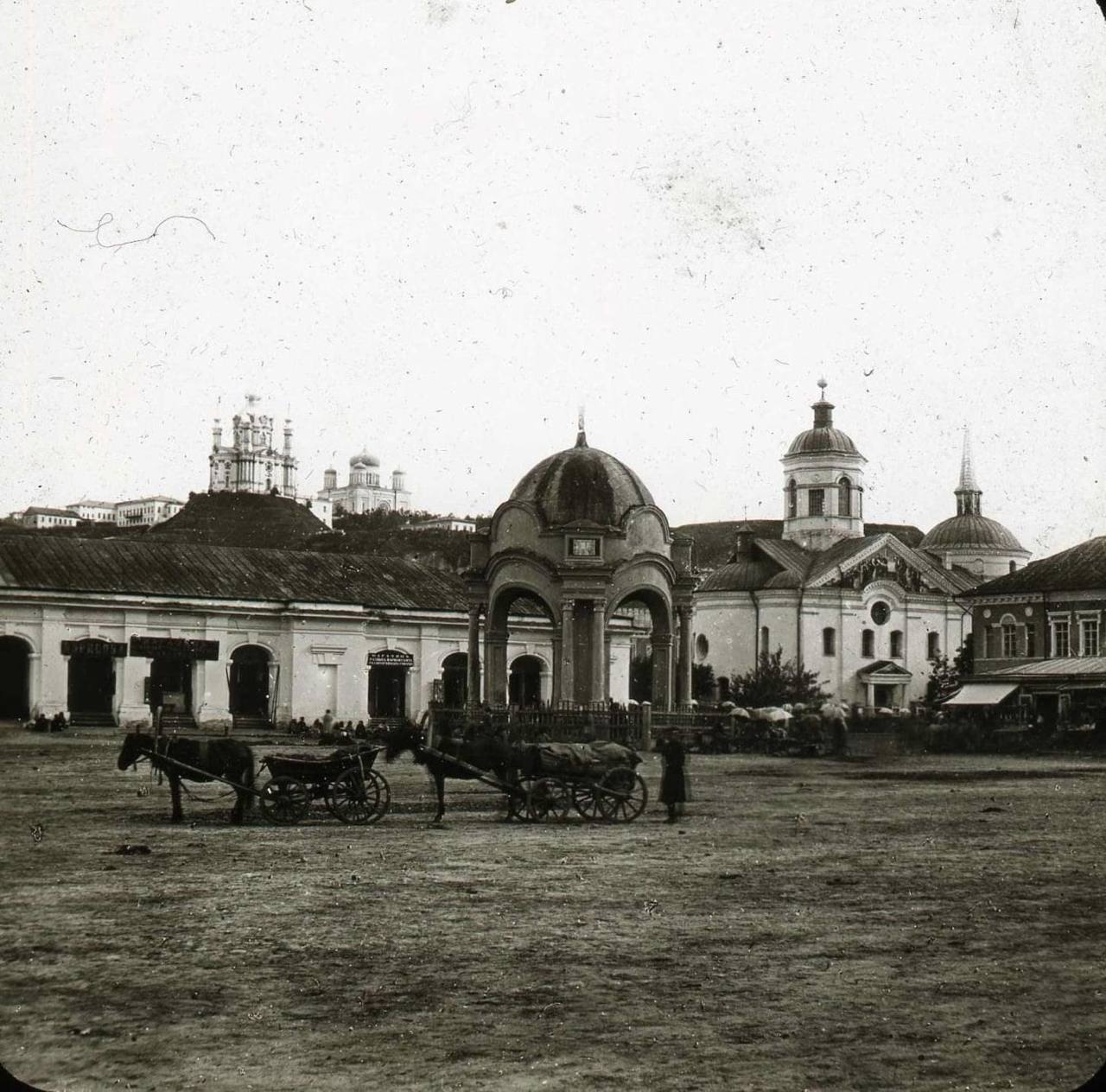 Photo of the Hostynyi Dvir in the 1860s

The purpose of the study was to investigate the current state of Kontraktova Square and understand citizens' expectations regarding the renovation of the Hostynyi Dvir. We counted the flow of pedestrians, mapped activities in the square, and conducted online surveys of Kyiv residents and workshops with interested residents. The polls were shared on Facebook. The study covered 1,900 respondents who shared their ideas on what should be in the Hostynyi Dvir and the state of Kontraktova Square.
‍
We talked about the values ​​of the Hostynyi Dvir with the focus group participants. The participants expressed the idea that the critical value of attraction is its communicative function, and it should constantly be open to people at any time. This space should be for residents of Kyiv and tourists. They should show only unique things, and there should be no mass or low-quality trade.
‍
We collected respondents' expectations for the future of Hostynyi Dvir through focus group discussions and online surveys. Respondents are most supportive of ​​creating a multifunctional space in the building, where there will be cafes, shops, museums, libraries, etc. Kyivans also support the idea of ​​a cultural space that can combine a museum, exhibition space, theater, and other cultural institutions.
‍

The survey also contains the idea of ​​substandard trade. Kyivans almost unanimously do not support the creation of a mall on the site of the Hostynyi Dvir. 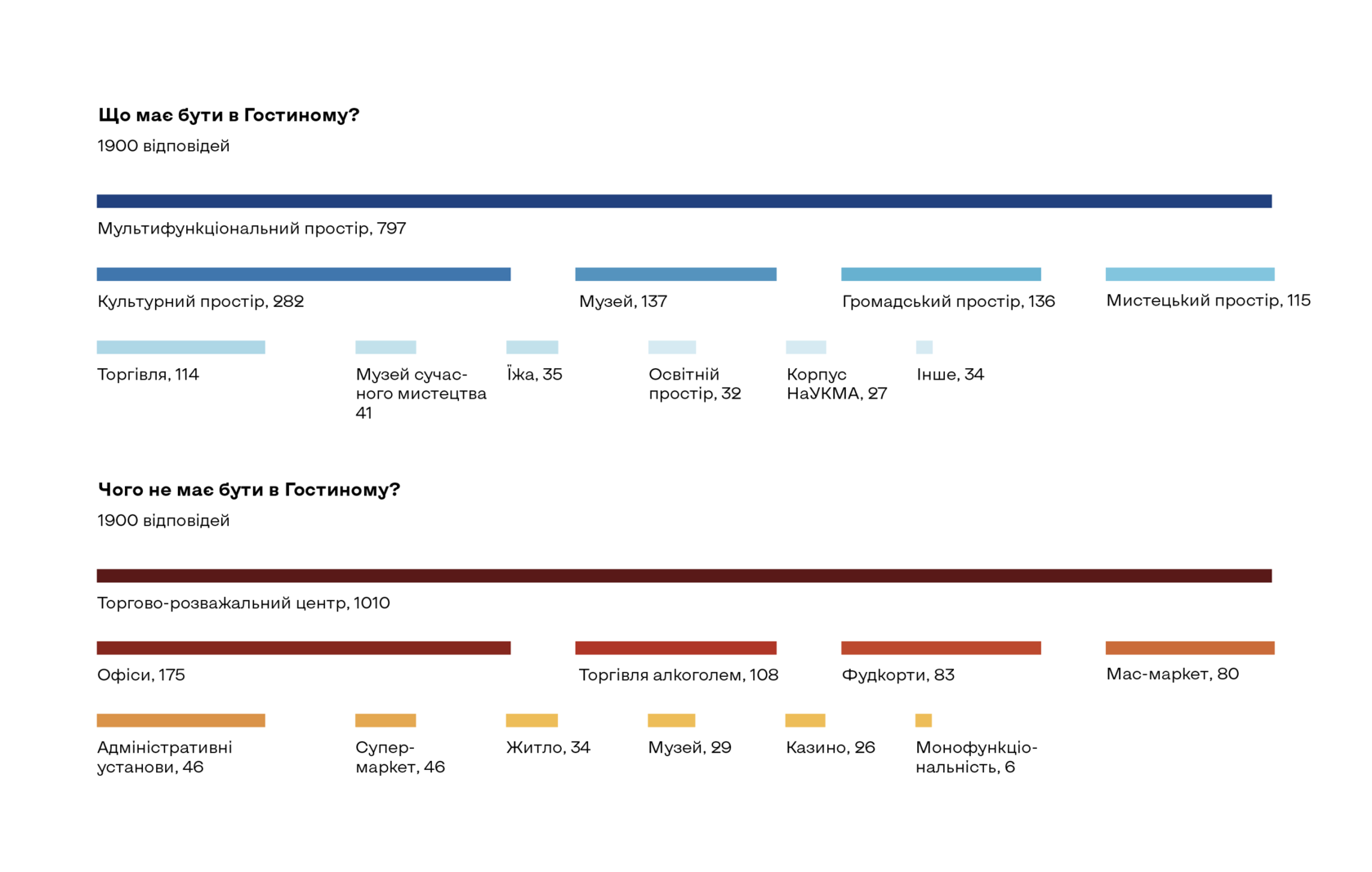 Activities in the square

There are various activities on Kontraktova Square: waiting, eating, cultural activities, listening to music, and drinking alcohol. They all depend on the time of day and day of the week. Most of the activities are located on the Kontraktova square and the square with the monument of Petro Sahaidachnyi. Although in the transport hub at the entrance to the subway, there are always people waiting for transport or other people.

In the square near the monument of Hryhoriy Skovoroda, the activity mainly takes place in the evening. It is due to kiosks where people buy food. In the evening, street musicians perform there.

The square often hosts various festivals on weekends, partially changing its activity. It has shops and a variety of entertainment. People are constantly drinking alcohol near the turn to Andriyivskyi Uzviz near the bar “Piana Vyshnia.” There is no such activity only in the morning and lunch on weekdays and in the morning on weekends. 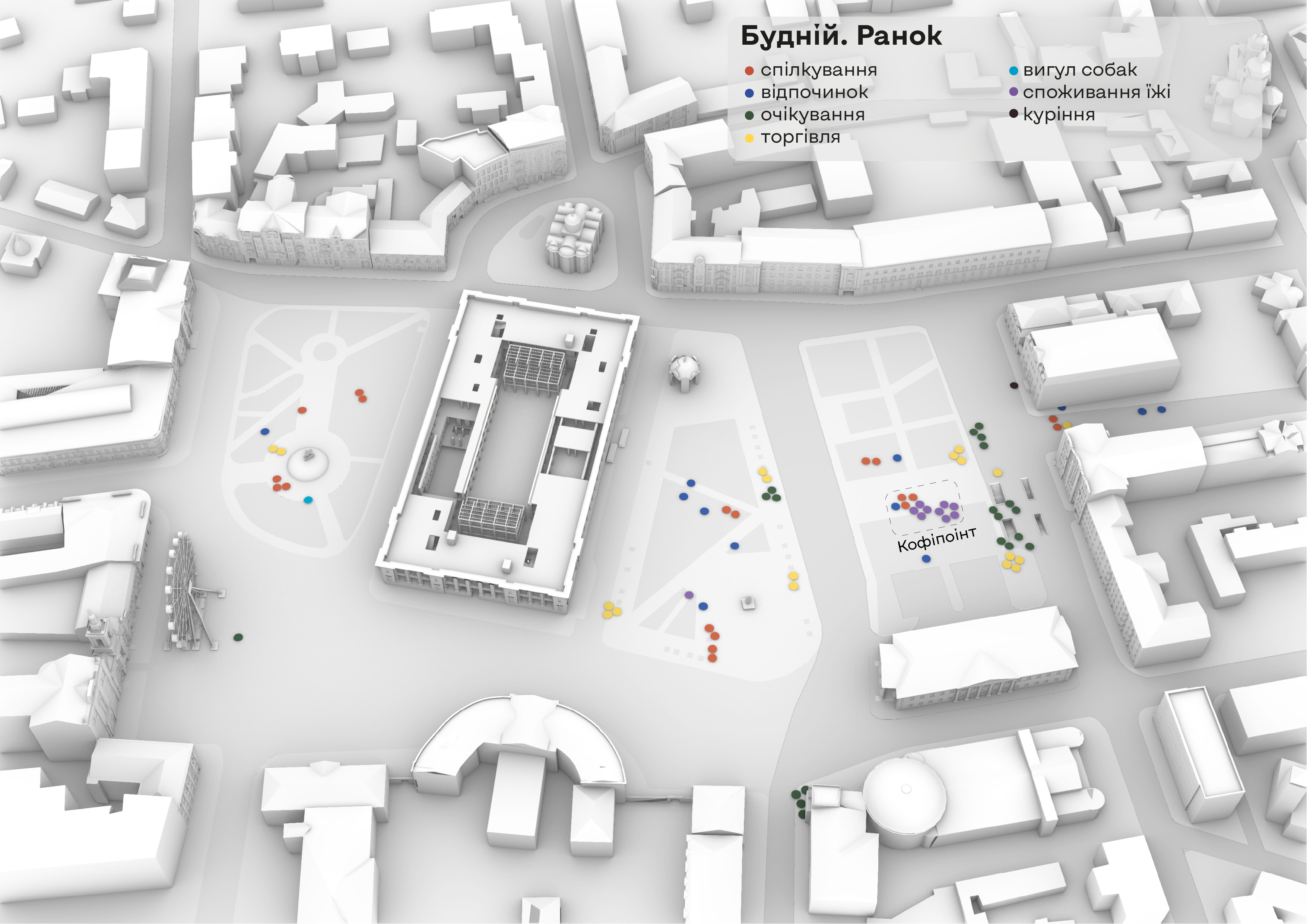 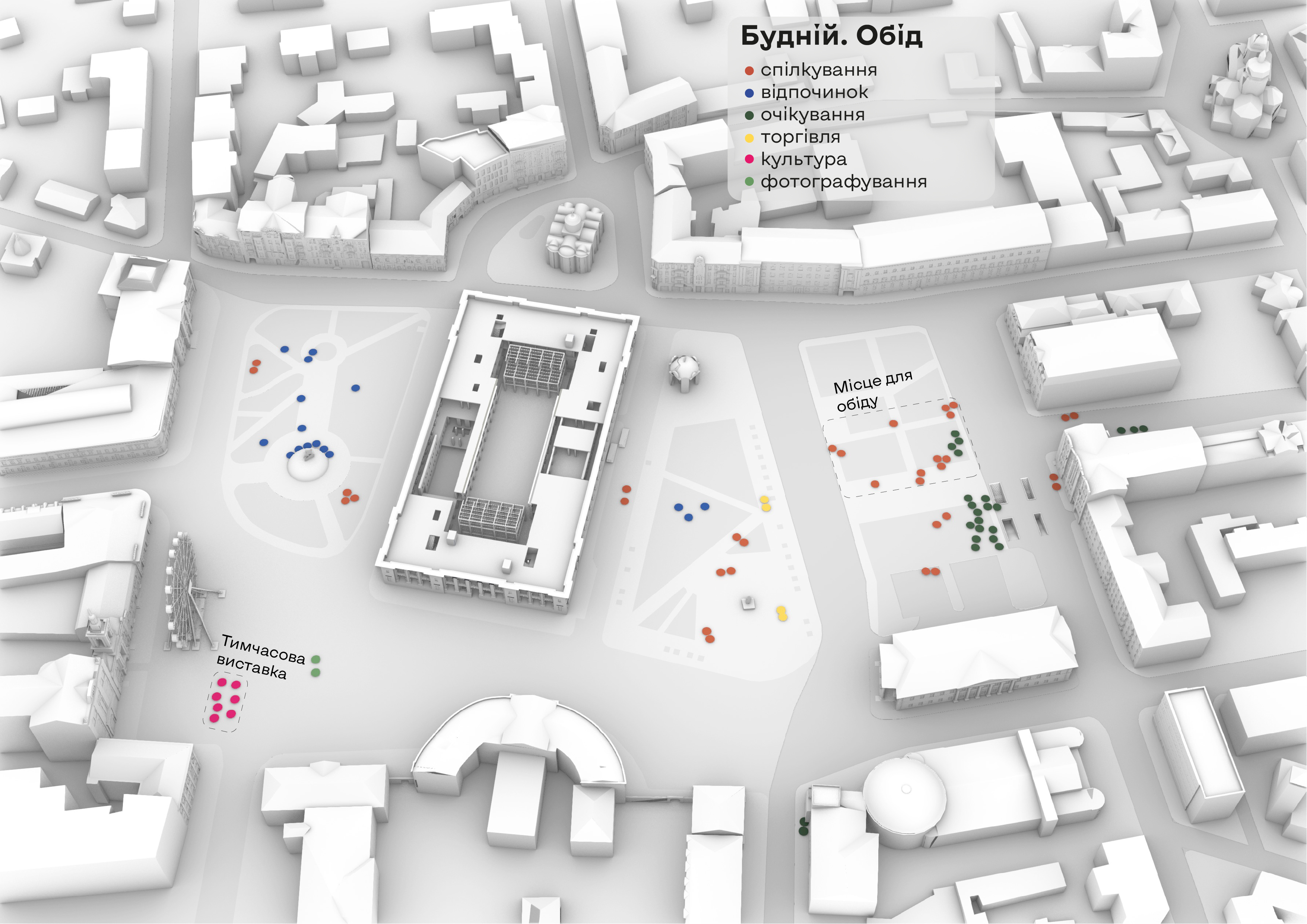 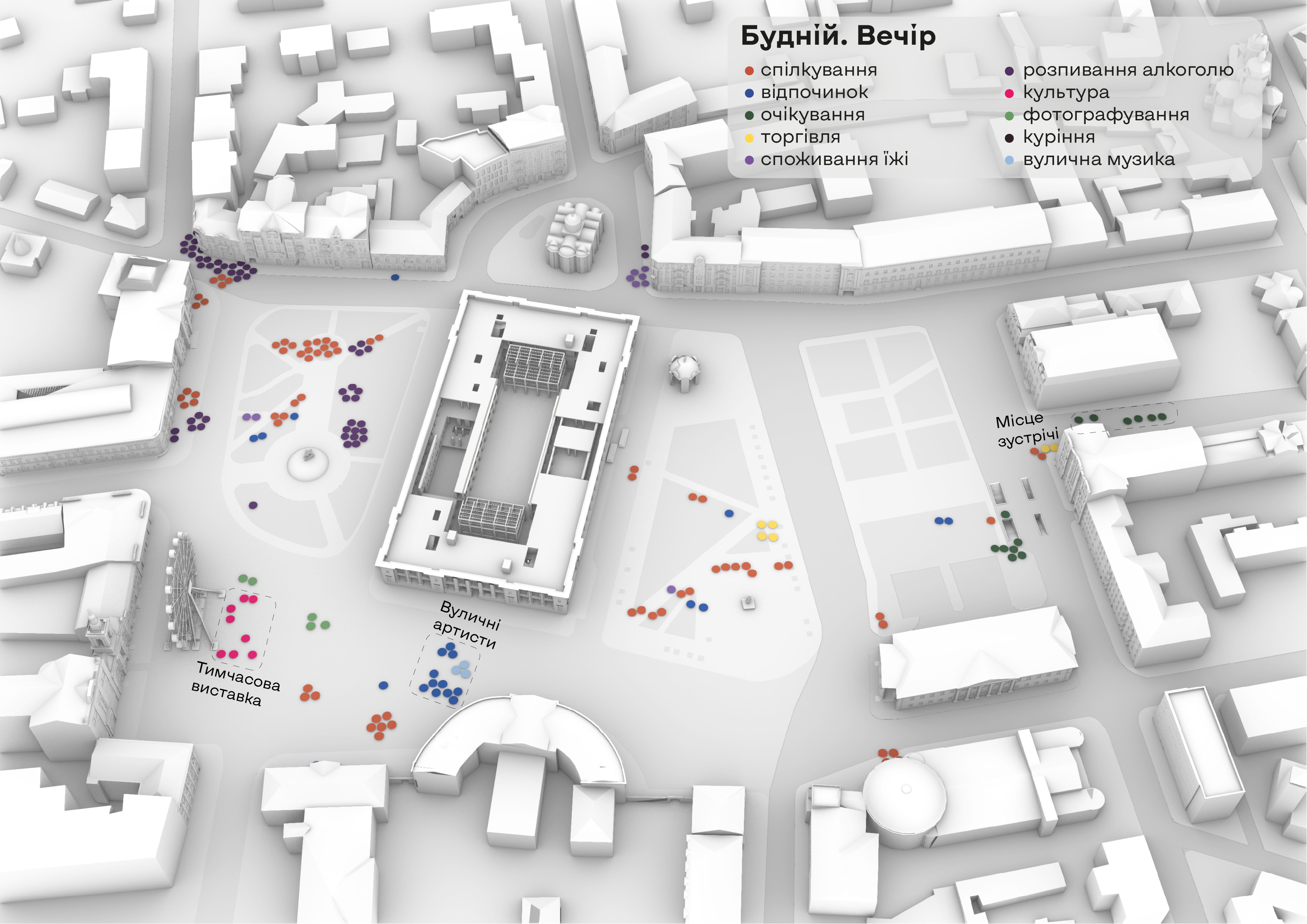 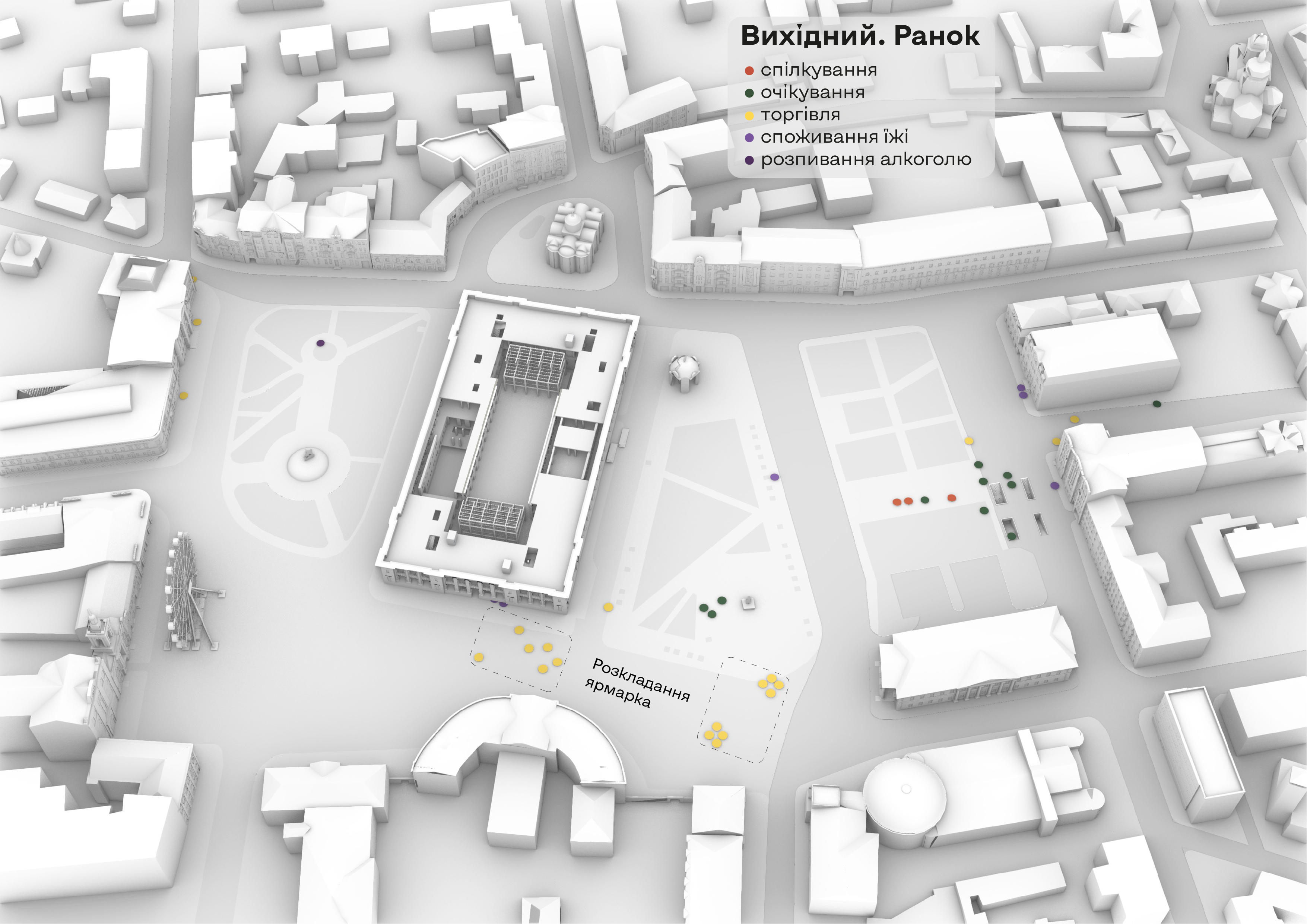 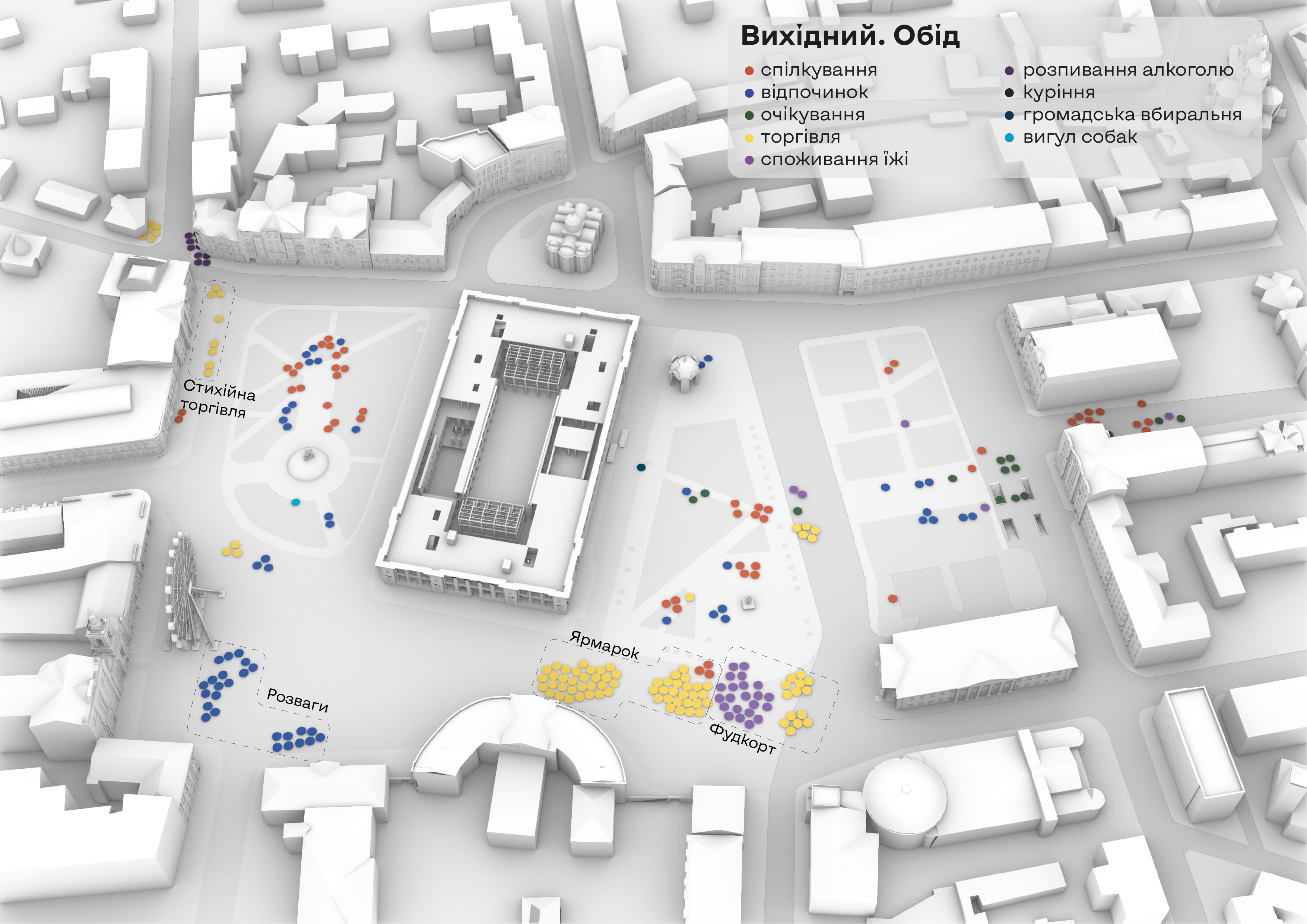 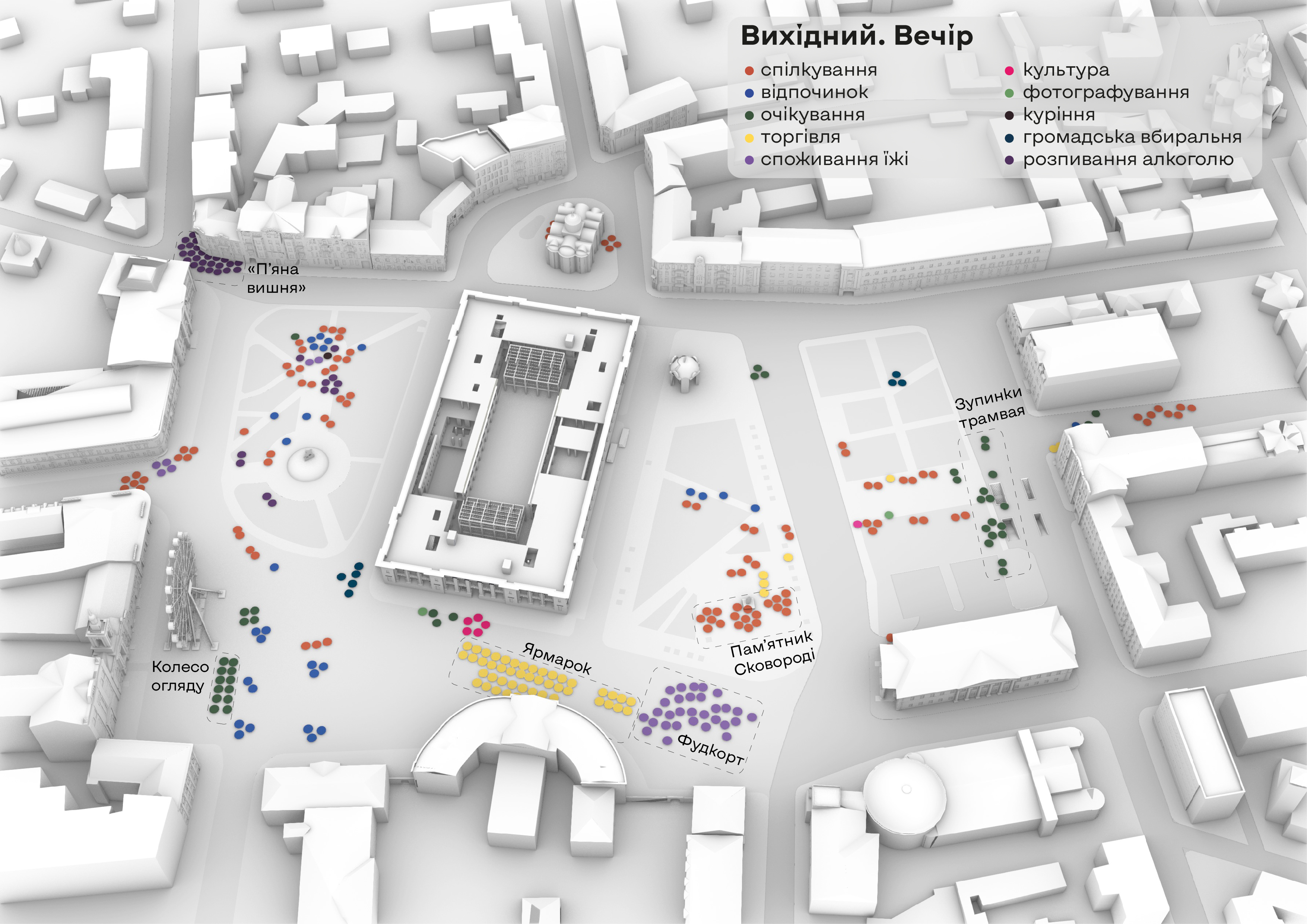 The main pedestrian flow goes from the metro station and reaches the Kontraktova Square, then people move to Sahaidachnoho Street. However, often they simply diverge in different directions of the square. The surrounding streets are almost inactive, but part of the street next to "Silpo" shop at noon on weekdays has heavy pedestrian traffic. 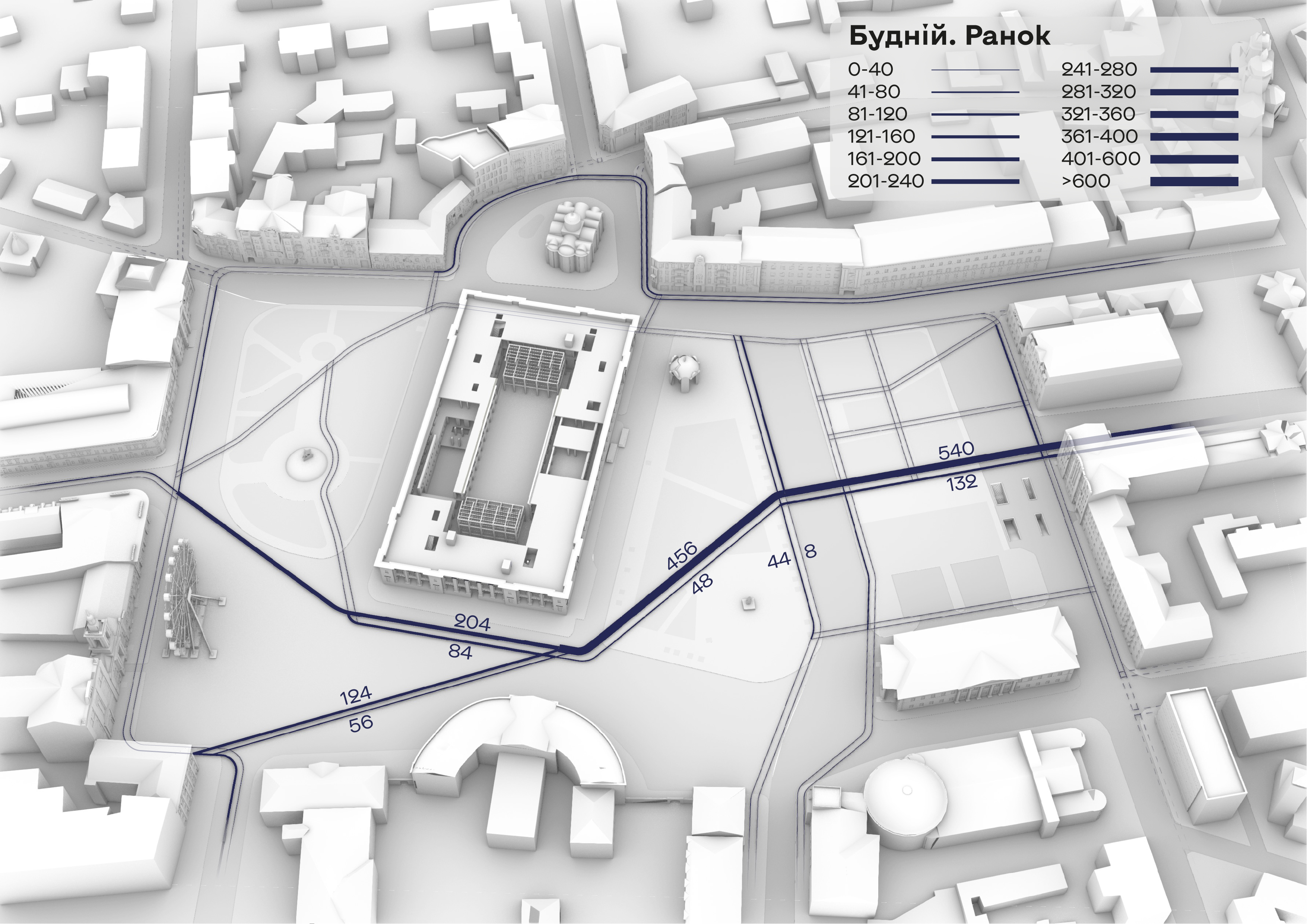 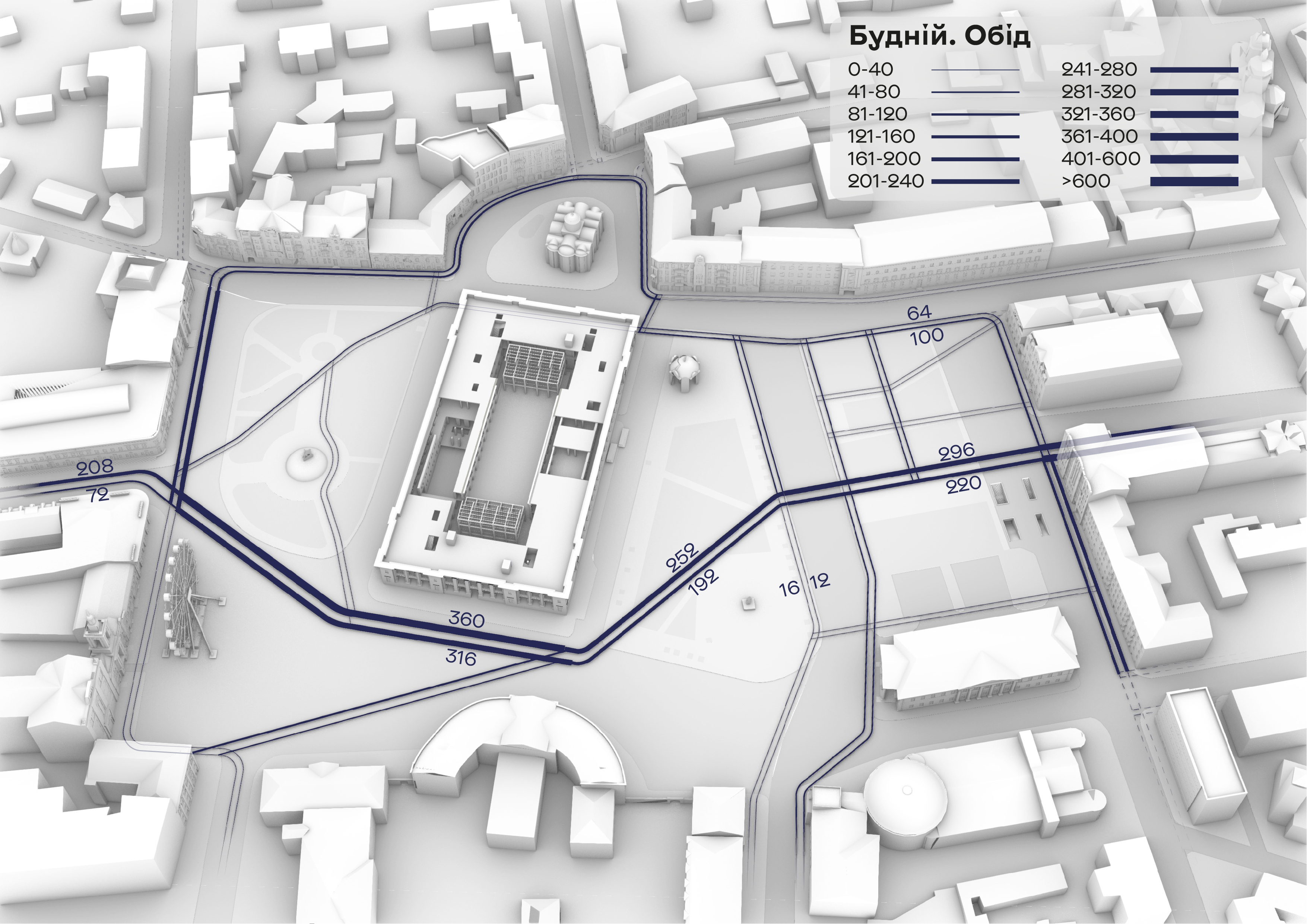 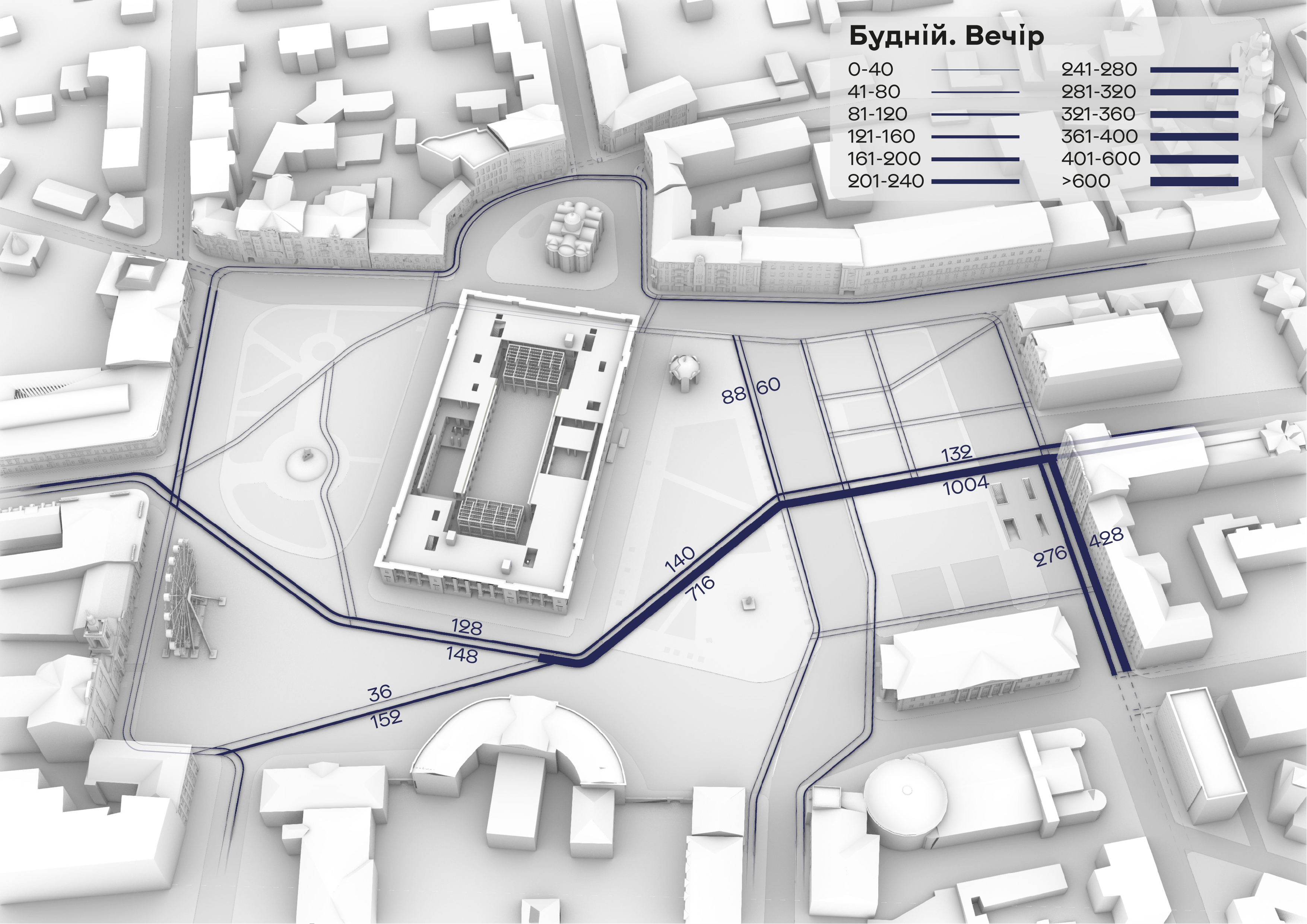 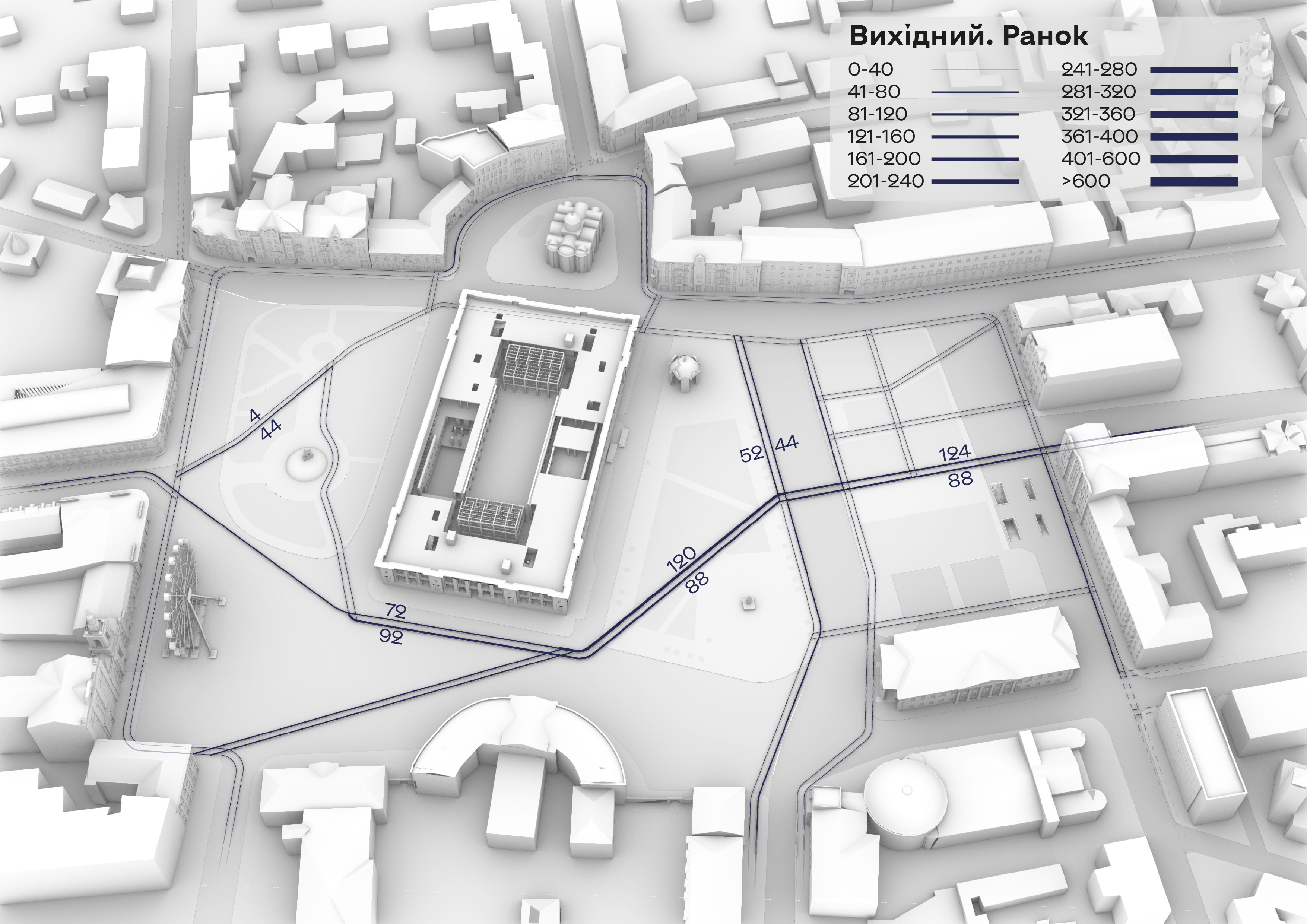 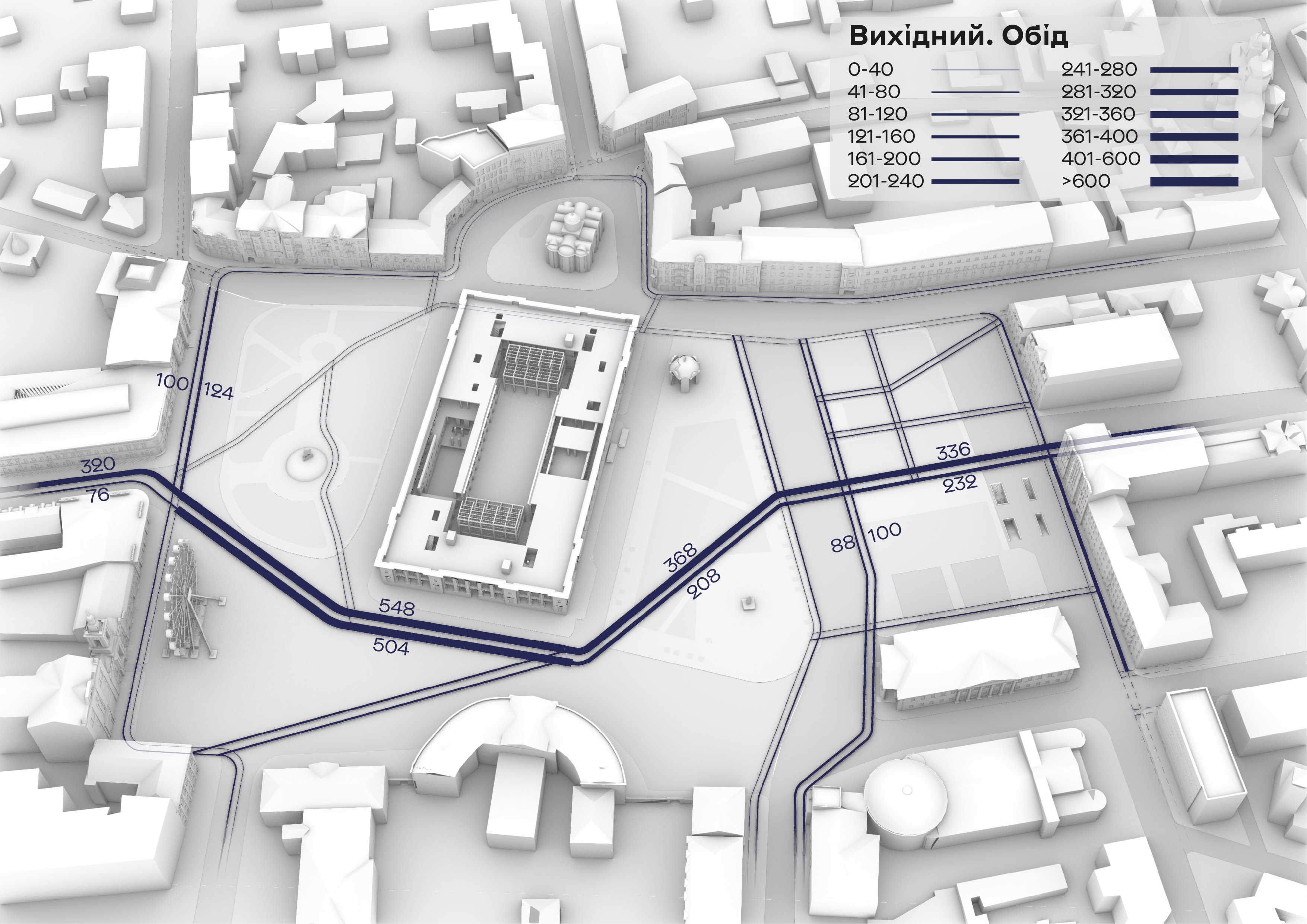 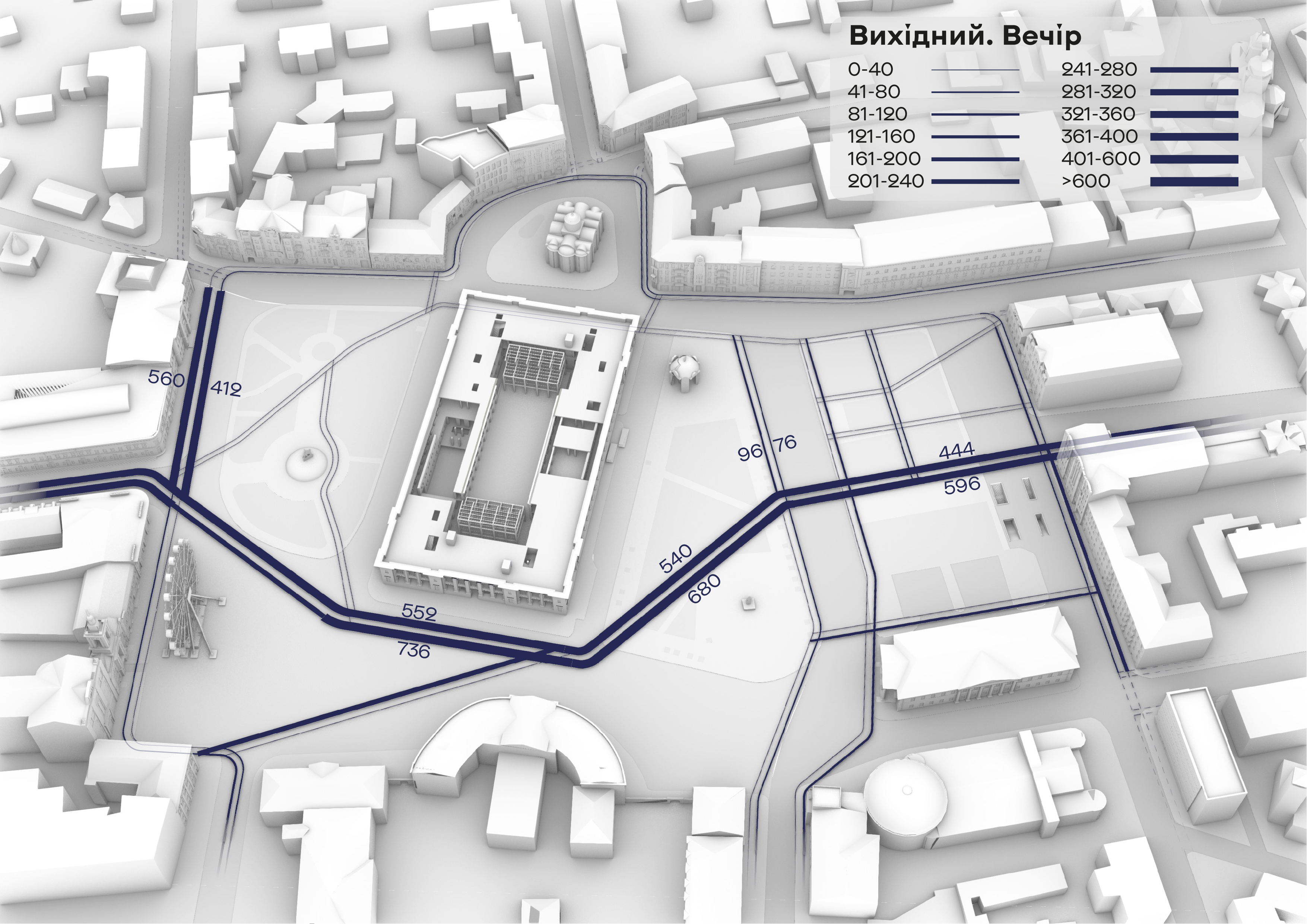 During the reconstruction, the Hostynyi Dvir was radically changed. An additional basement floor has appeared within the old courtyard, to which a ramp leads from the side of the National University of Kyiv-Mohyla Academy. As a result, the courtyard level rose to the first-floor level. At the ends of the courtyard, the original facades were demolished, and metal structures were added to expand the areas of the second and third floors.

In some areas, the original galleries with brick vaults were removed. At the four corners of the building were brick stairs with arches. Two of them were destroyed: on the corner near the Fontan of Samson and on the far side, which leads to the District State Administration. 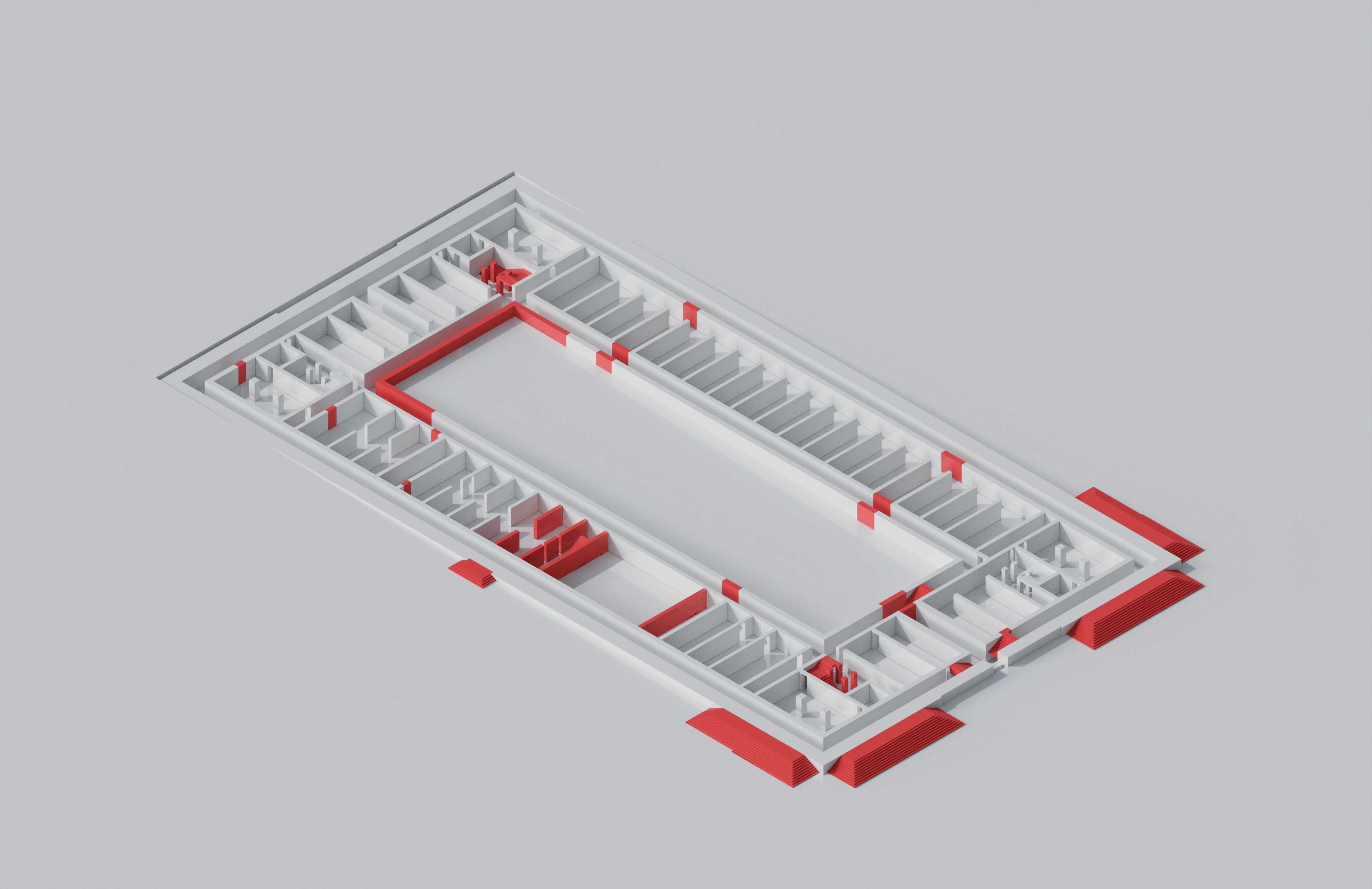 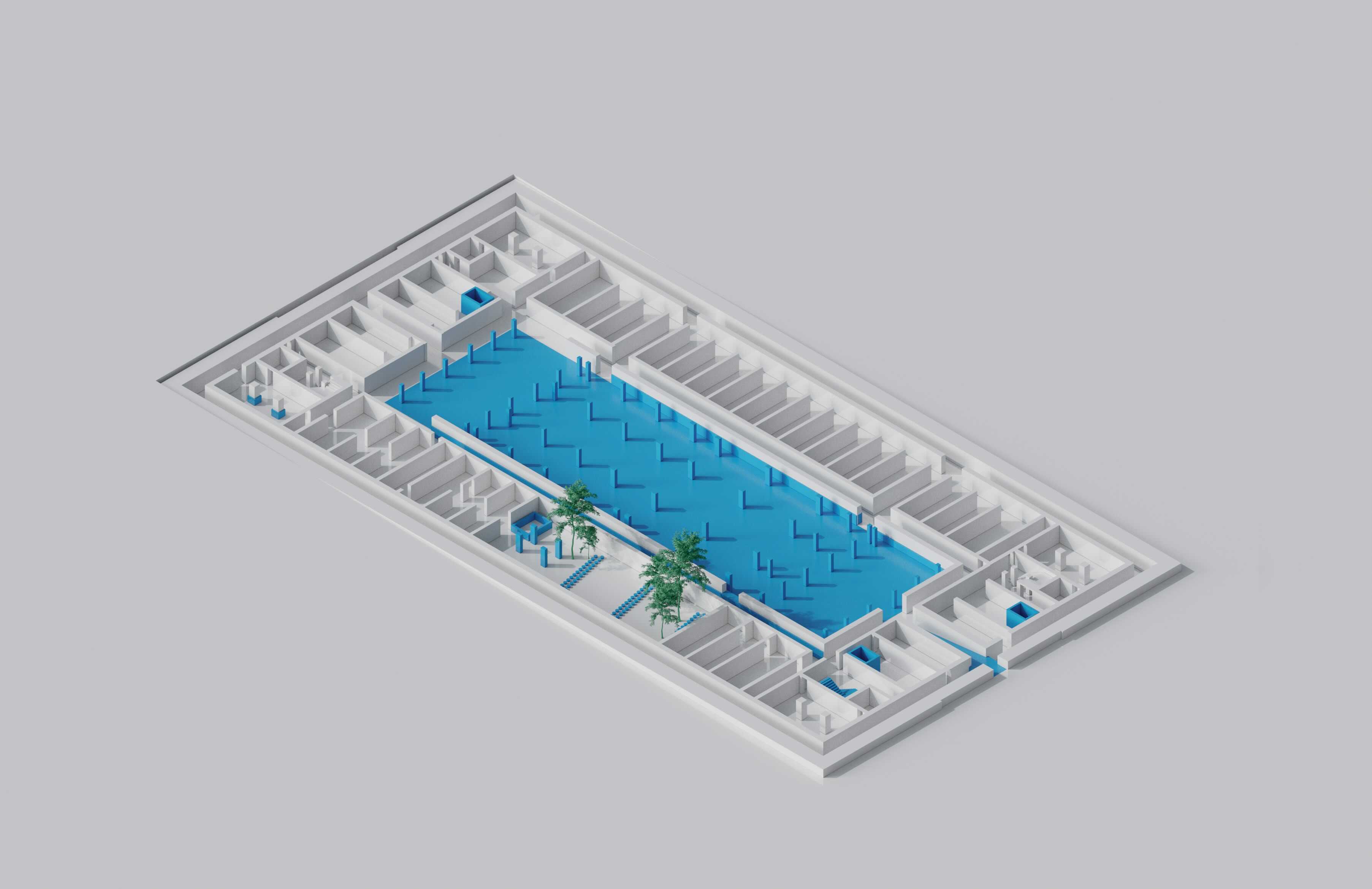 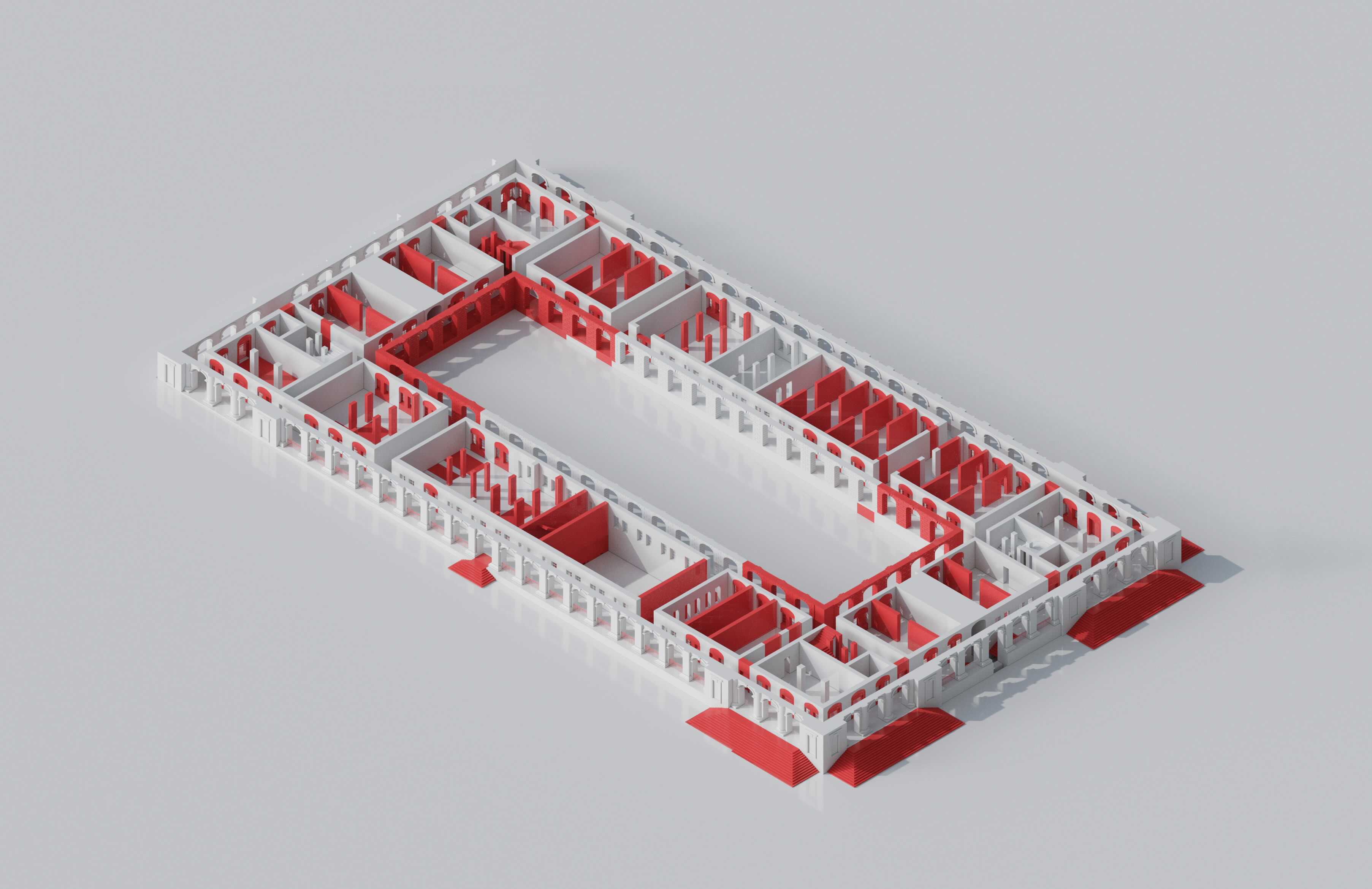 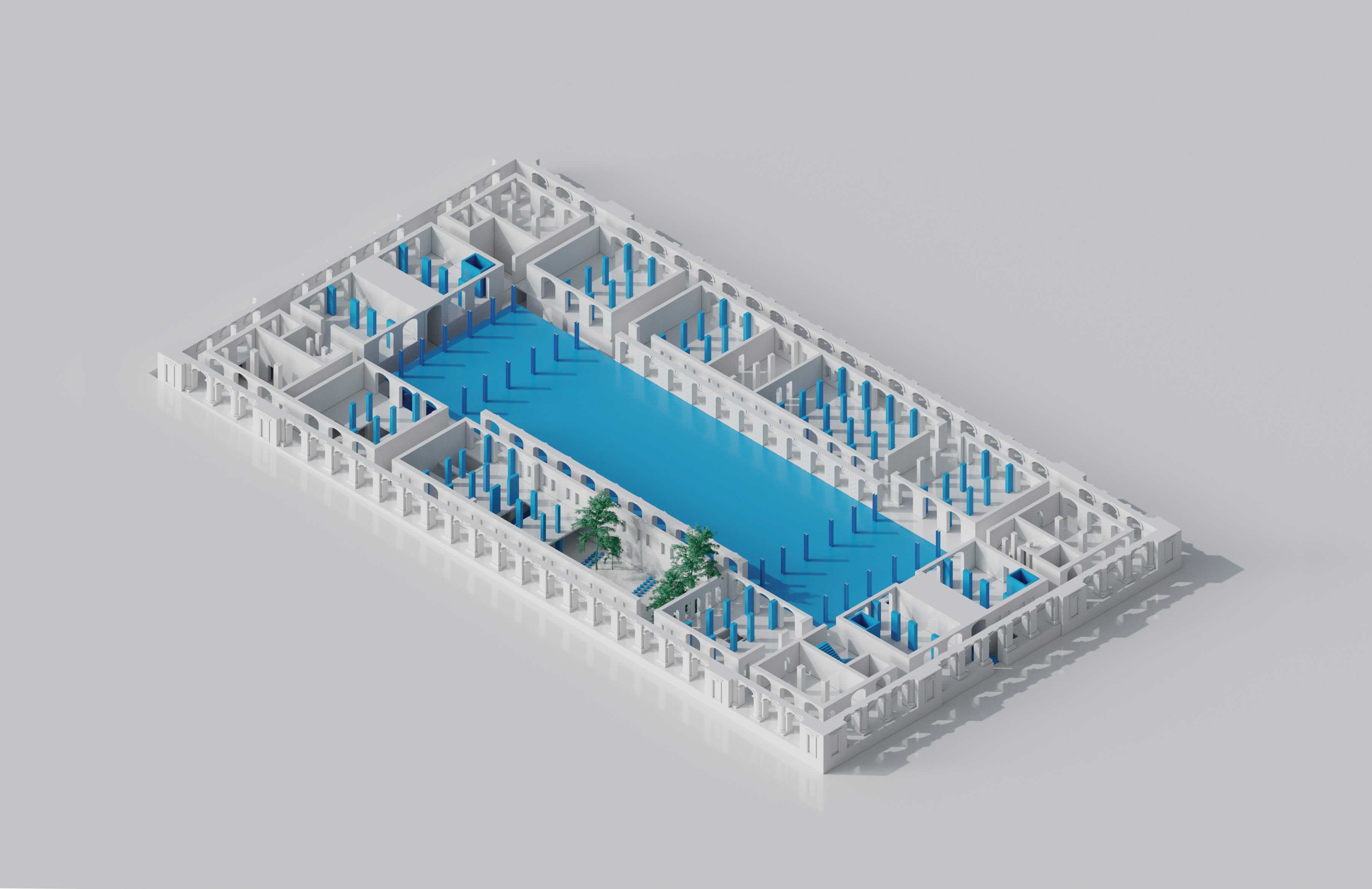 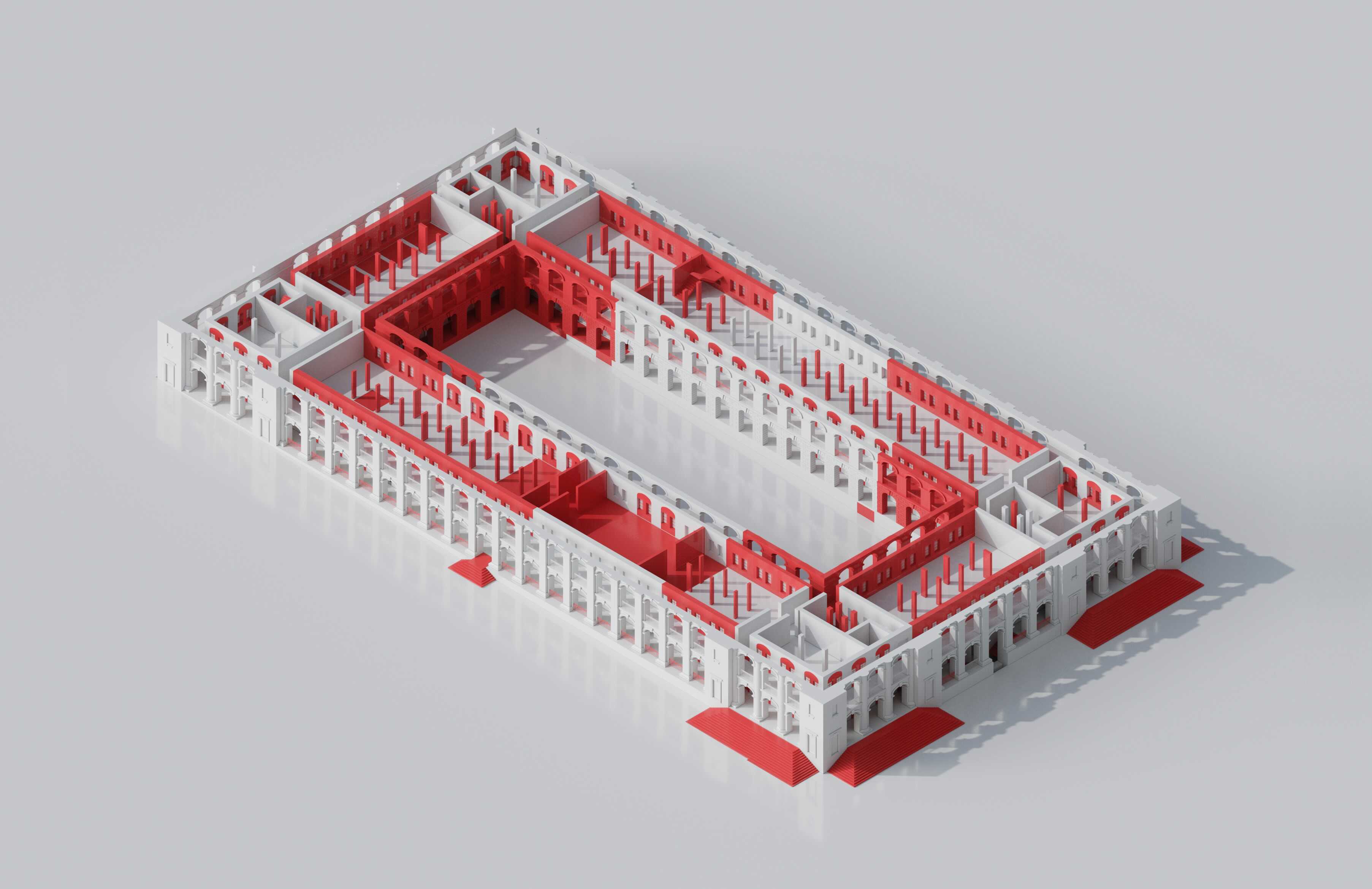 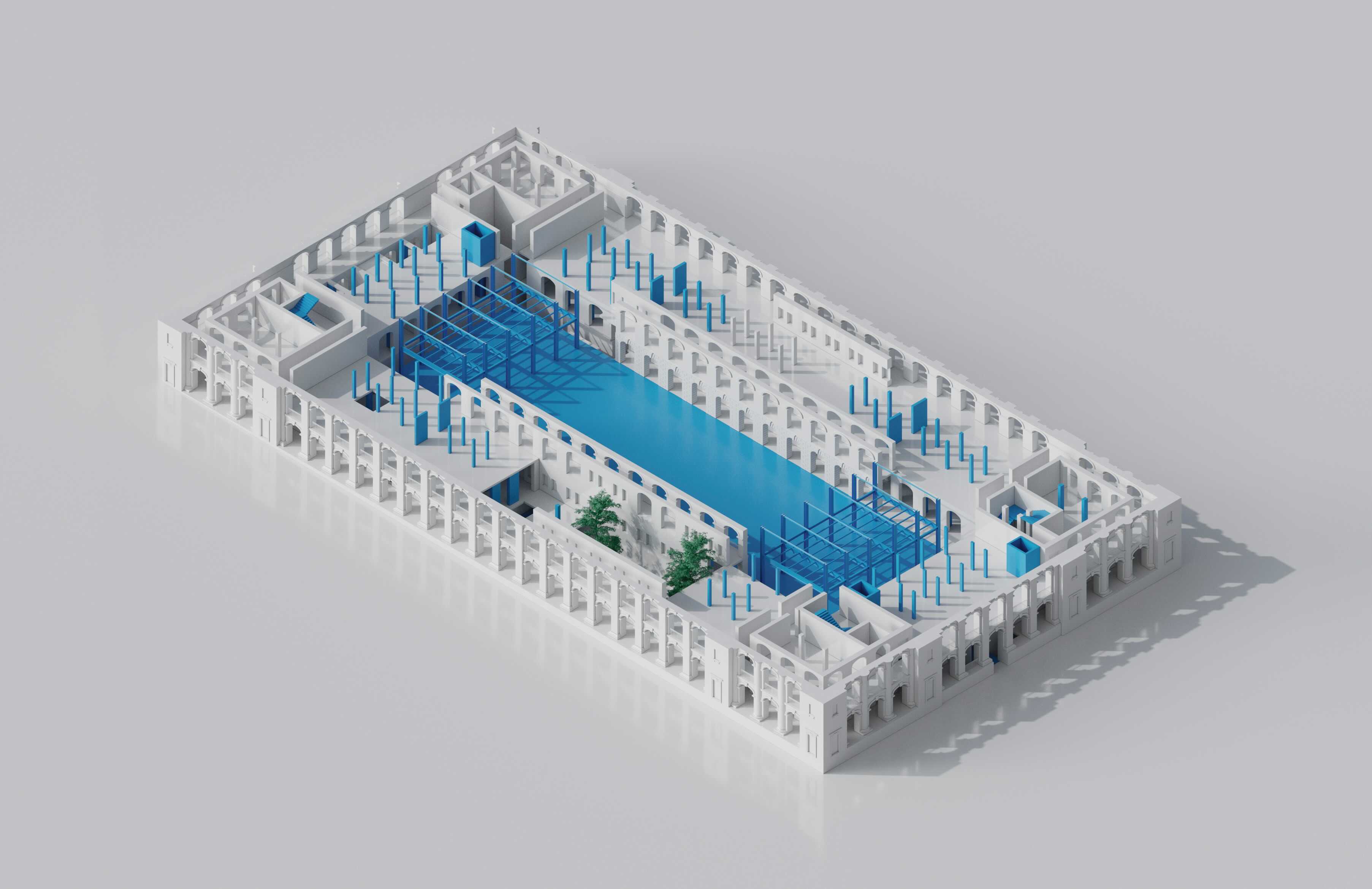 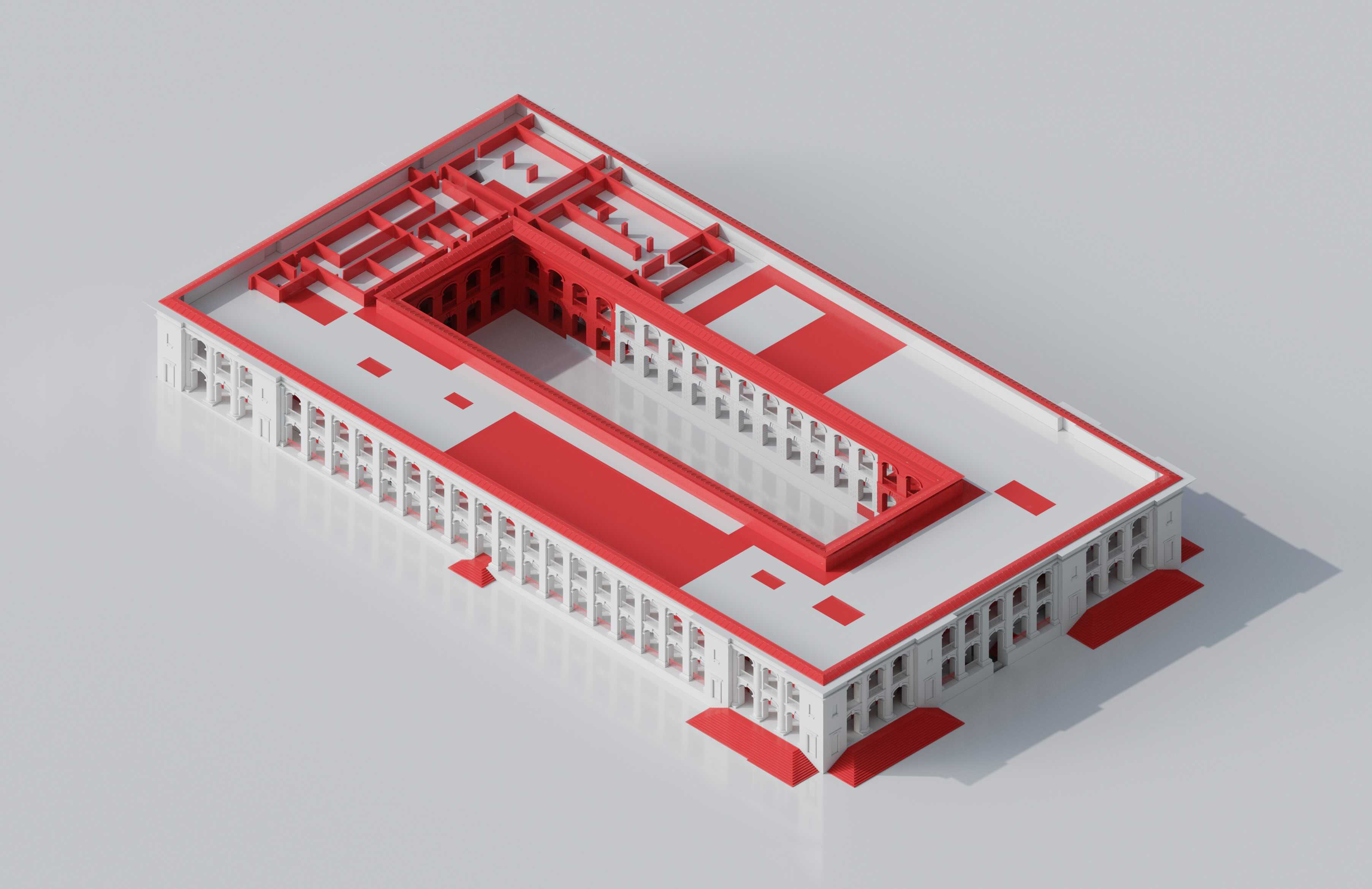 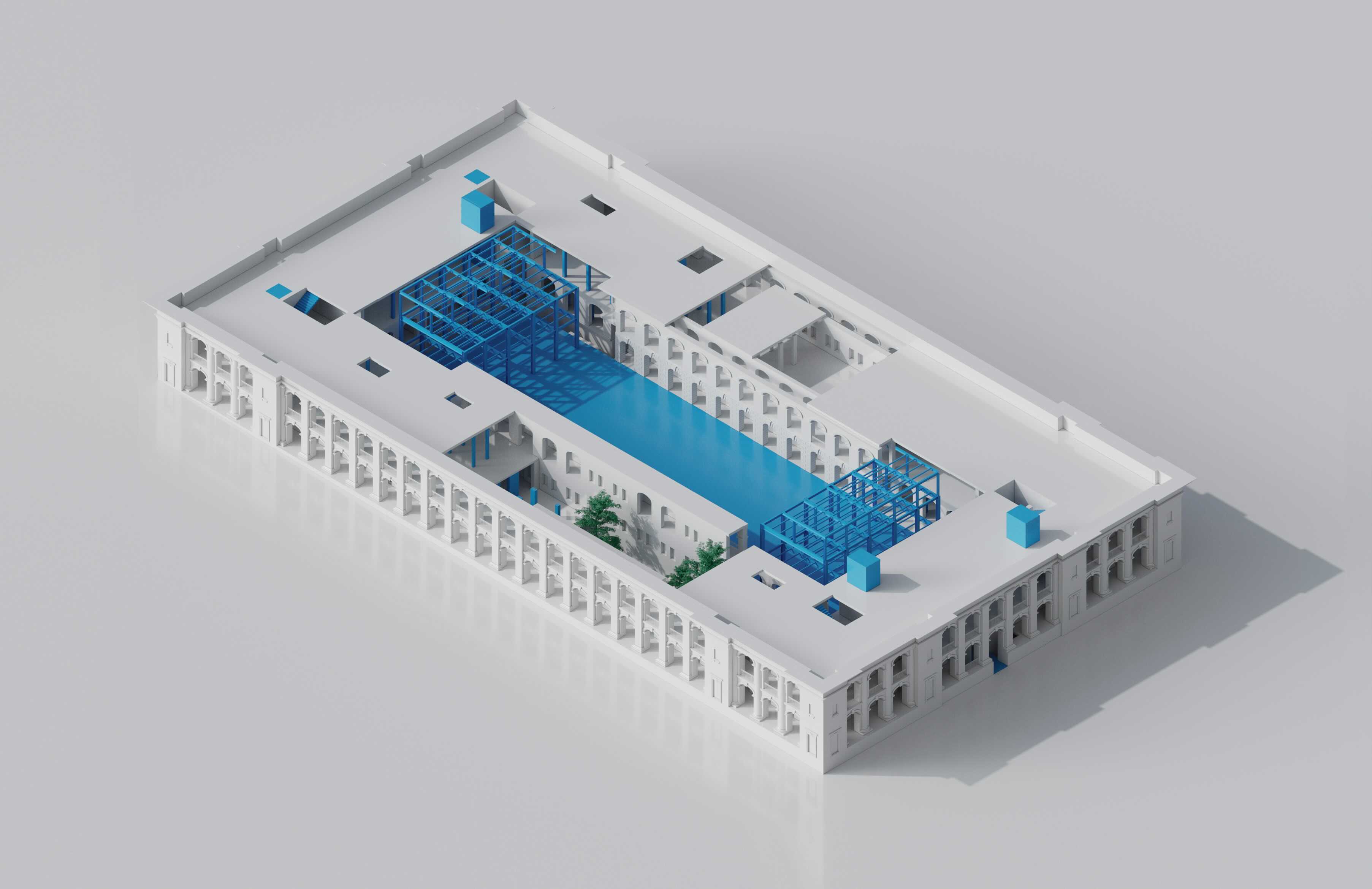 Program of the building

On November 25 and 26, specialists from various fields created a concept for the development of the Hostynyi Dvir. The participants were divided into 4 groups and suggested possible functions of the building based on world analogs and the results of a public survey. 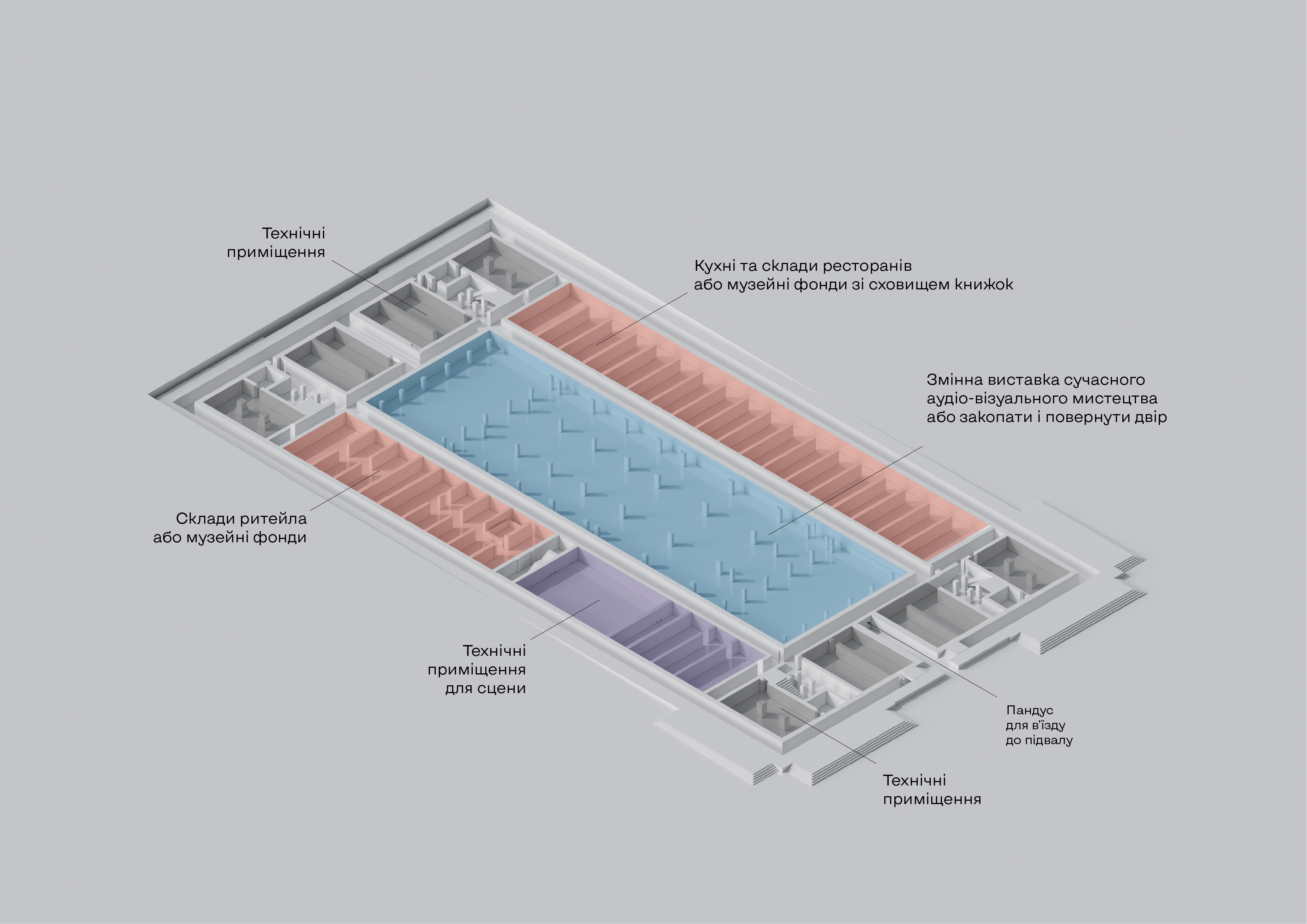 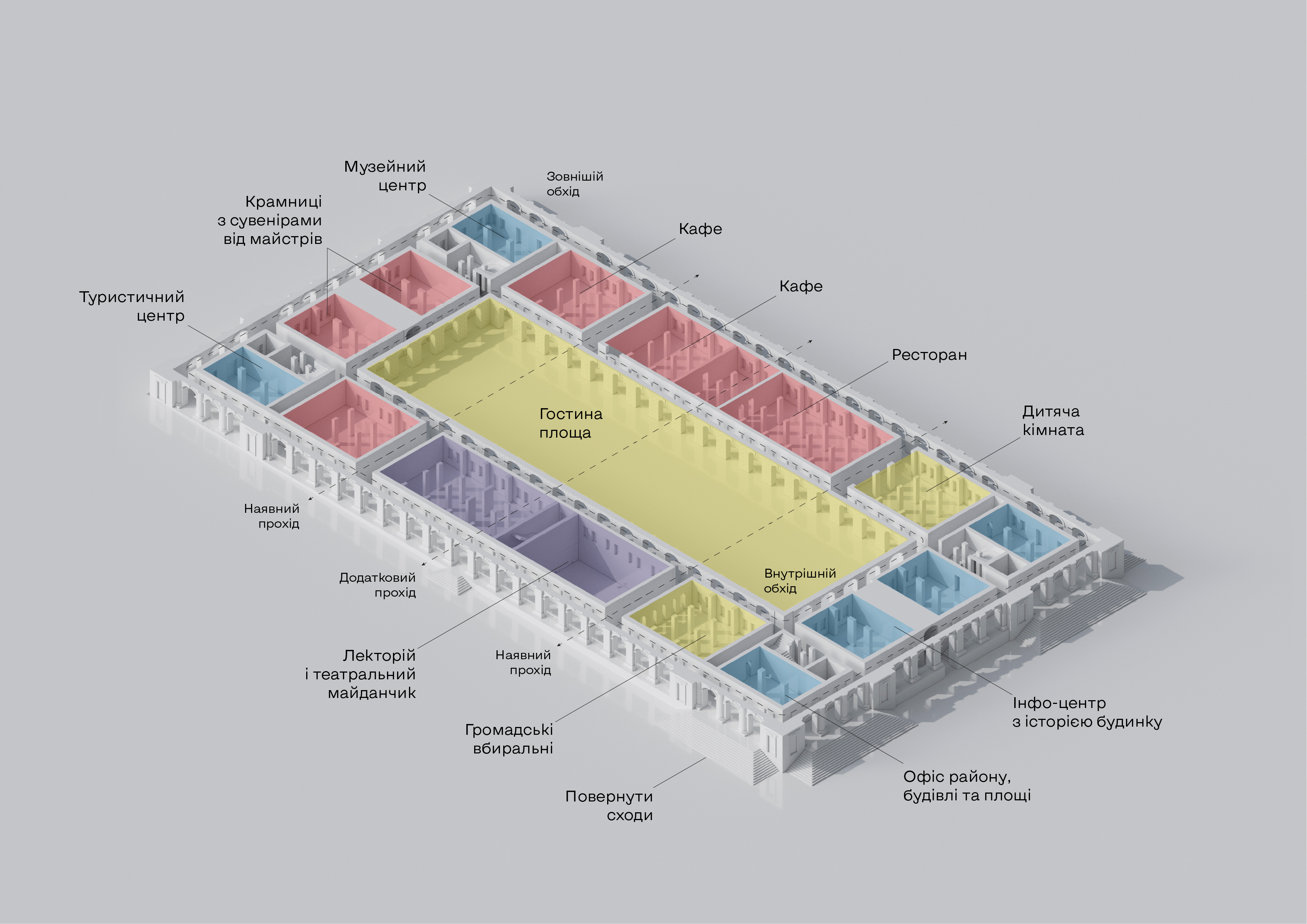 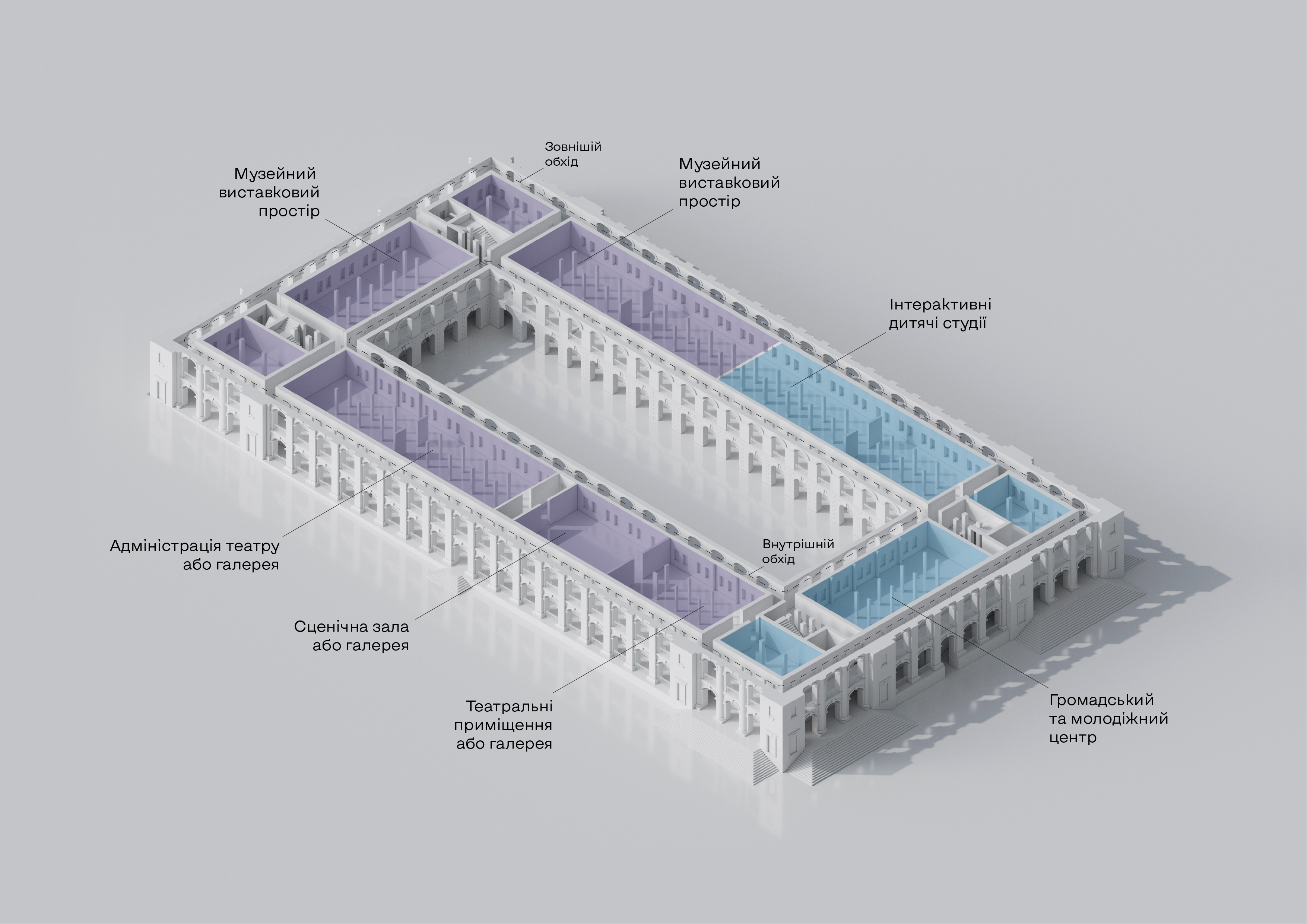 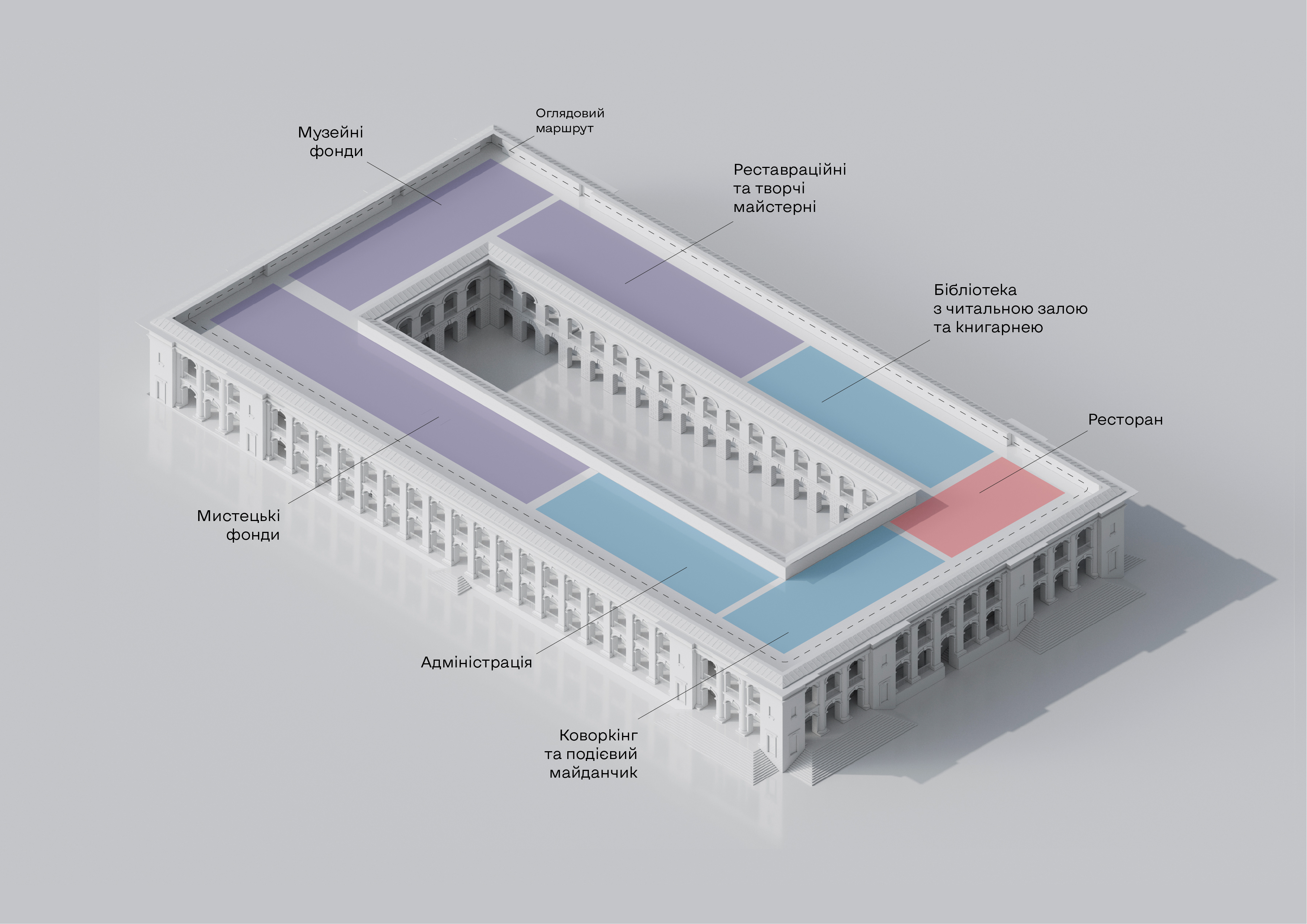 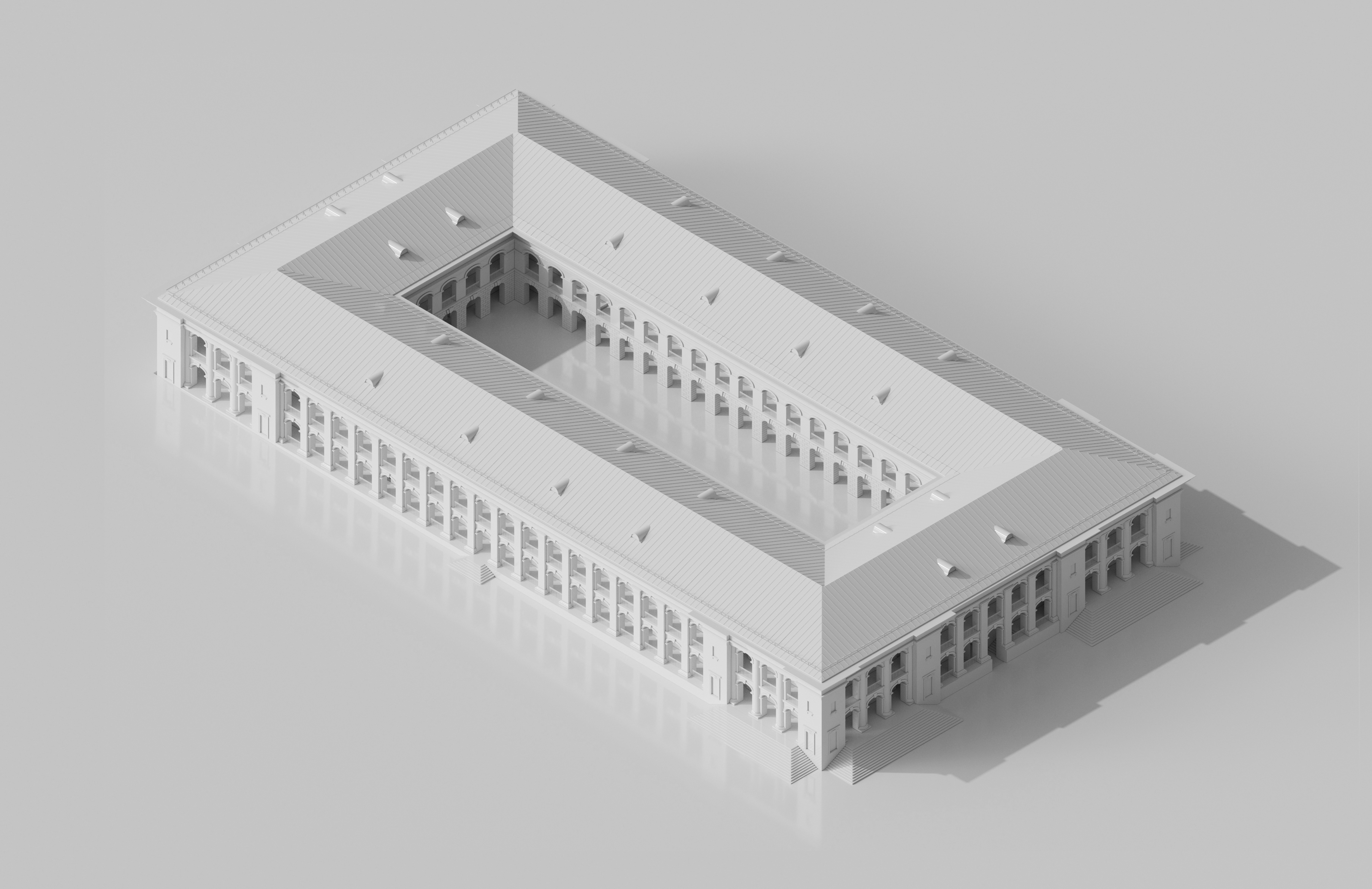 December 2021
‍
‍The project was made by