Throughout its history, the neighbourhood of Lypky has been a showcase for the city’s latest progress and achievements. First, the Mariinsky Palace was built there, followed by the Skyscraper of Hinsburg – the first in Ukraine – as well as the largest circus in Europe. Following World War II, which left a significant portion of buildings in Kyiv’s city centre in ruins, a new building was erected — at the time the tallest in the city and the home of Ukraine’s Cabinet of Ministers.

Gradually, this area was transformed into an administrative centre for the Ukrainian Soviet Socialist Republic (USSR) and later independent Ukraine; the block-like layout created an uncomfortable and unsafe environment for citizens. Since then, best practices for urban planning and development have changed. Lypky needs to align with this vision and establish a new strategy for change with a plan that brings modernity to life in the city. 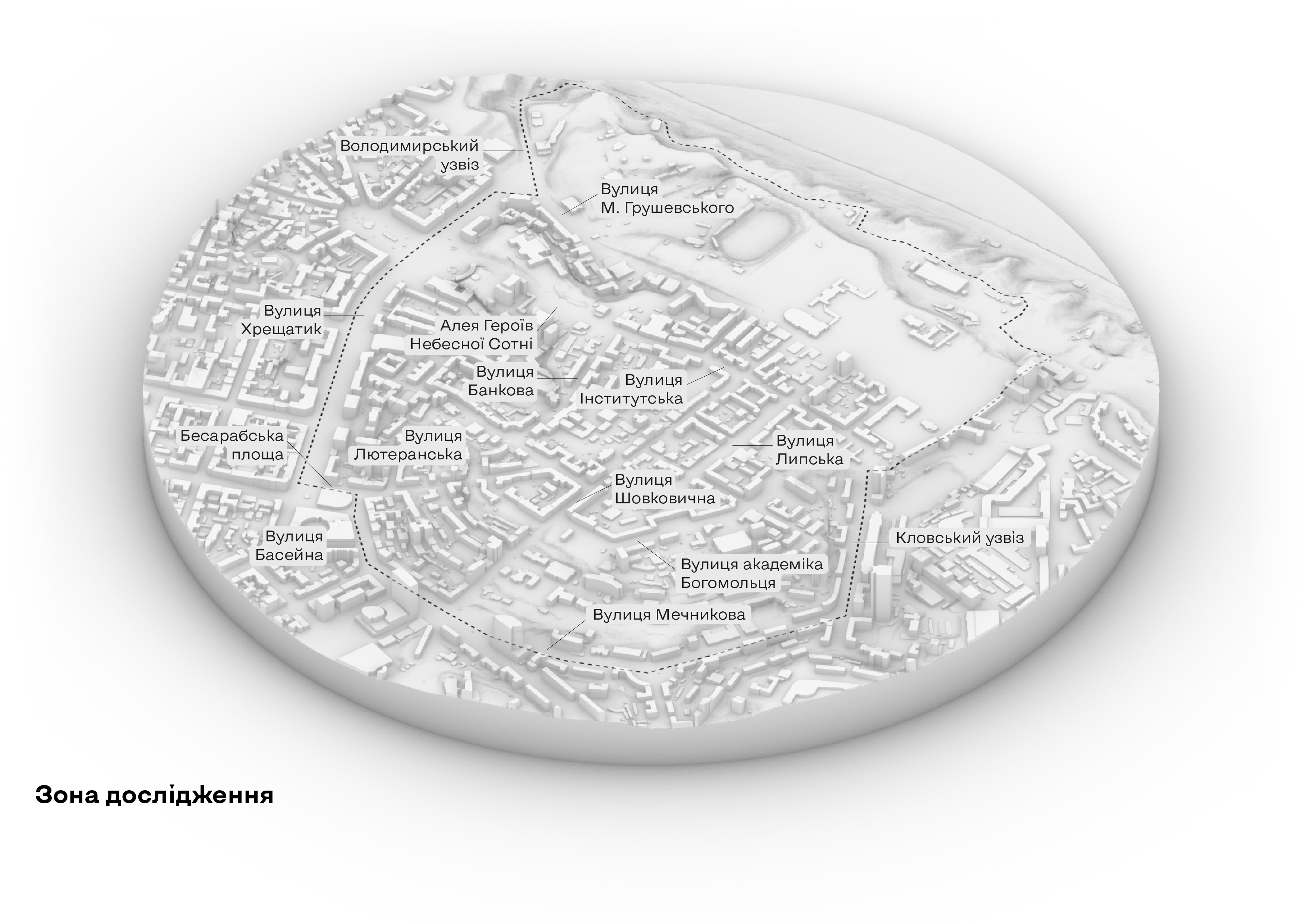 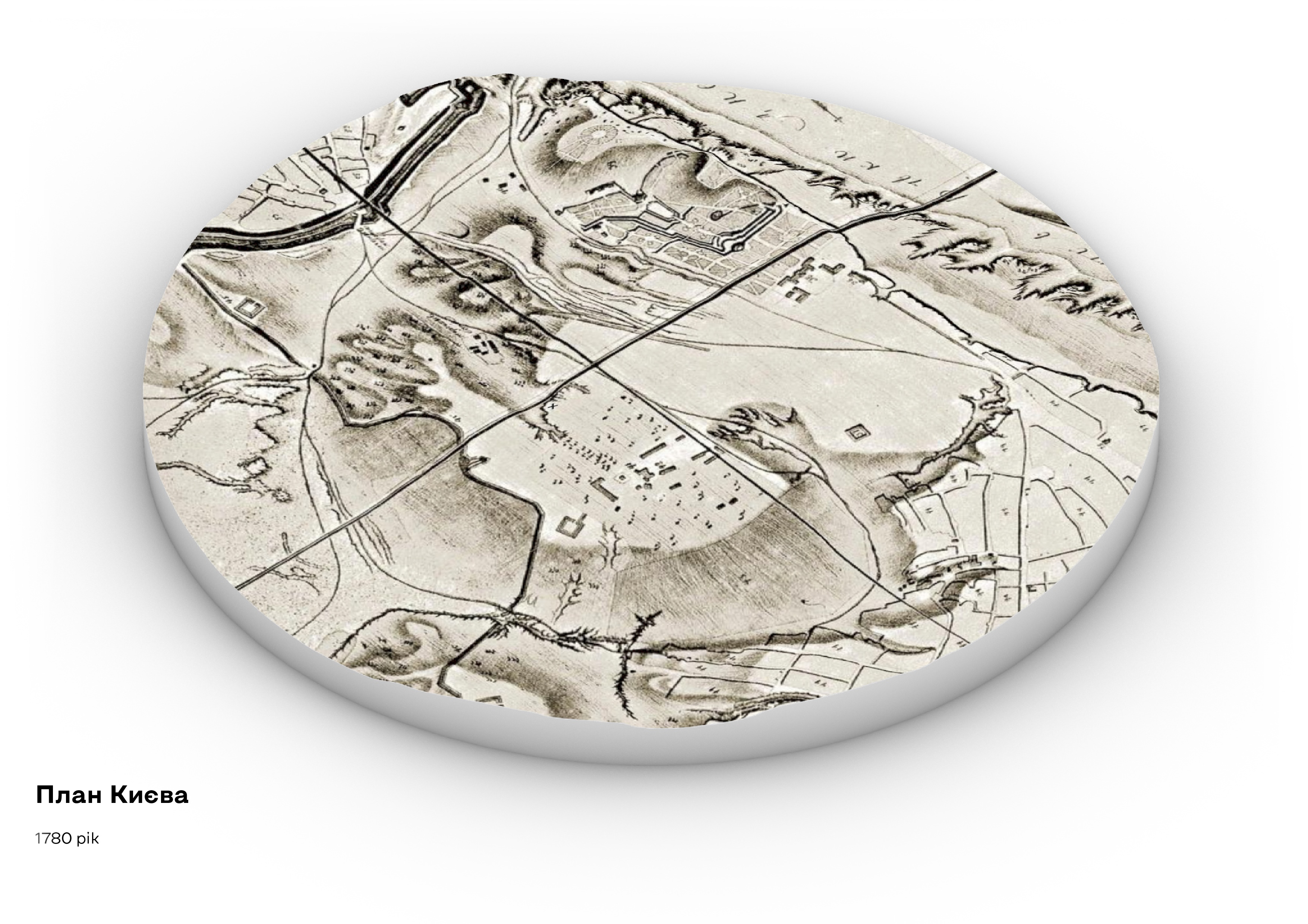 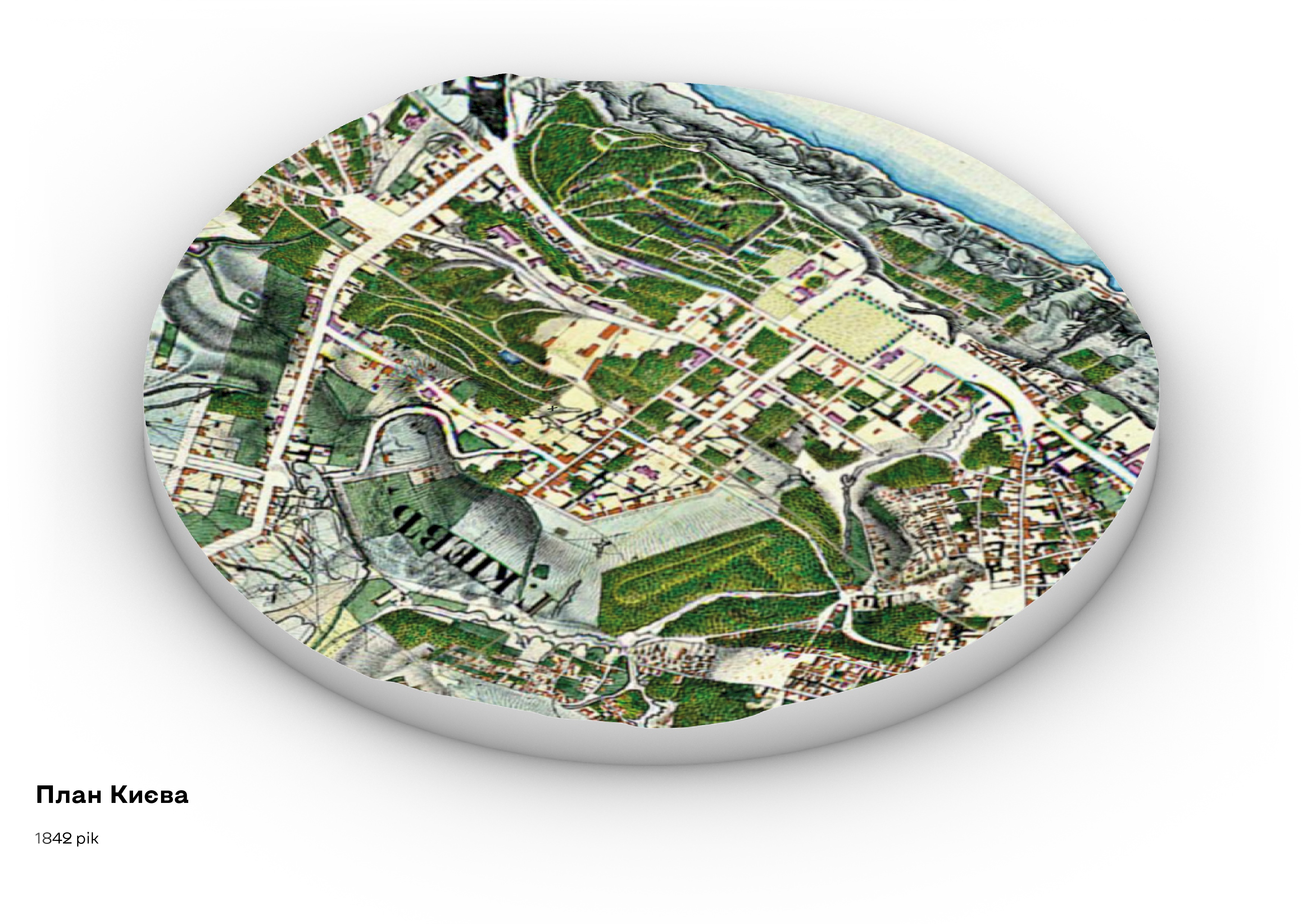 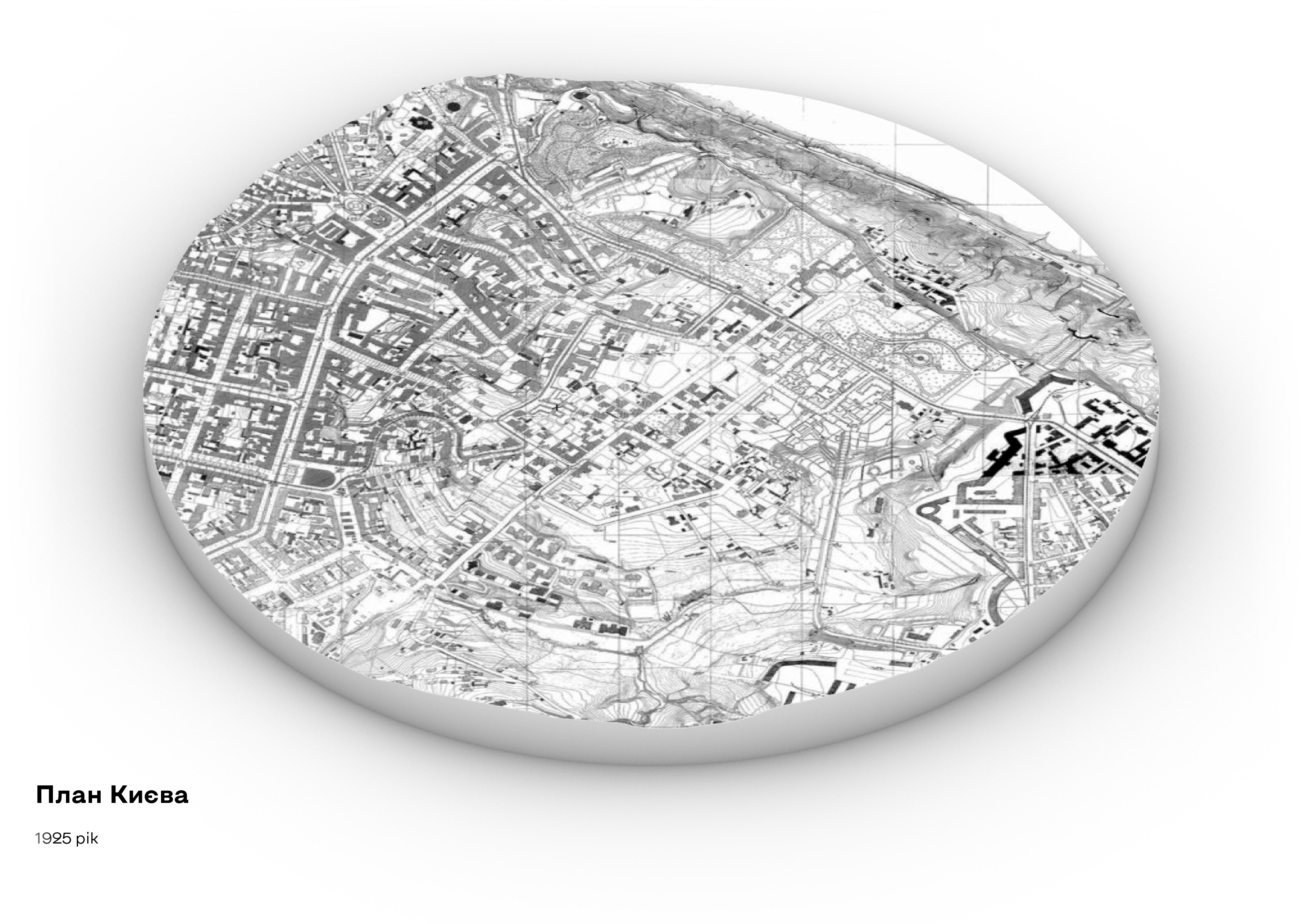 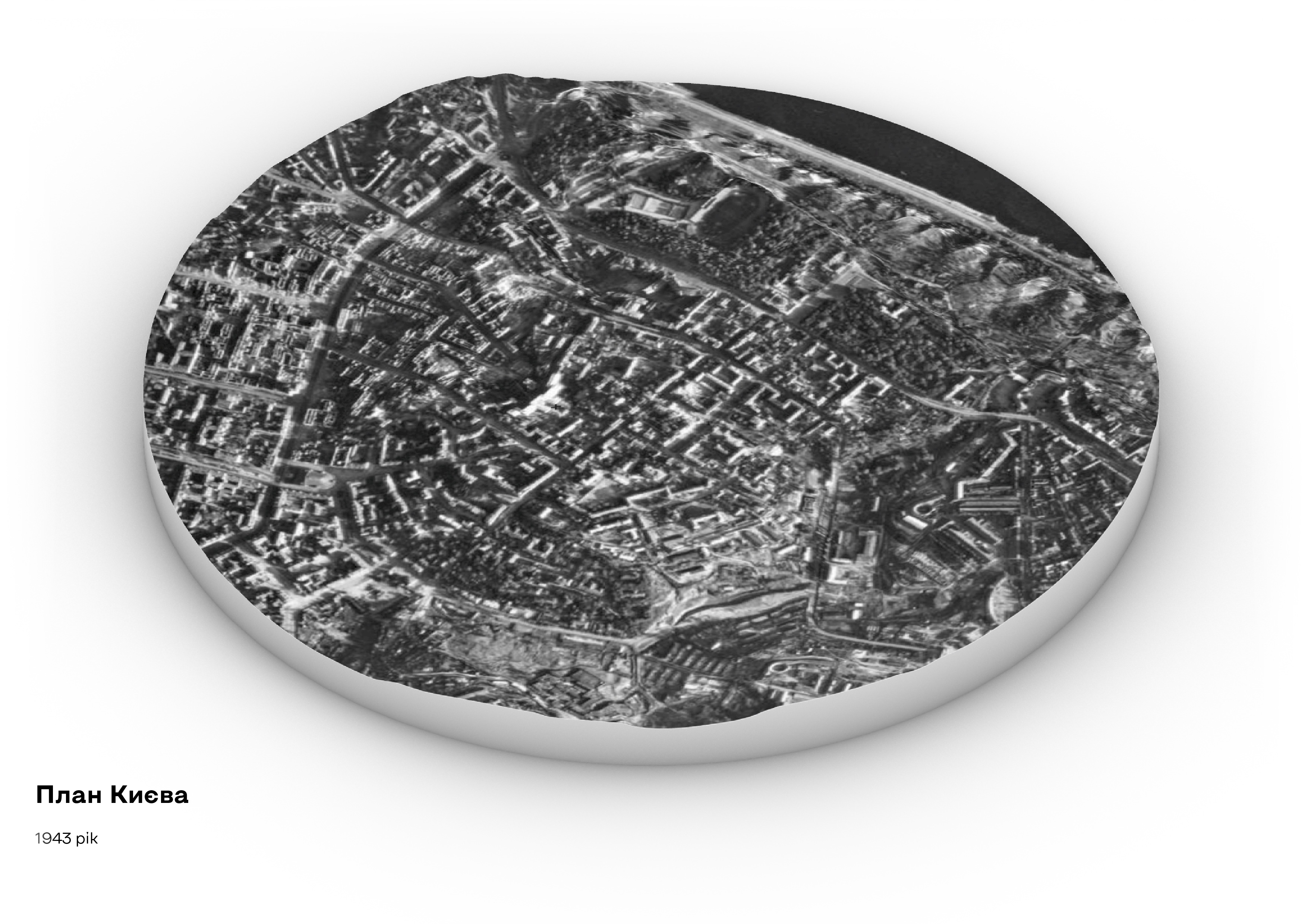 In the end of the 11th century, Lypky was home to a Klovskyi Monastery, which Mongols destroyed in 1240 in addition to most of the city. Until the 18th century, wild Tilia and mulberry tree groves covered Lypky, and monks of Kyiv-Pechersk Lavra cultivated vineyards there.

As part of the city’s expansion, wild Tilia groves in what is now Lypska street were cut down in 1828, while Mulberry tree groves and vineyards were cut down in 1835. In 1861, a general plan for Kyiv was approved: according to this document, only building permits for two-storied houses made of stone were granted and taller buildings were granted construction only since 1909.

In 1934, the capital of the USSR was moved from Kharkiv to Kyiv. During that period, a government centre was formed in the north part of Lypky comprised of a series of estates and administrative buildings for the People's Commissariat for Internal Affairs (more widely known as NKVD by its abbreviation in Russian) and the Apparatchiks Communist Party.

During World War II, a portion of Lypky was demolished by bombs. The district was rebuilt following the war, which brought about significant changes most notable in Khreshchatyk, which now serves as a main street venue for public events. Since then, Lypky has almost not evolved in terms of neither land use nor build environment. 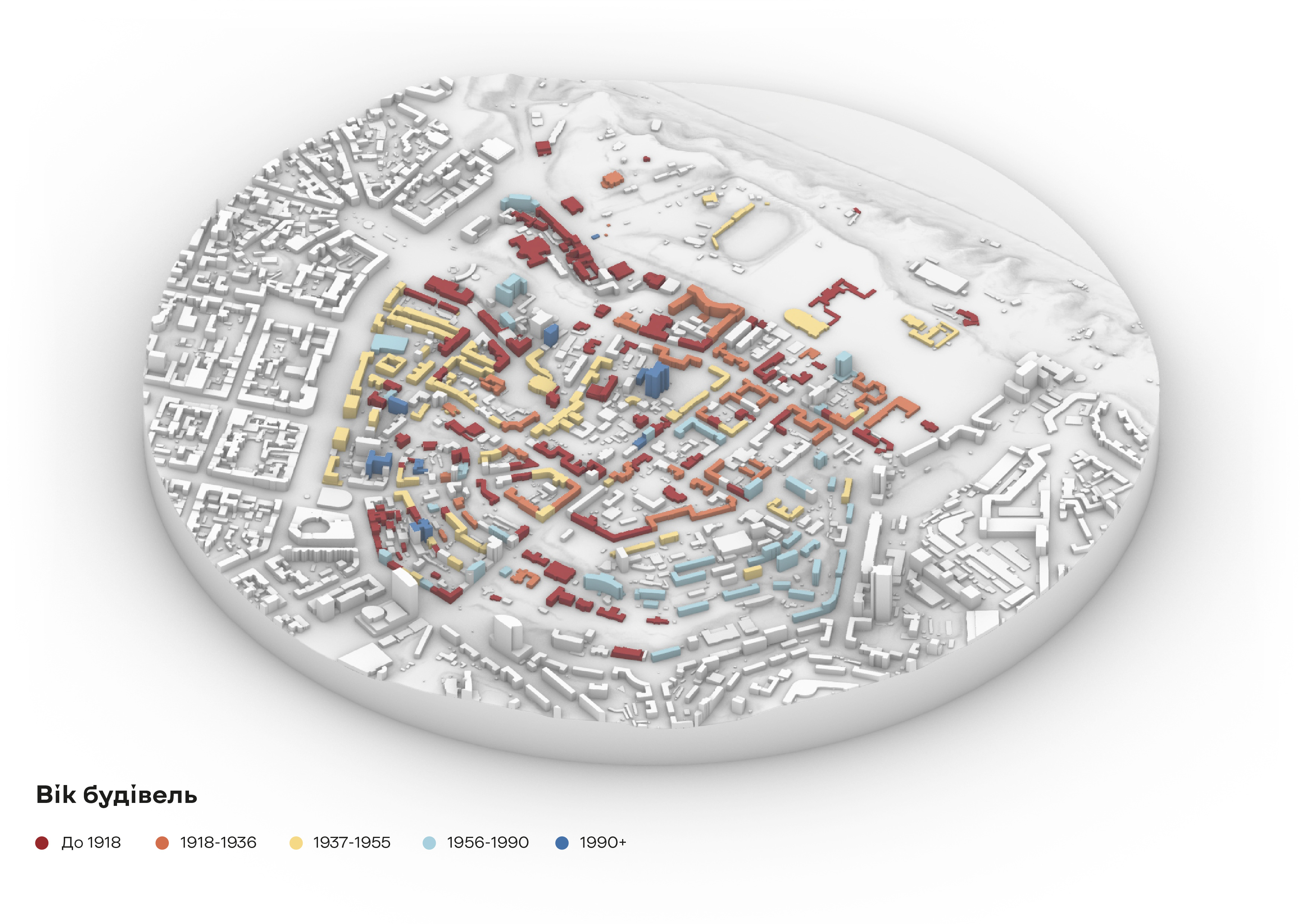 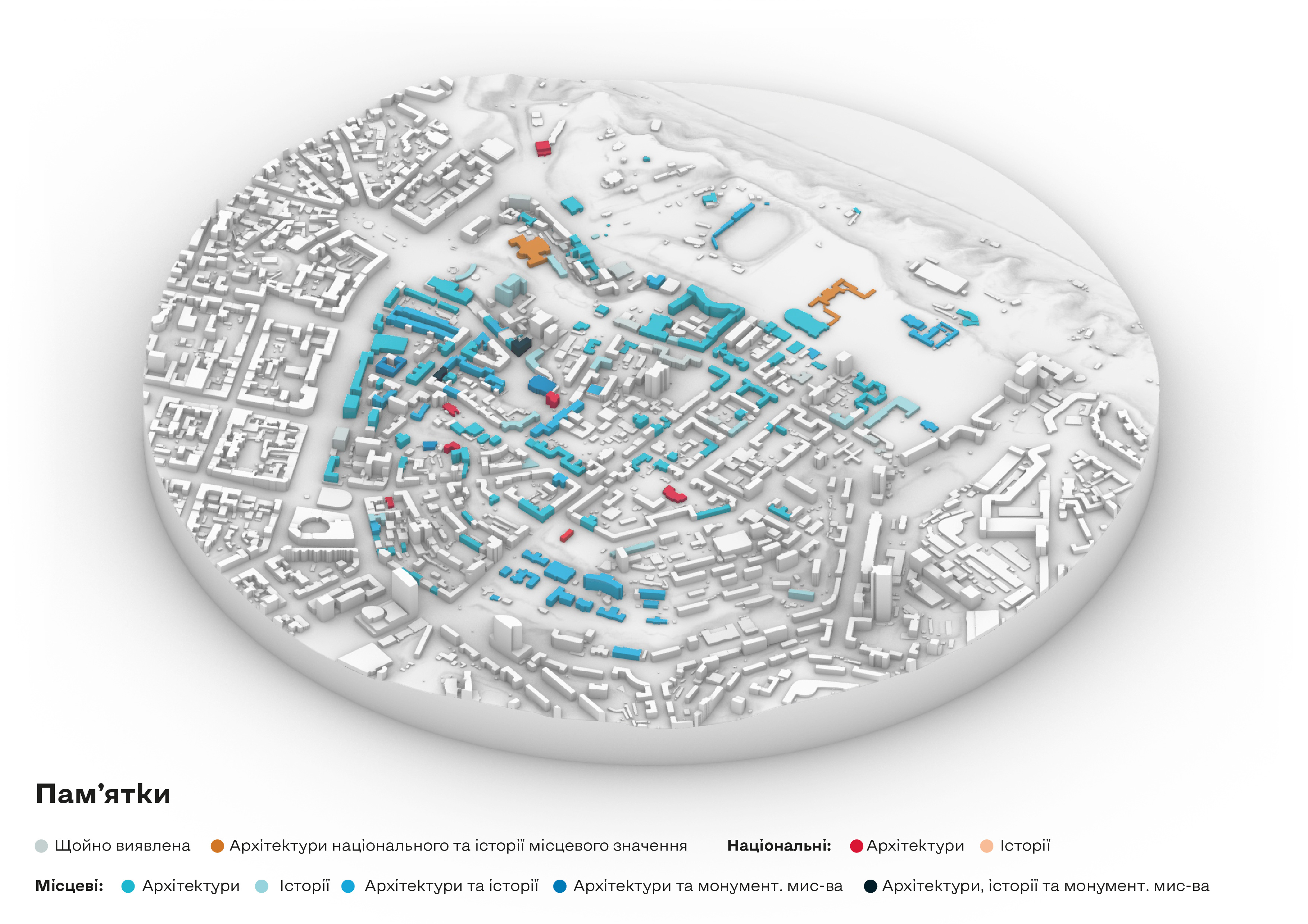 Monuments and age of buildings

Most current buildings in Lypky were built until the middle of the 20th century. Later, only minor additions were made to already formed blocks. One exception are the developments of 1960-80s East of the Alexander Clinical Hospital on the slopes of Mechnykova street. The latter was the last addition to the current face of Lypky, which has evolved very little through the years of Ukraine’s independence.

Here we can see many preserved buildings of architectural or historical importance. The majority of those can be found between the Khreshchatyk and Lypska streets. The area also has a few architectural monuments of national significance, with the House of Horodentskyi on Bankova street, among others. 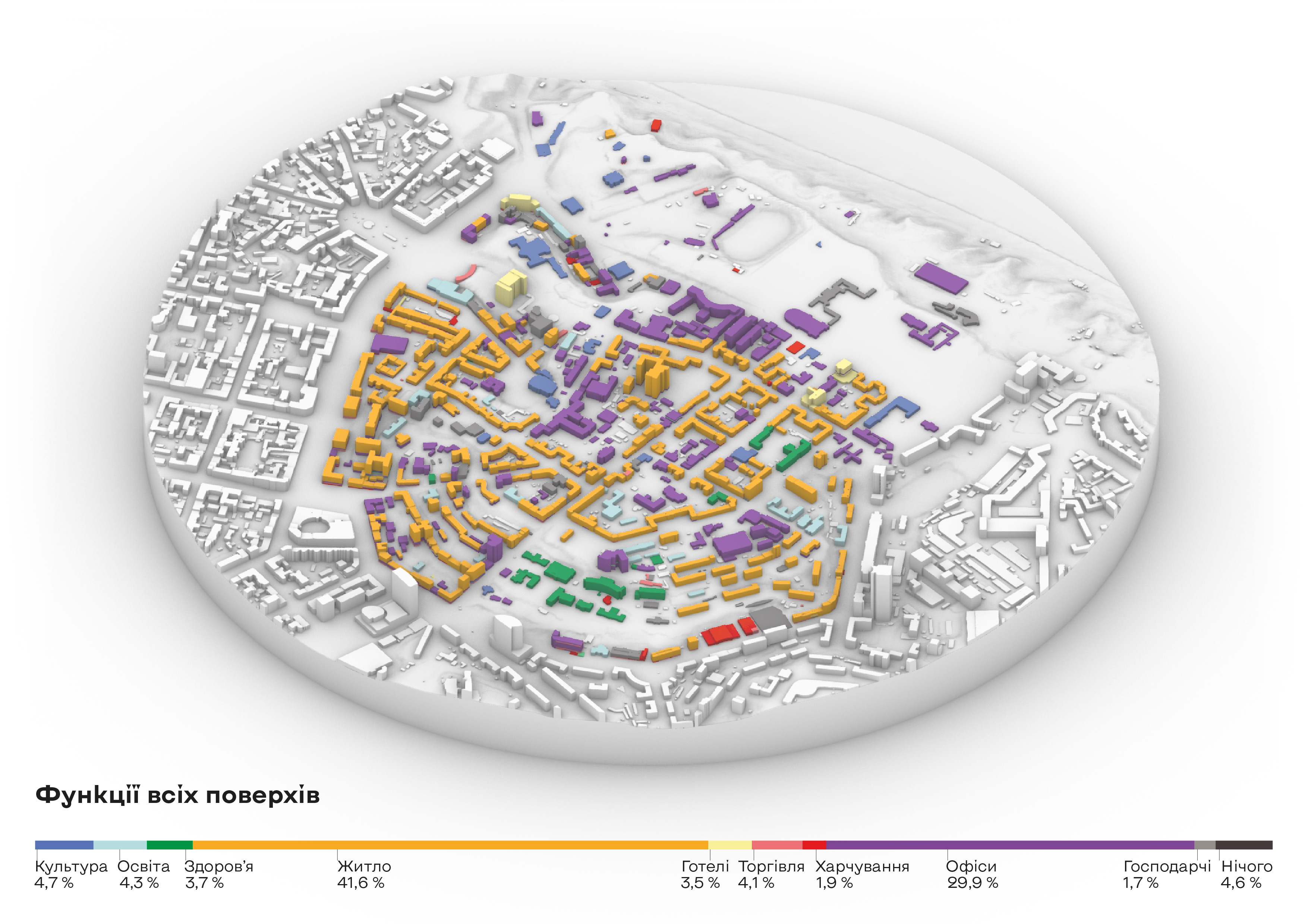 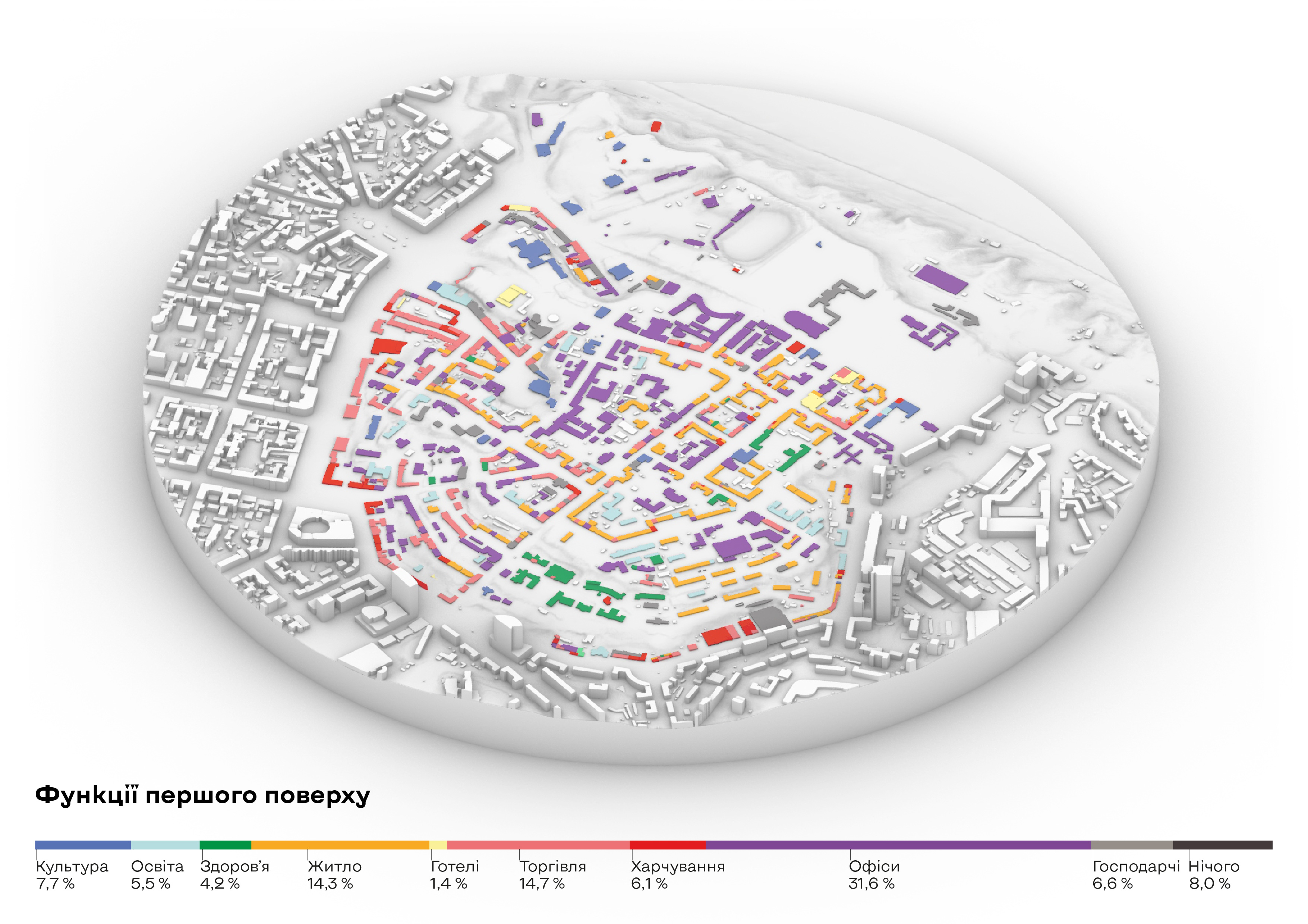 While residential buildings prevail in Lypky, office buildings still occupy one third of its total square metre area. Approximate numbers show that the neighborhood is home for 35,000 residents and an workplace for 64,000 workers. Offices here are concentrated in the centre part of the neighbourhood, which severely limits possibilities for public realm use. These few blocks do not form part of the daily routine of the residents; instead, everyday life is concentrated across the perimeter. The quarter of Alexander Clinical Hospital on the slopes of Mechnikova street stands aside from this pattern.

Ground floors of the neighborhood are dominated by offices, which occupy more than one third of all ground floor spaces. Active ground floors with retail and dining facilities are concentrated in Khrashchatyk and Mechnykova, partly going deeper up on Horodetskoho street and Ivana Franka square. The Eastern part of Shovkovychna street contains primarily residential ground floors, bringing a slightly quieter and calmer feel to this neighbourhood compared to other parts of Lypky. 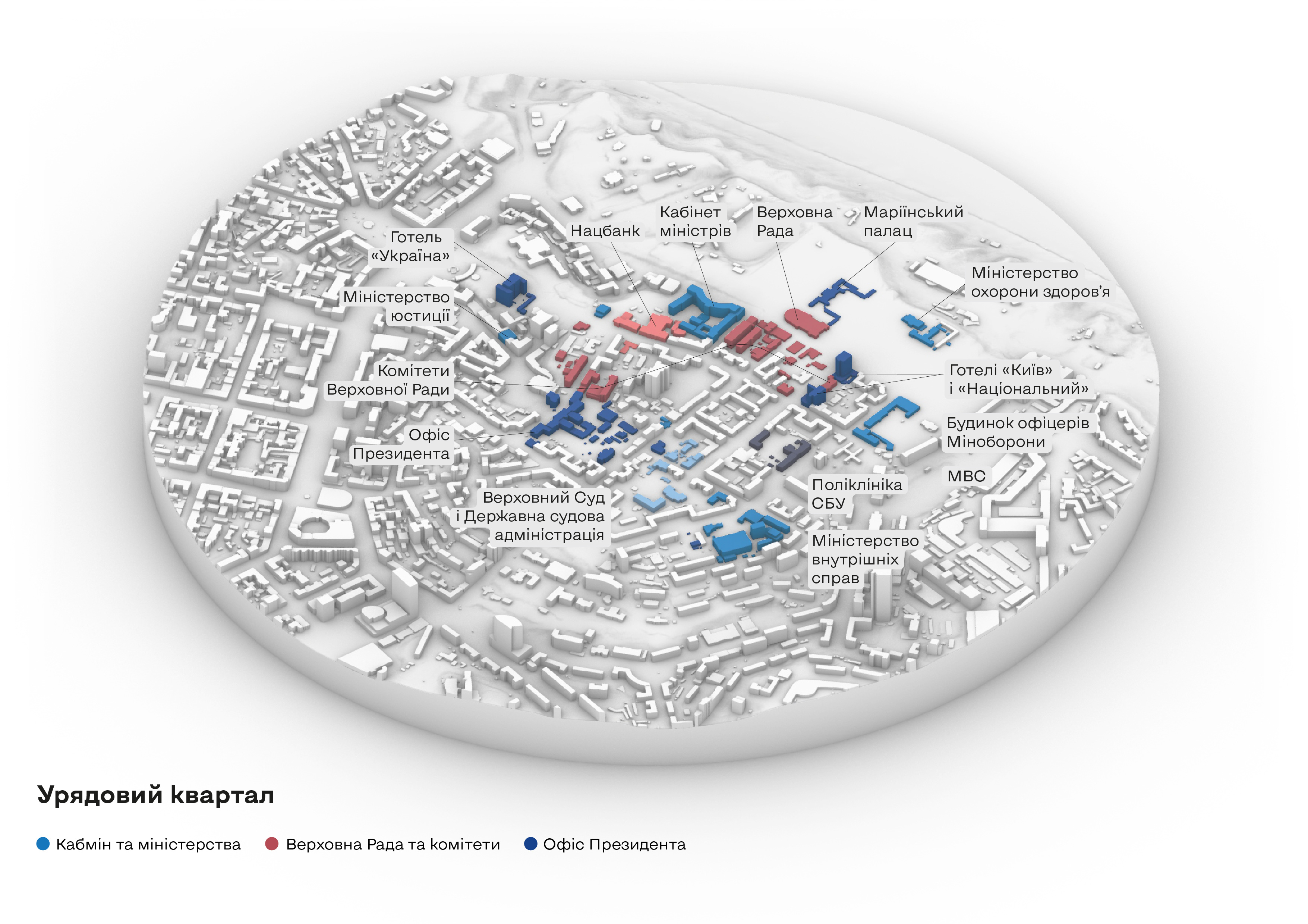 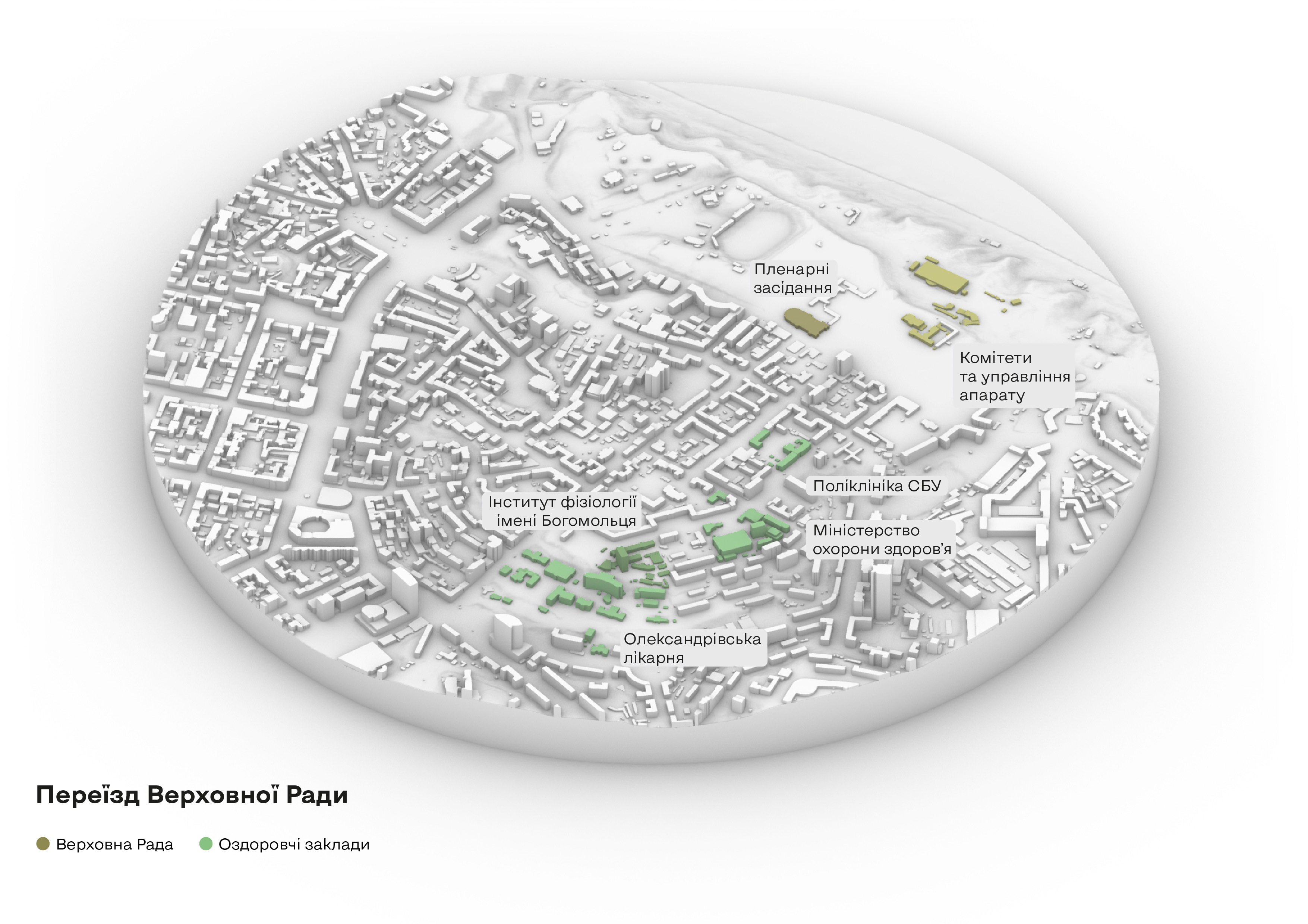 Buildings of the Cabinet of Ministers and ministries, Verkhovna Rada, The Office of the President, courts and National Security Service are mainly concentrated in the central part of Lypky. The concentration peaks take place along Hrushevskogo street. Most of these institutions have enclosed quarters that block the free flow of pedestrians. This flow worsens on the days of protests, rallies and other political events, which then block streets for vehicles on the periphery. Users of this area also point out an excessive level of tension and stress, which they attribute primarily to the excessive numbers of police forces in Lypky both on the days of events as well as during calmer days. 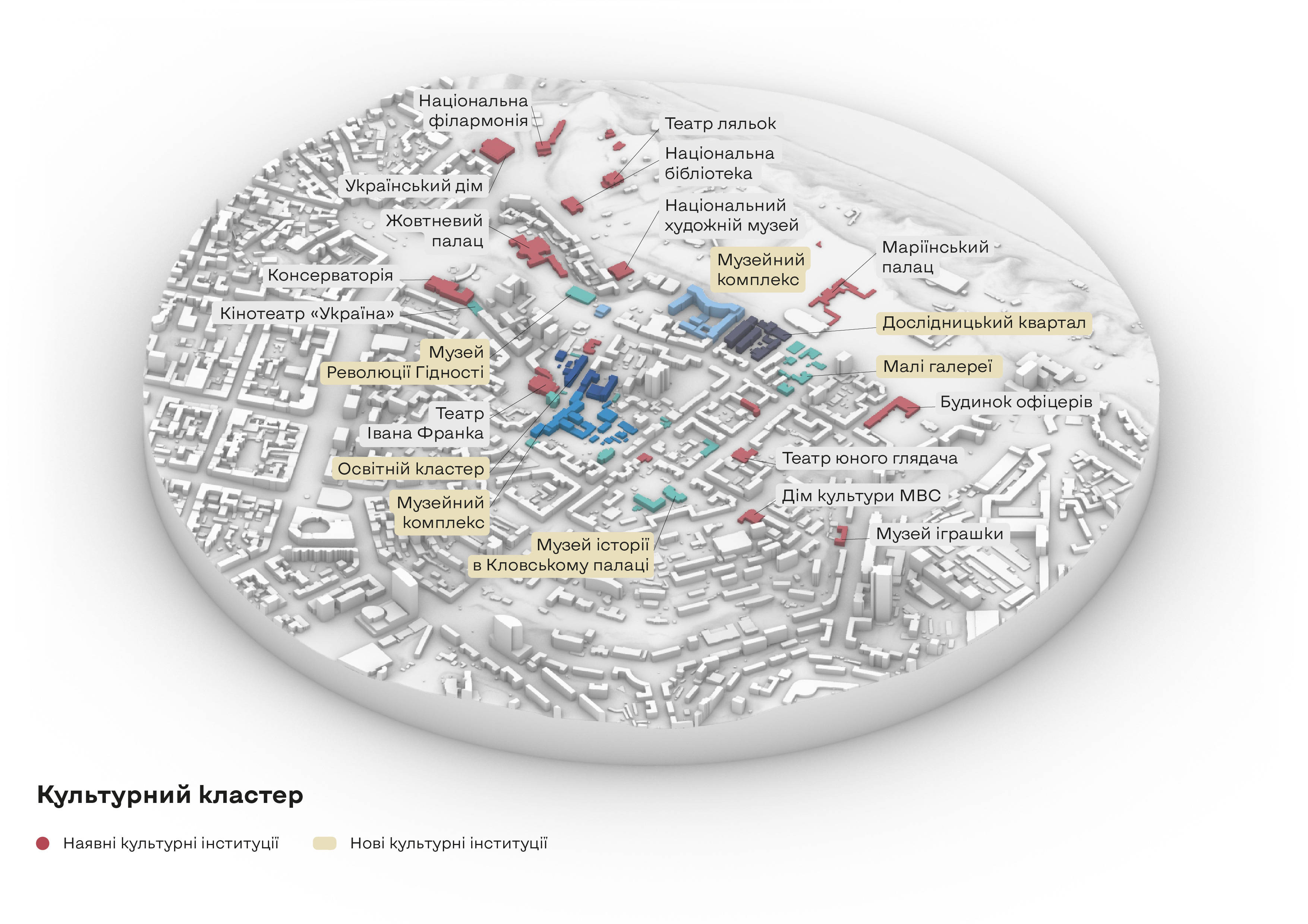 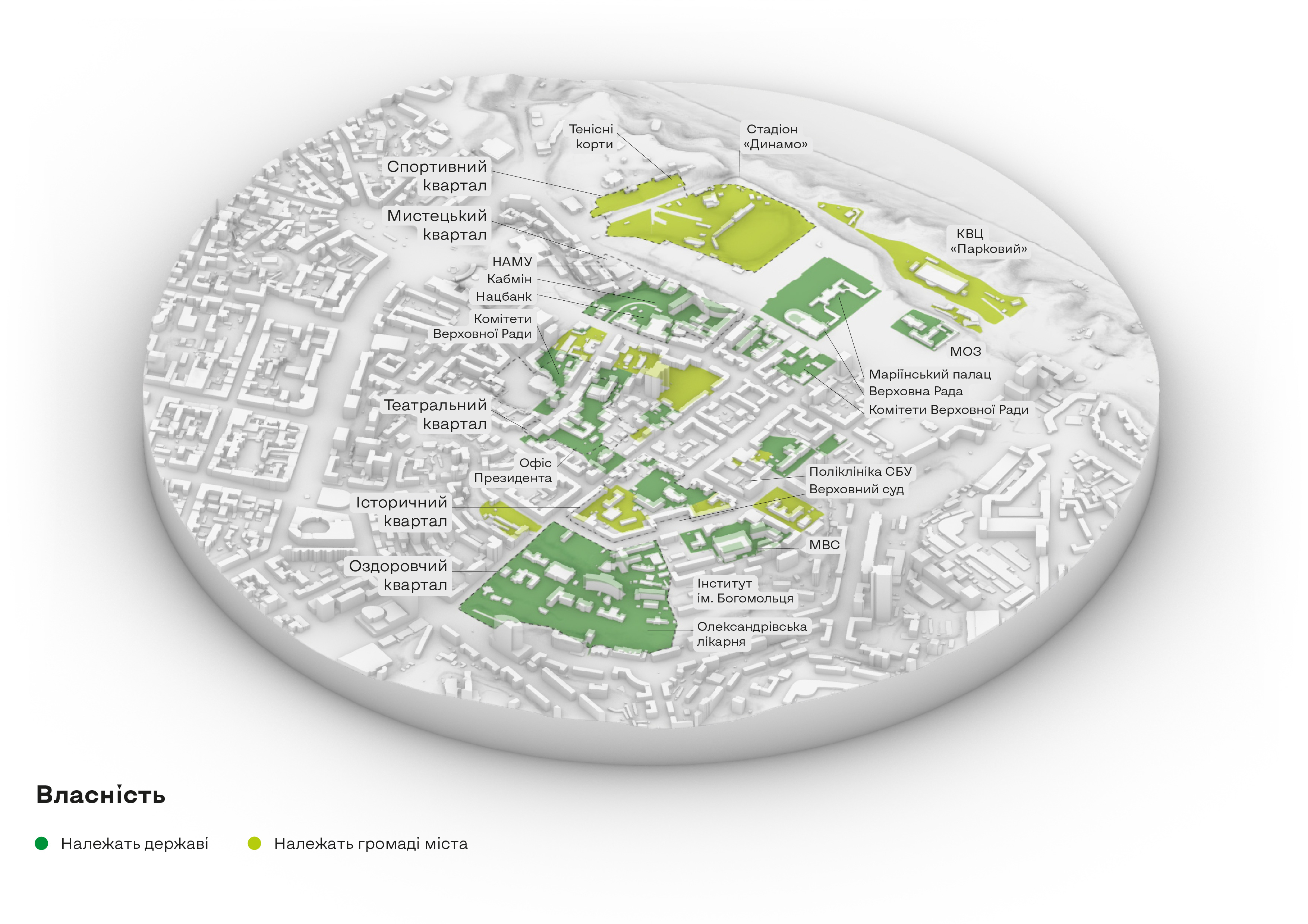 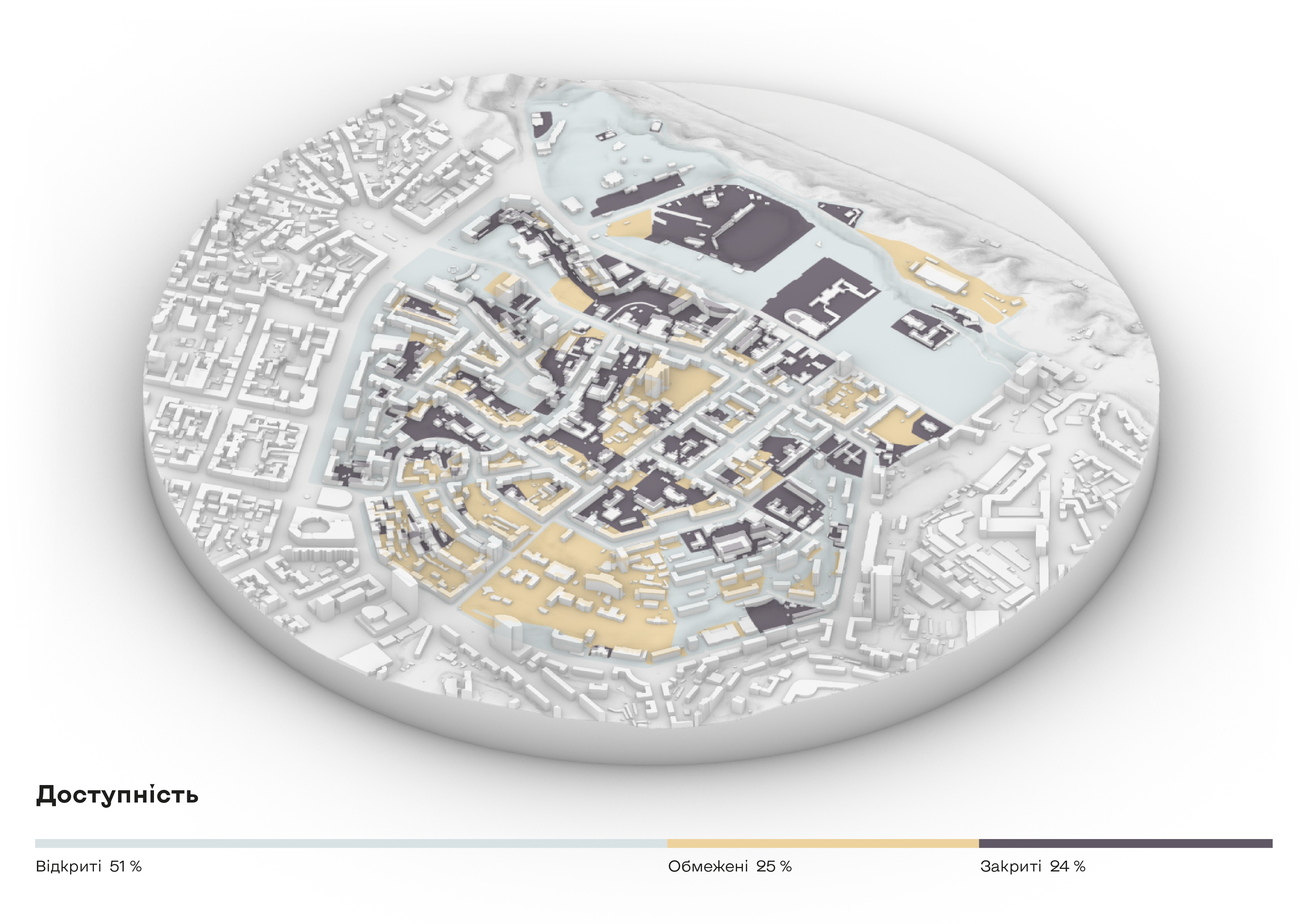 The vision is for citizens to inhabit the vacated buildings with cultural and creative heritage centered around arts, events, exhibitions, research and education. New institutions would be modeled on present cultural institutions, such as the Franko Theatre. Closed areas of government quarters would be open and connected to current public spaces, thus creating new points around which citizens could gravitate.

We are also planning to bring back the Museum of Kyiv History to the Klovskyi Palace. In addition, the archaeological museum would be erected in the territory of the historical Klovskiy Monastery, more specifically within the triangle of the Pylypa Orlyka, Bohomoltsya and Shovkovychna streets. In this area, the Historical quarter would be formed. We would fill the Office of the President’s quarters with educational and museum spaces. The Office of President’s quarters, bordering Franko Theatre, would form the Theatrical quarter. 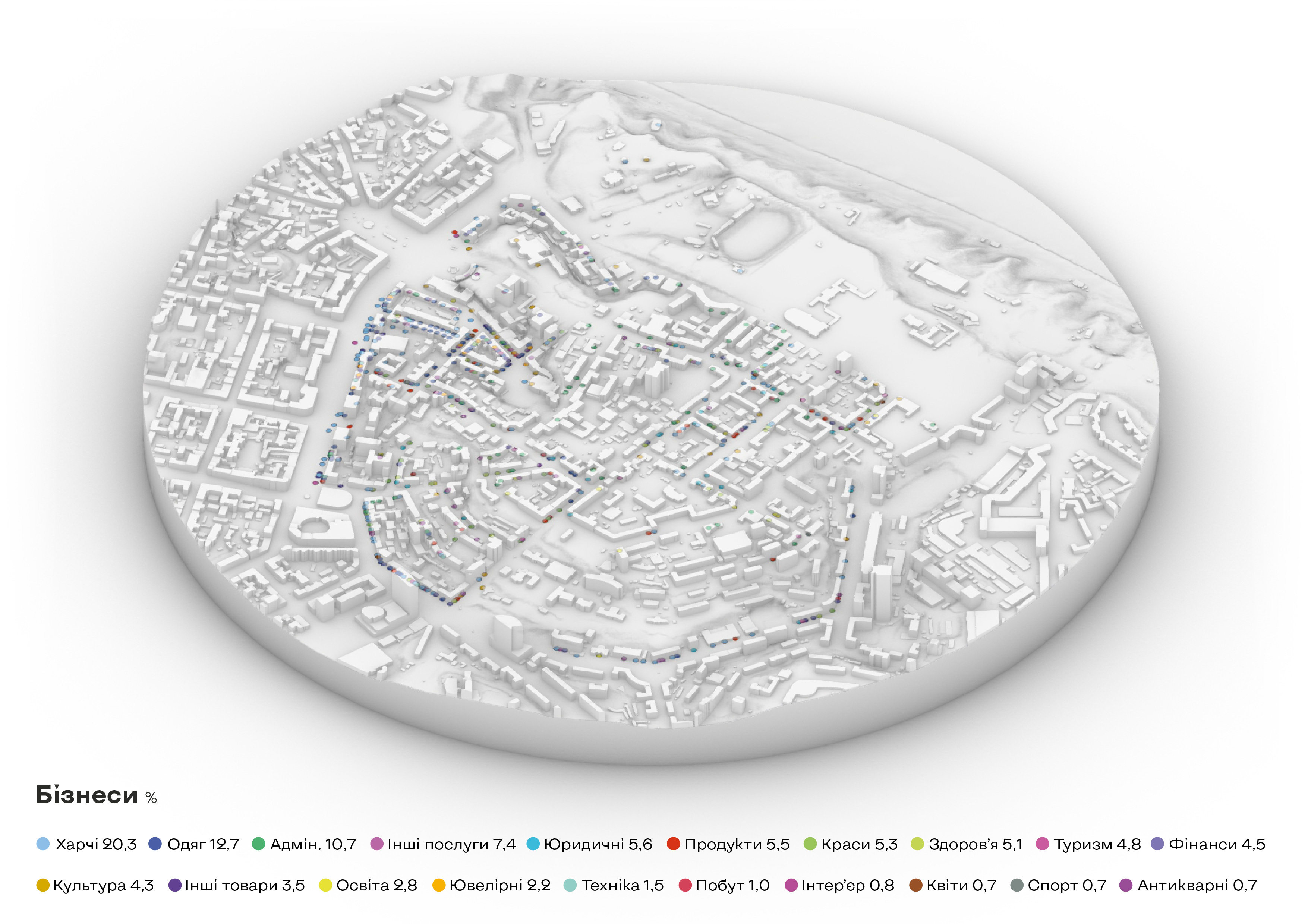 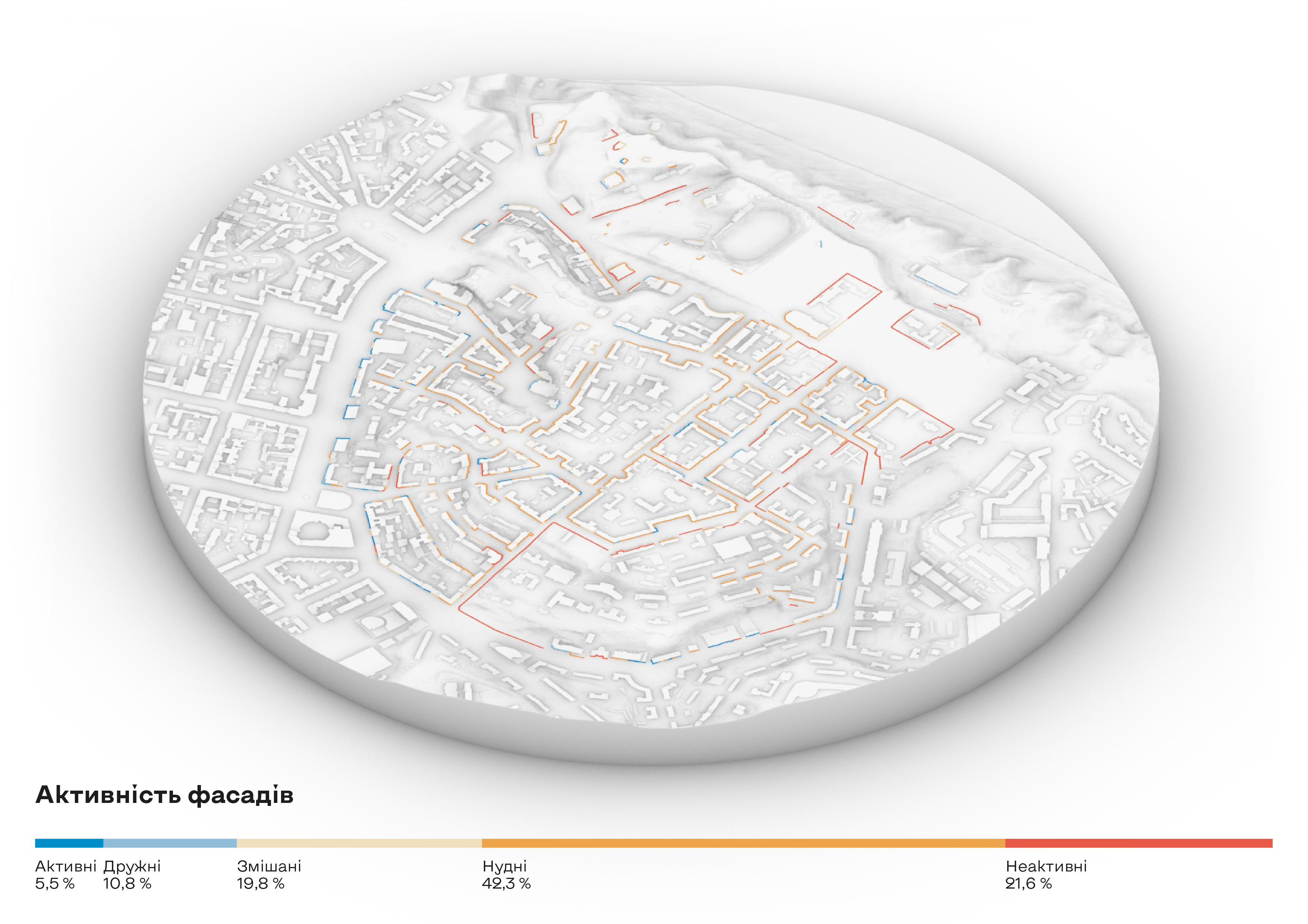 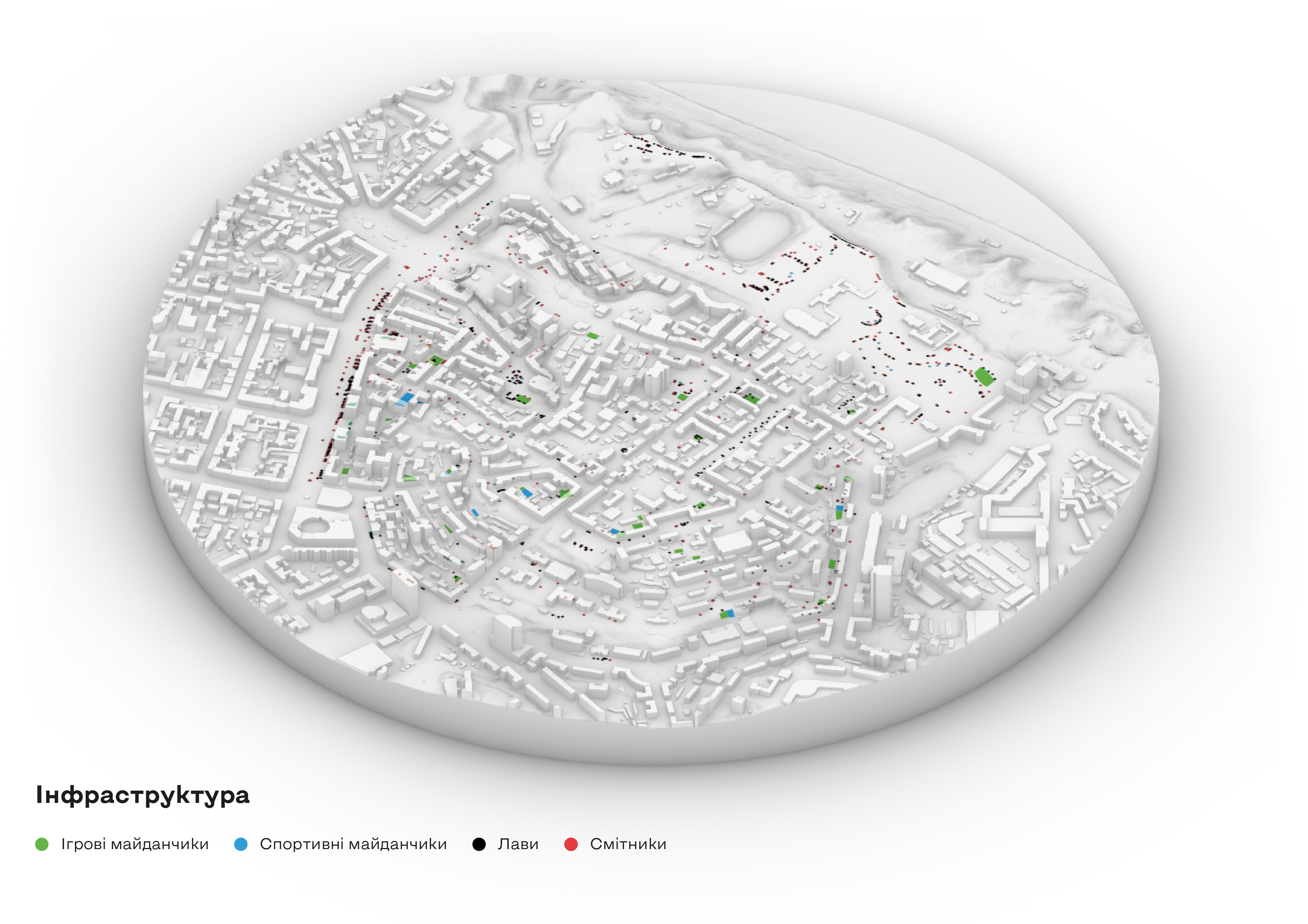 The active public space on Lypky is mainly concentrated along the Khreschatyk, Basseyna, and around Franka Squares. Here we find the highest concentration of ground floor businesses and active storefronts. In the administrative and residential areas in the Eastern part of the neighborhood, you can hardly find ground floow businesses and active storefronts. These are instead across the Shovkovychna, Instytutska and Hrushevskoho streets.

The only unique character of Lypky’s public infrastructure is its garbage bins and benches. Despite this, they can be scarcely found across the city. They are mostly located across Khreshchatyk, in Mariinsky Park and partly in the centre of the neighborhood, on the boulevard of Lypska street, but you can hardly find bins in quarters next to the Verkhovna Rada, while Kruhlouniversytetska and Luteranska streets have no benches. A large majority of the children and sports infrastructure is in poor condition. The number of playgrounds and sports pitches is below national standards. 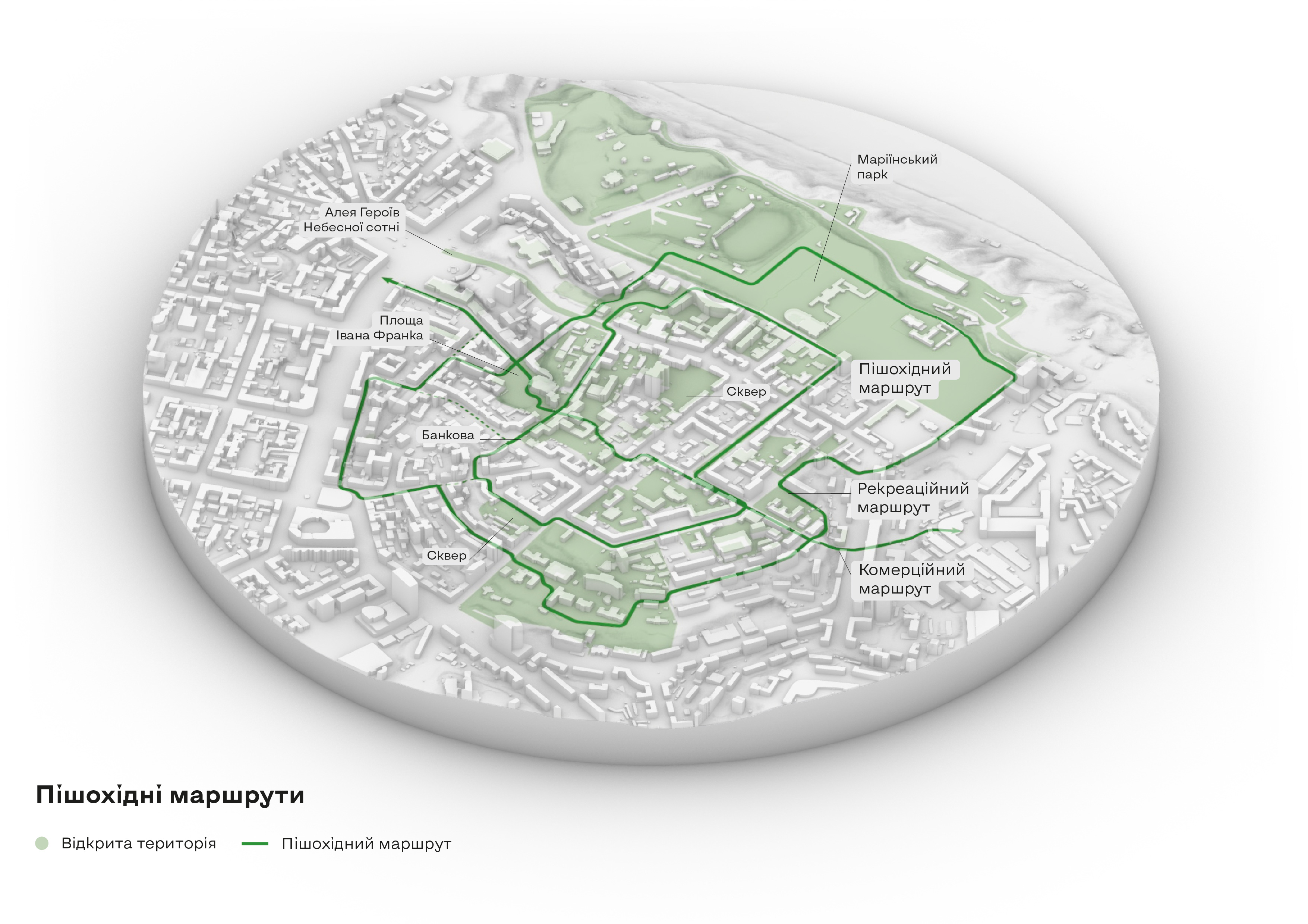 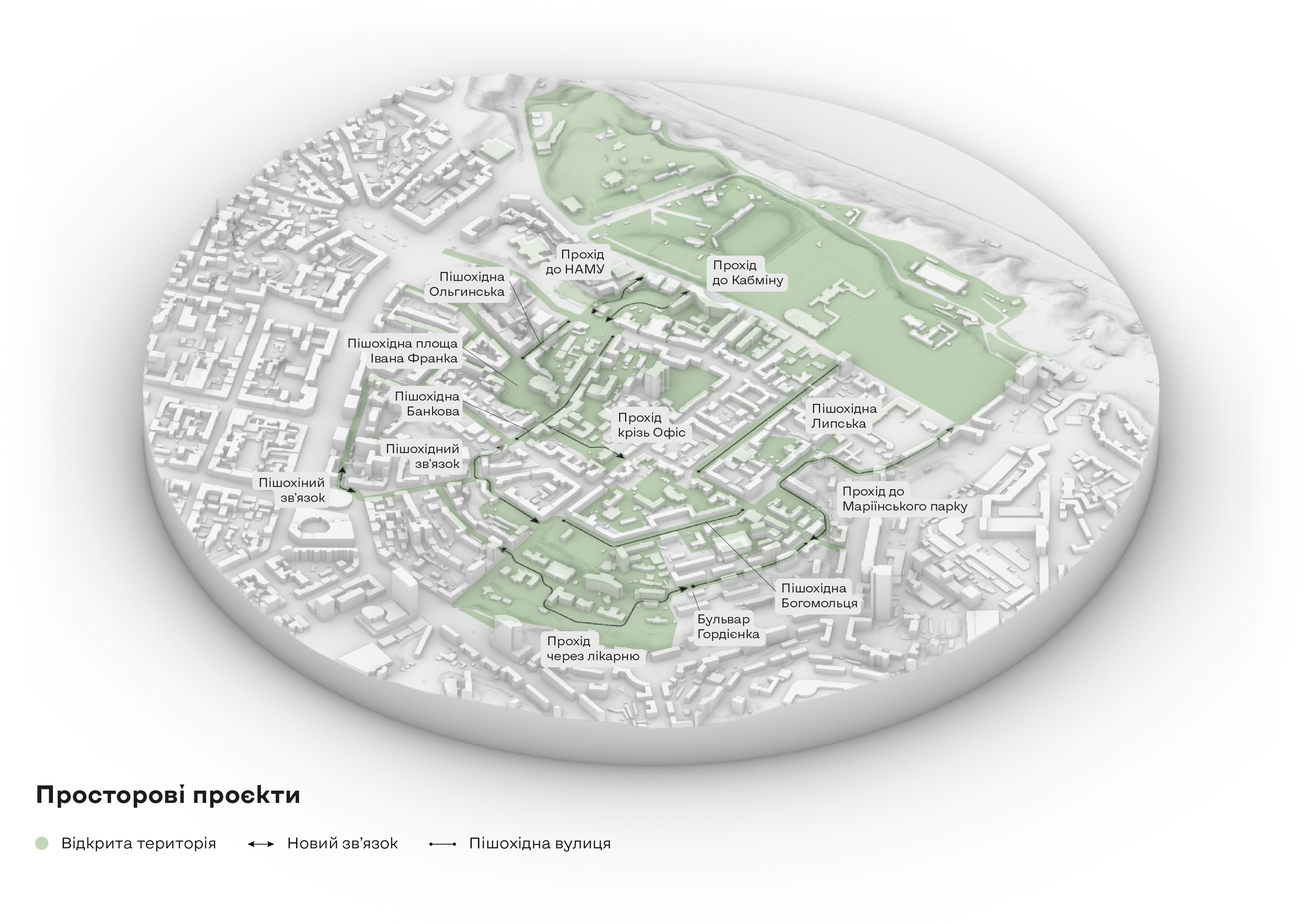 To connect the closed areas of governmental institutions with currently functioning public spaces, we propose to create several new routes. Firstly, a pedestrian route would connect the main pedestrian or already pedestrian-friendly streets; specifically Bankova, Lypska and Bohomoltsya. Secondly, a recreational path would cut through Mariinsky Park, Oleksandrivska hospital area and Franka square. Thirdly, a commercial route would run along the commercial centre of Horodetskoho street up to the Lypky East through the Office of the President.

To comfortably connect those routes, we propose to open pedestrian pathways through Alexander Clinical Hospital as well as the areas of the Office of the President and the Cabinet of Ministers. We would also create main pedestrian routes on the Lypska, Bohomoltsya, Olhynska streets as well as Franka square. That is how we connect Mariinsky Park — the key public space of Lupky — with the rest of the neighbourhood. 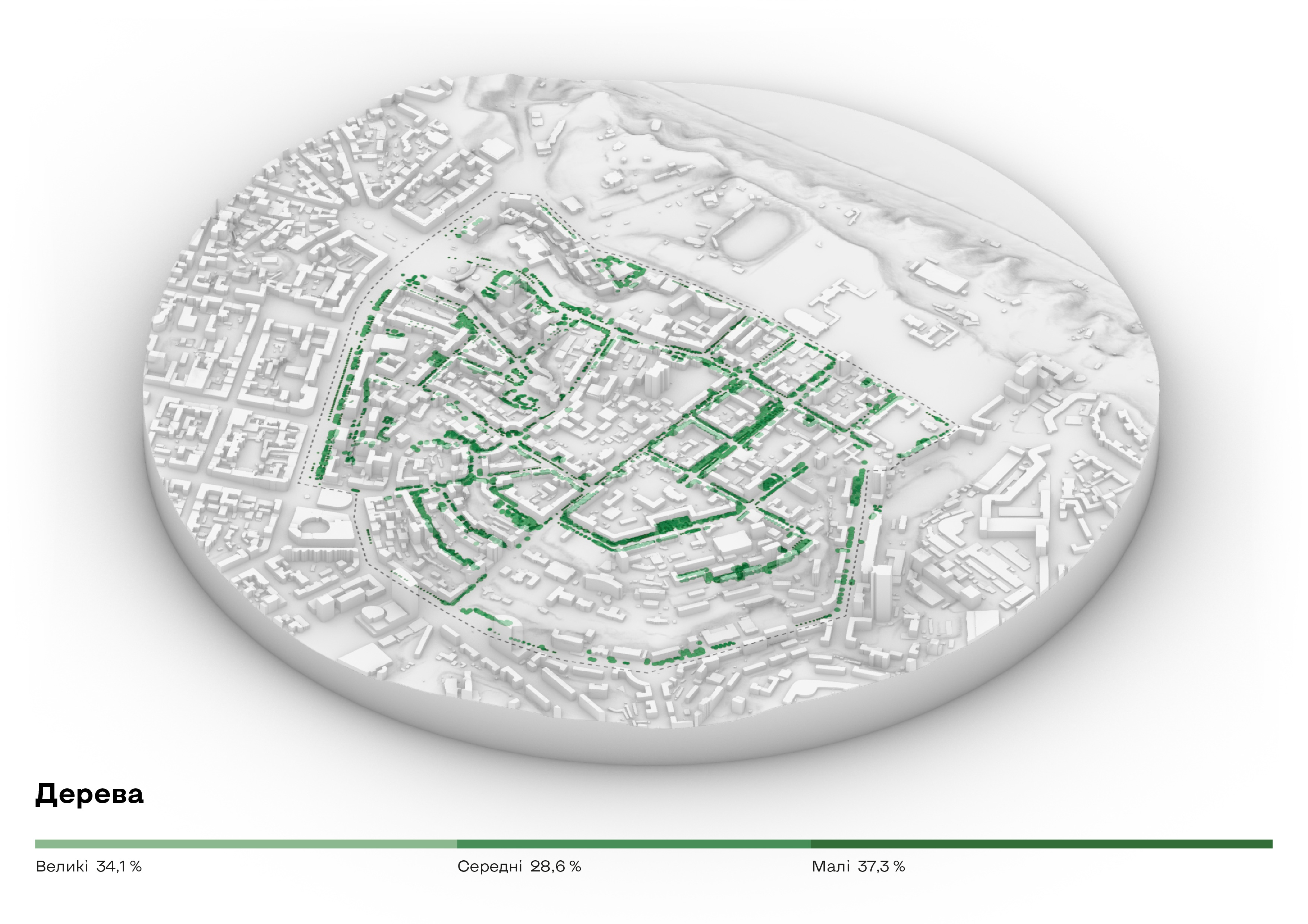 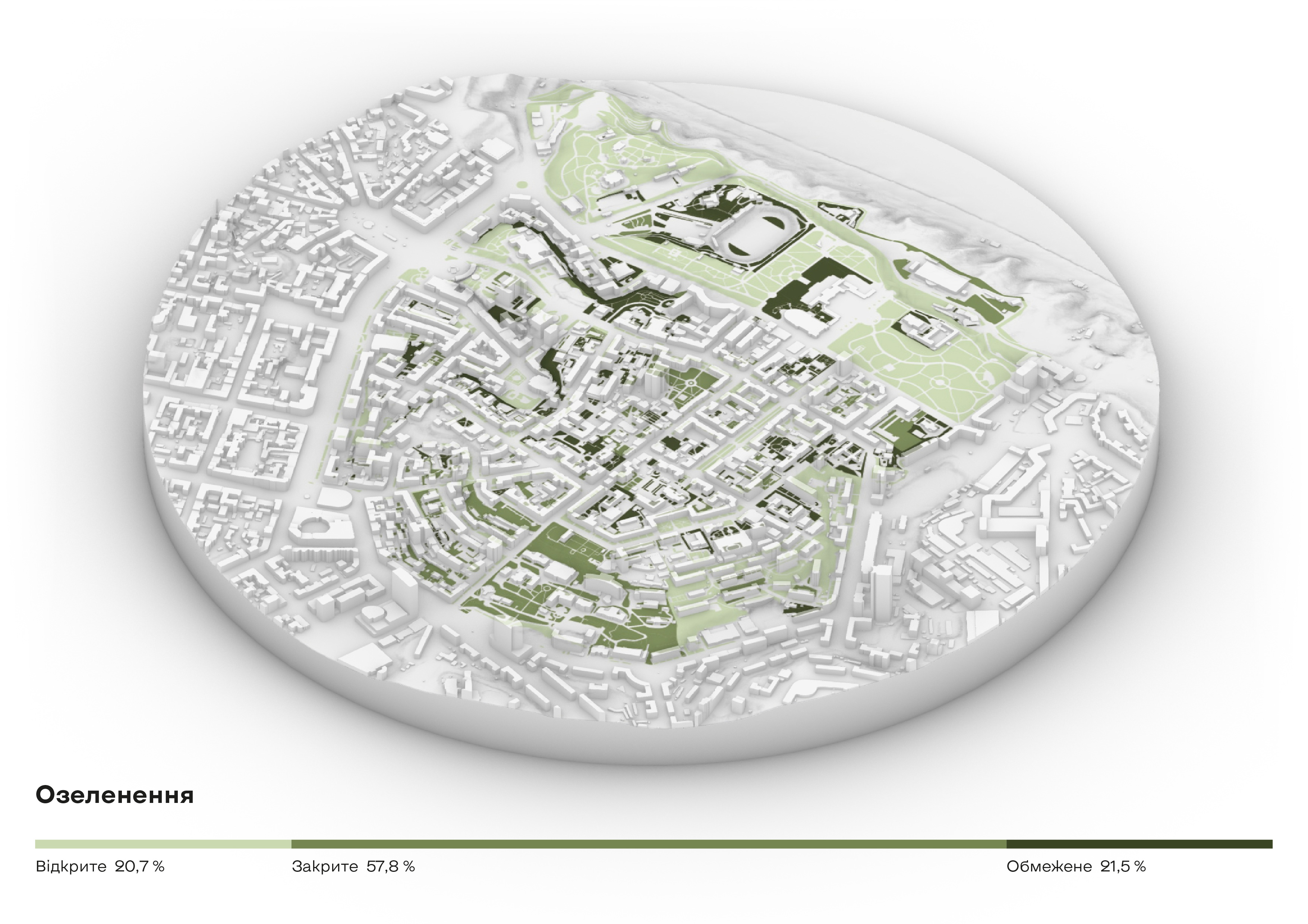 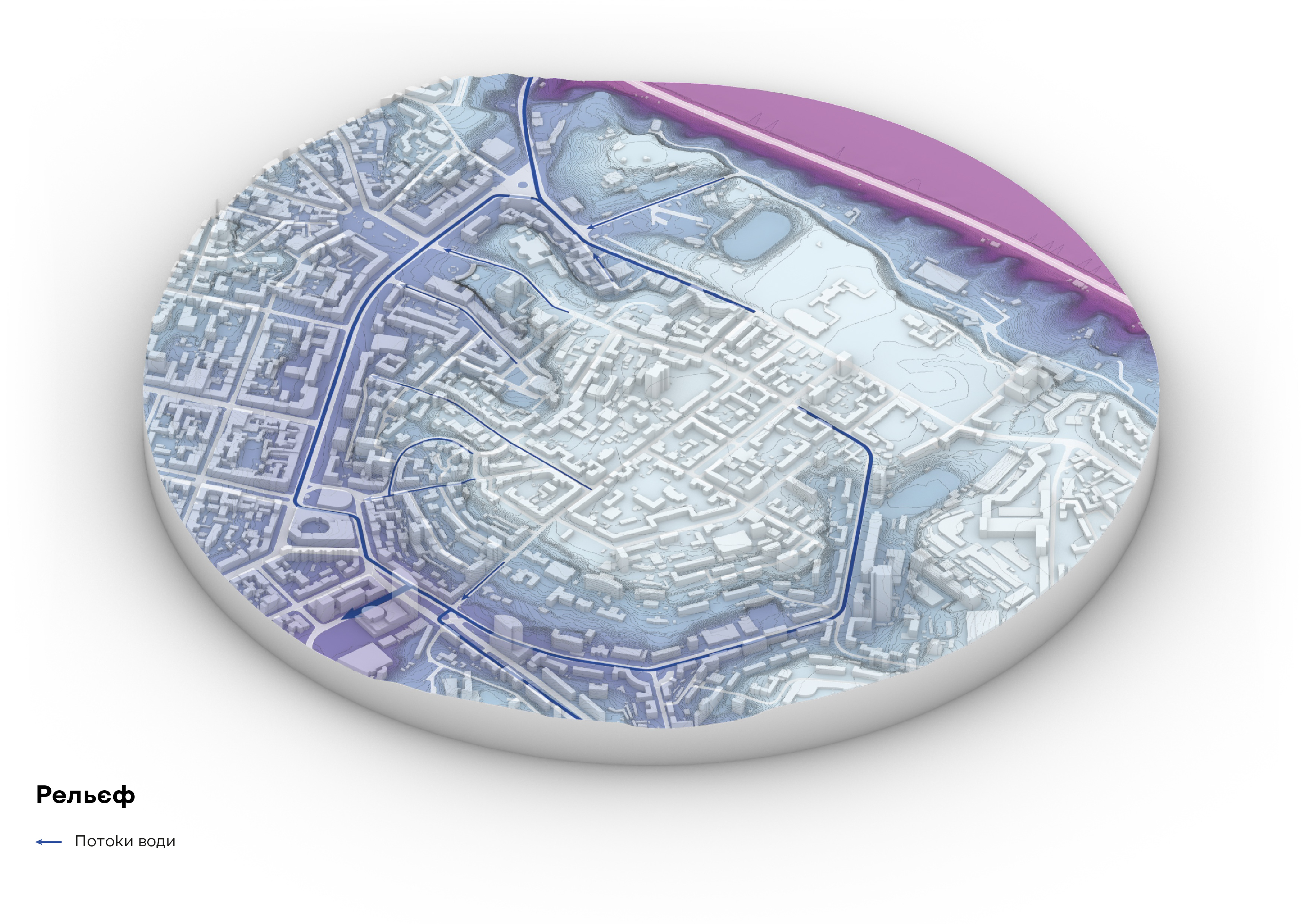 There are several green spaces in Lypsky, Mariinsky Park being the most significant. We can also find Bohomolets park, a portion of Ivana Franka square and the square across provulok Kozlovskoho. Lypska and Bohomoltsya streets are also covered with lush urban greenery. However, these green zones are not connected as green networks, belts or corridors. The perimeter of Lypky, with the highest concentration of pedestrians and vehicles, is sparsely green.

A significant share of urban greenery is confined to either restricted areas or areas closed to the public.

Moreover, the streets have no modern stormwater drainage systems. To connect the separated urban greenery zones, we propose to reintroduce greenery to most pedestrian routes as well as create a green-blue network as a way to effectively deal with stormwater. Available vegetation zones can soak a limited volume of stormwater. That is why a sustainable urban greenery system directs streams of water, filters those and leads water down to the revitalised rivers at the feet of Lypky hill. 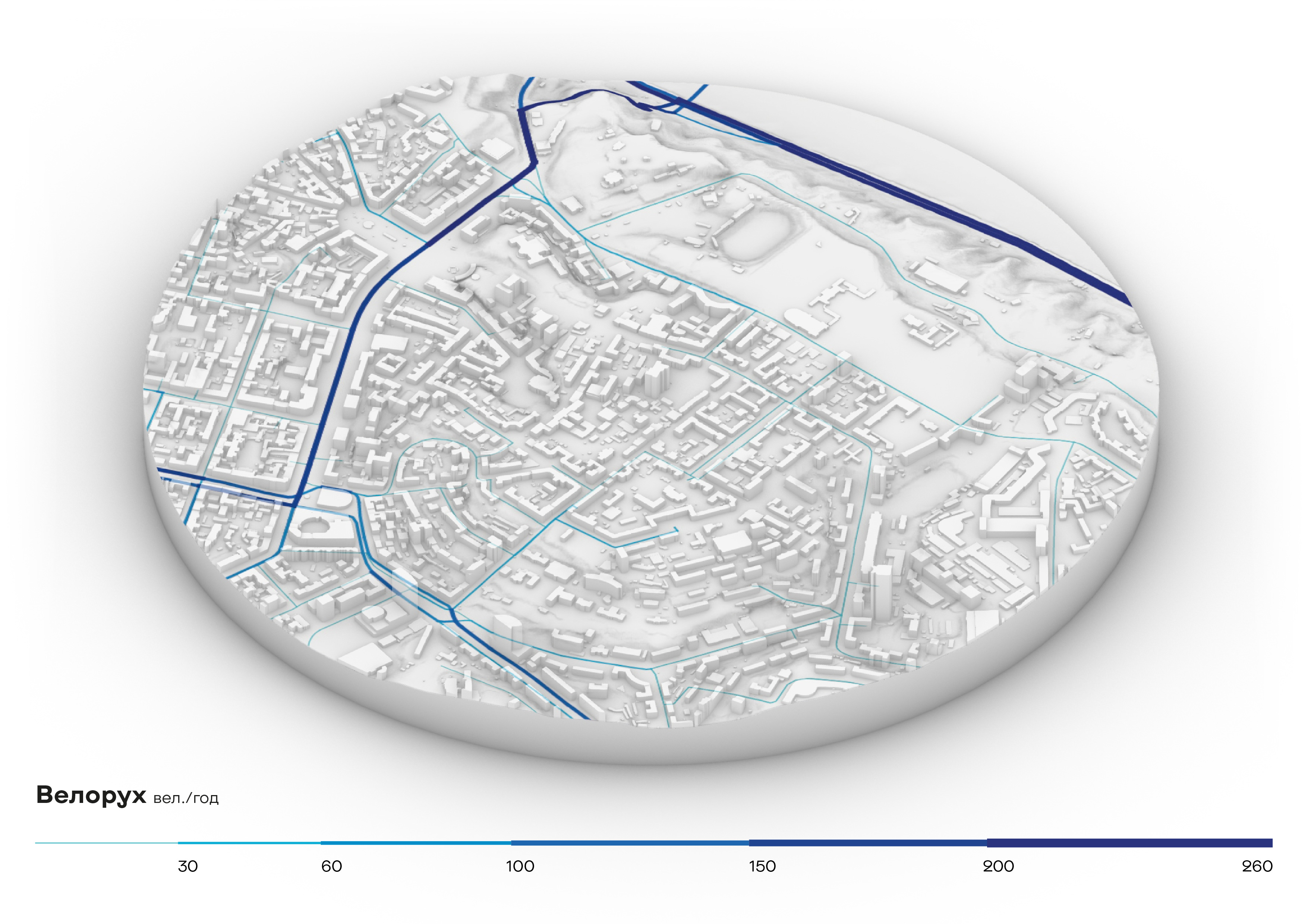 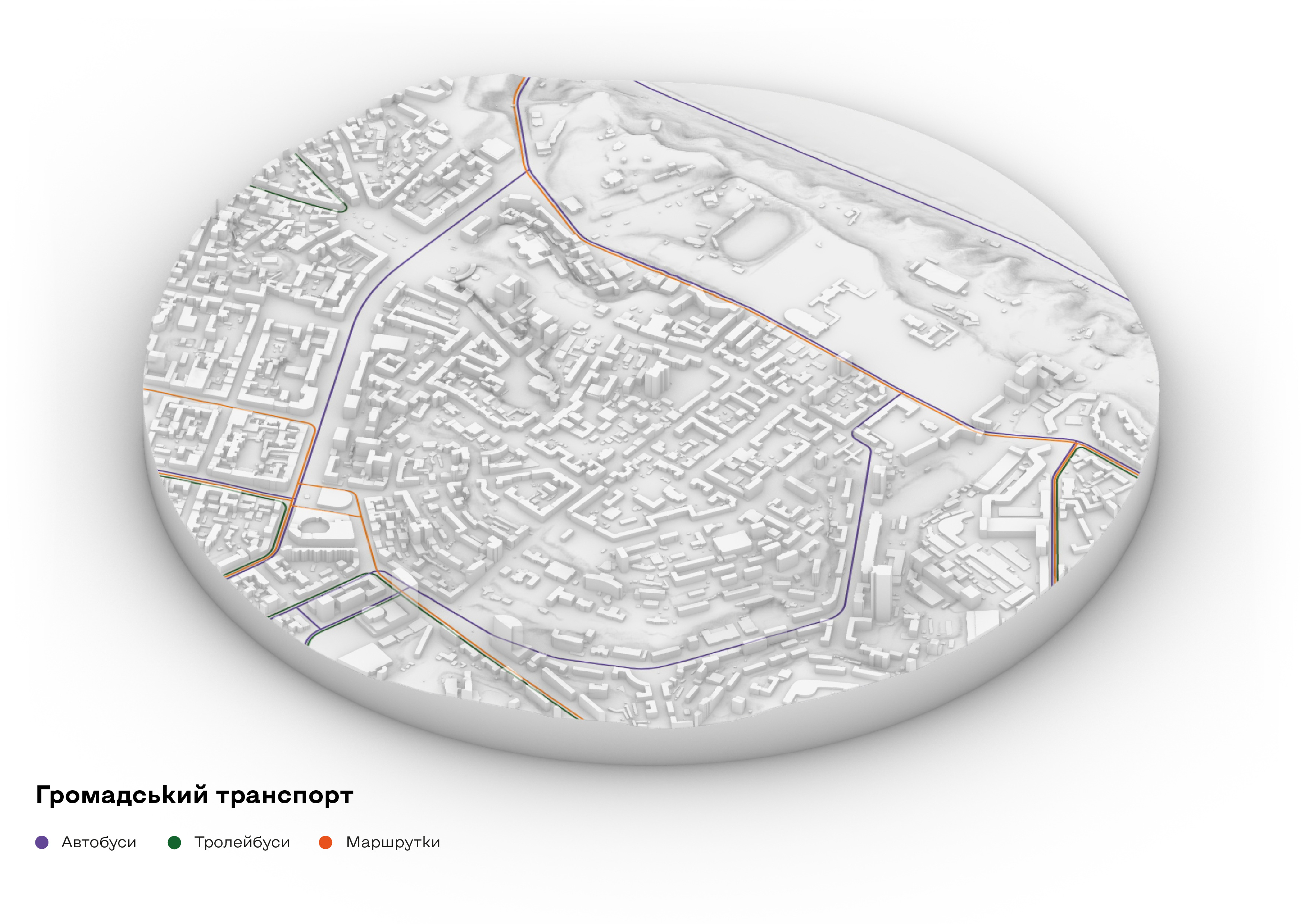 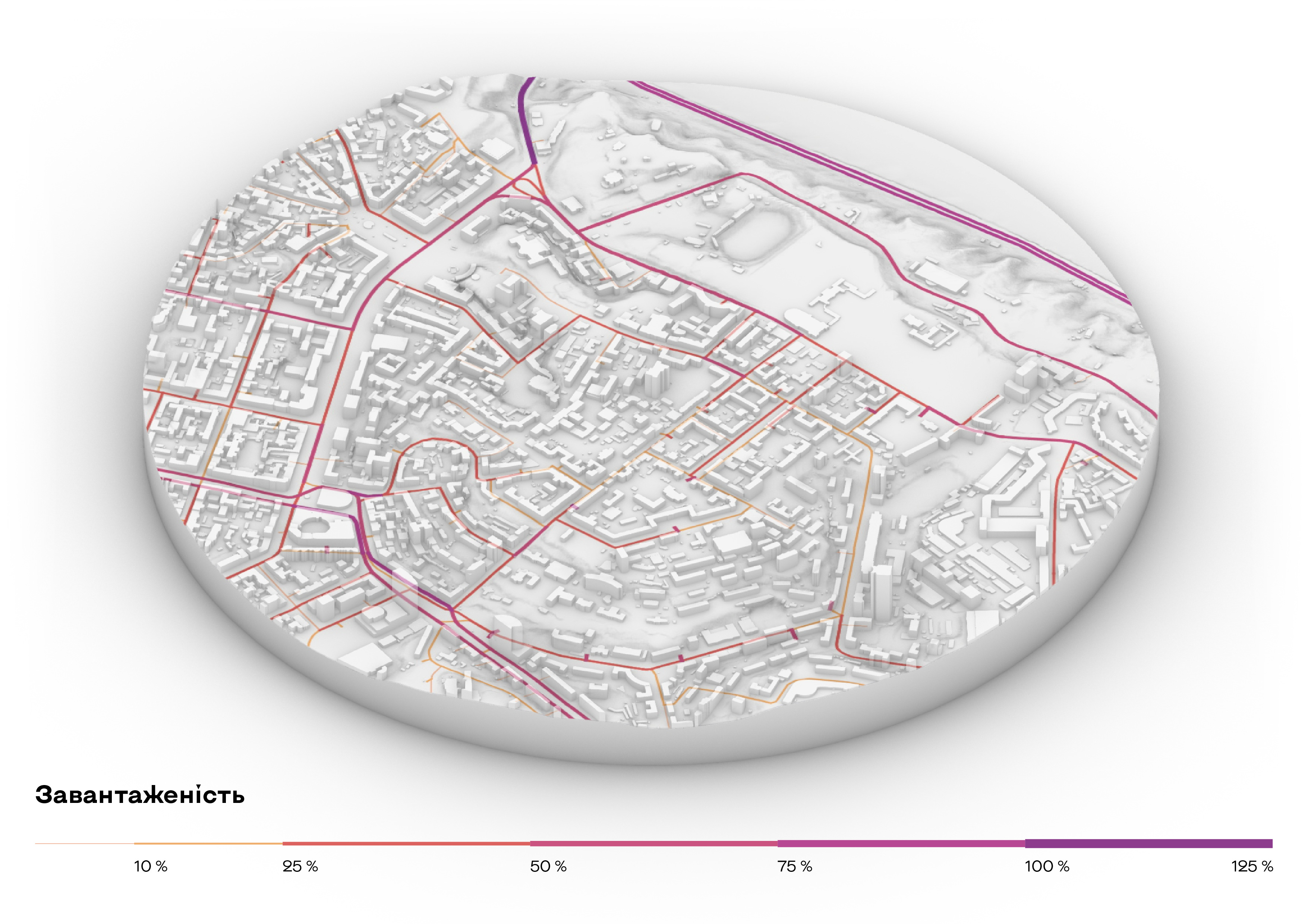 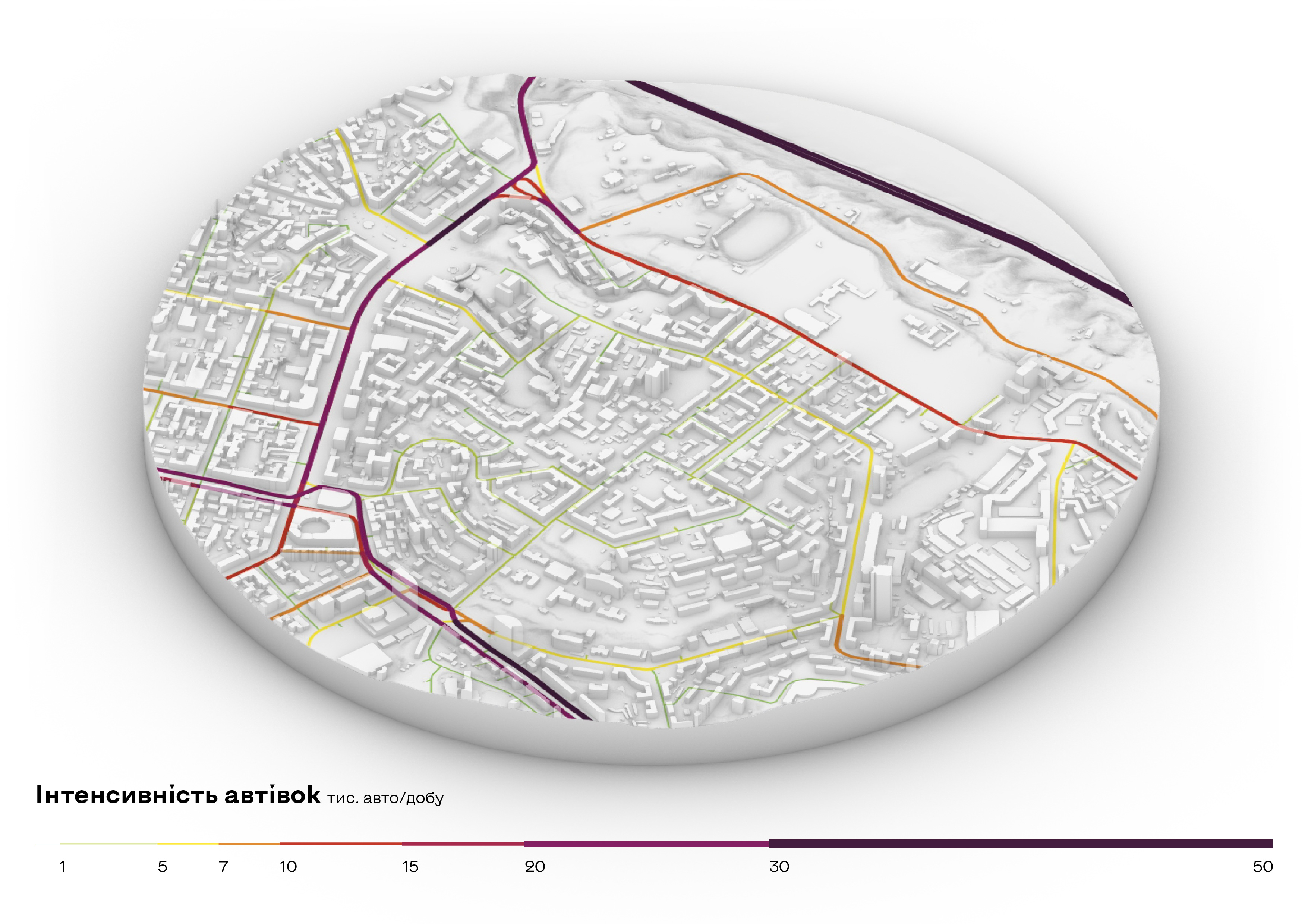 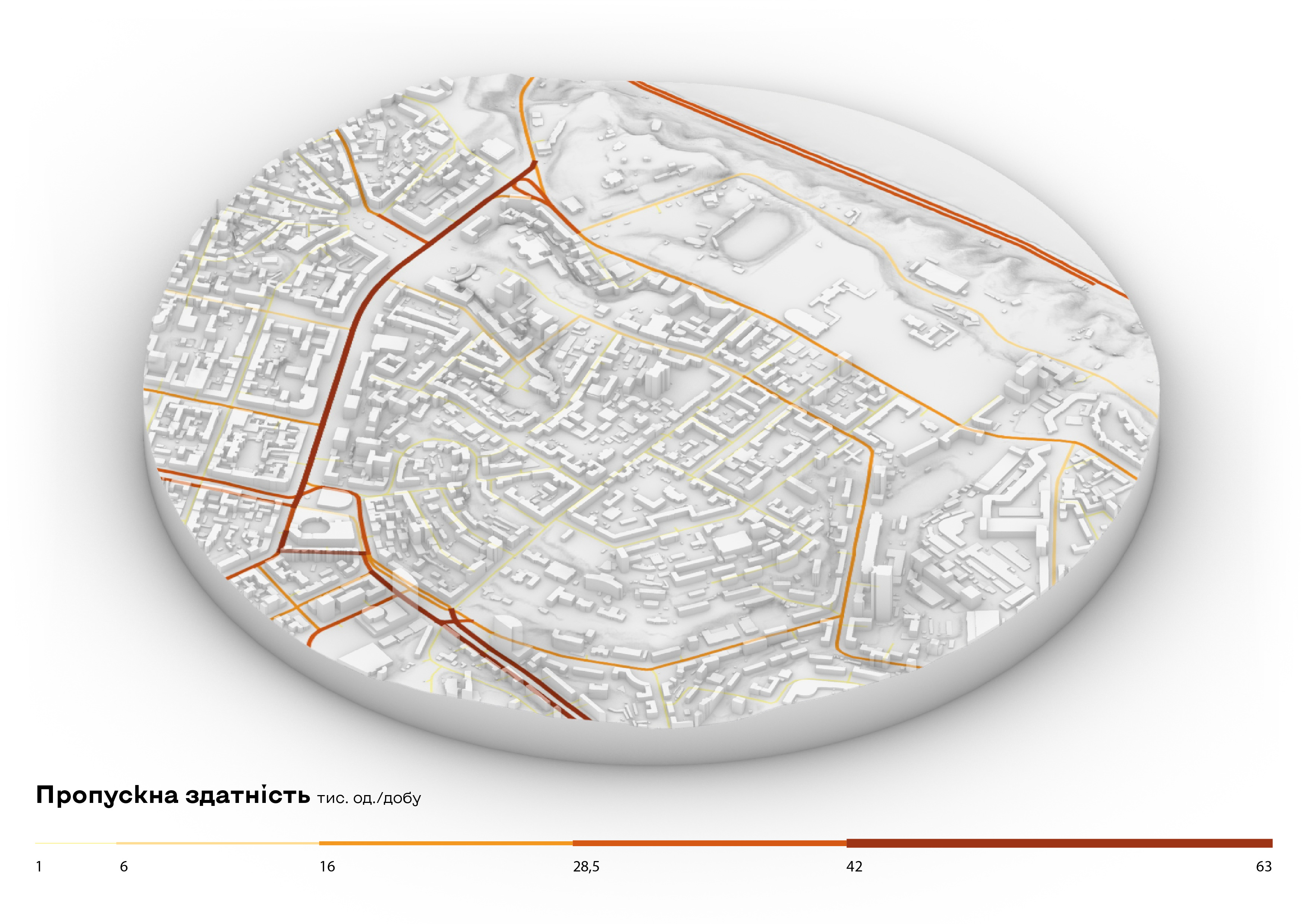 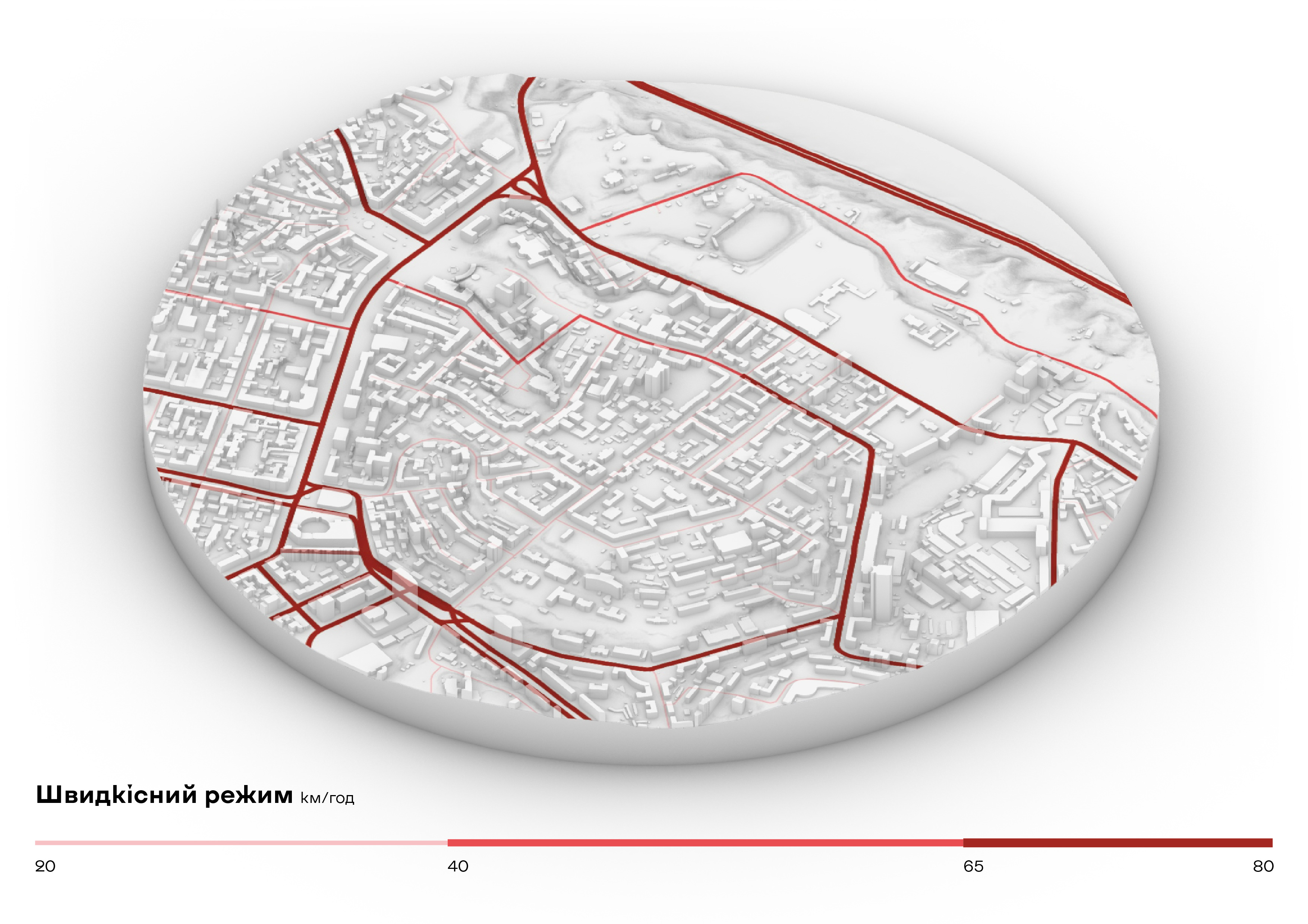 All public transit routes go around Lypky as opposed to going through it. Due to its sharp hills and significant distances, some directions are not accessible to the residents or workers. A convenient solution is the metro, which is used by the majority to get to and from the area. Locals say the metro is sometimes used as a taxi to pass the high hills.

Trolleybus lines graze the area's borders, and locals seldom use those. Bus routes go through the Hrushevskoho, Khreschatyk, Mechnykova, Klovskyi uzviz and Kriposnyi provulok streets. Marshrutkas are also a popular transport method, but those do not serve most streets. Bikes are most actively in use on Khreschatyk, Basseyna and part of Shovkovychna.

The Lypky neighbourhood is situated in the centre of Kyiv. This is where all major car traffic corridors are; specifically the Basseyna, Hrushevskogo, Khraschatyk, Parkova doroha streets. Despite this, car traffic density remains low inside the Lypky area. The street network, which was designed to be car-centric, is not used extensively. 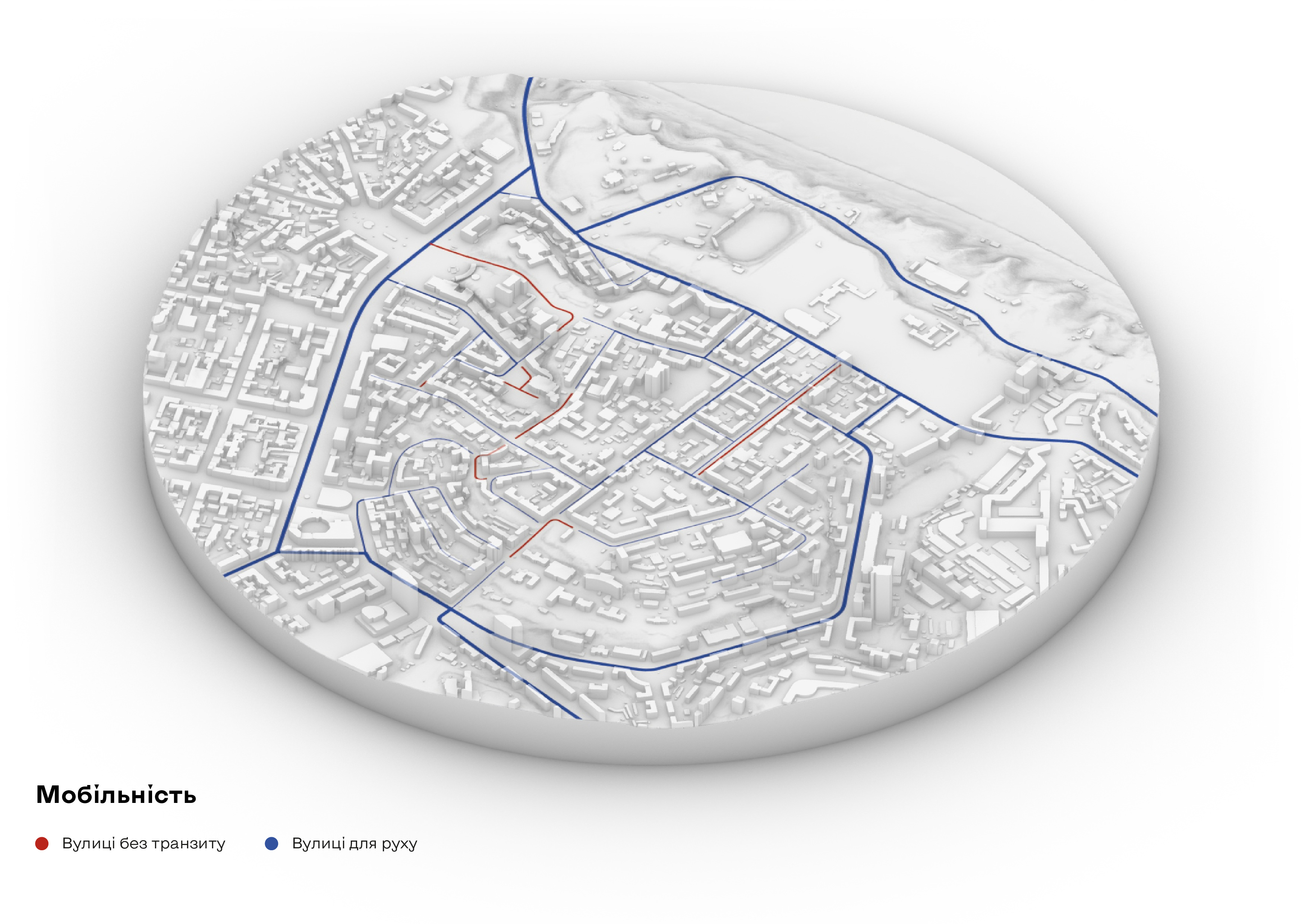 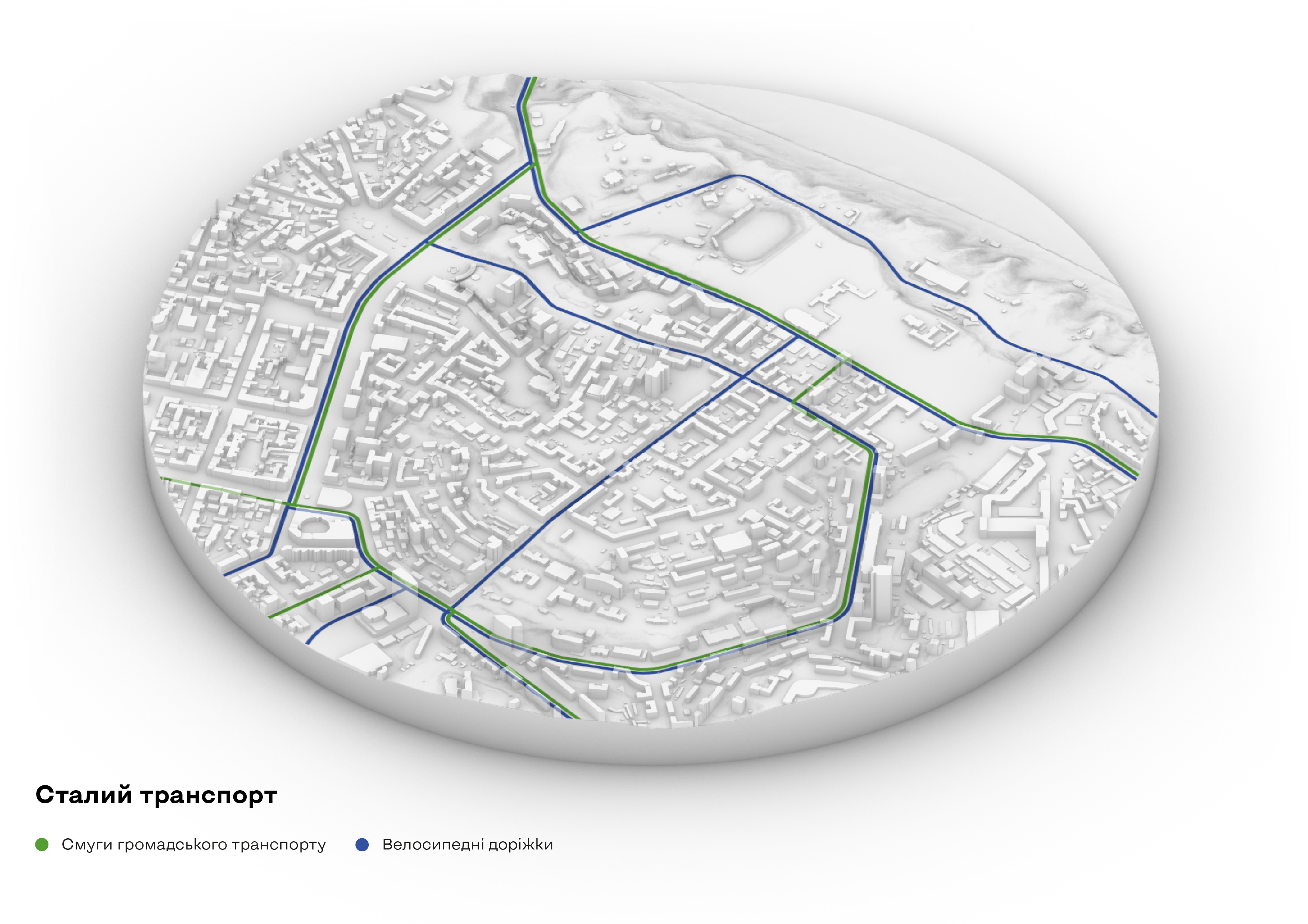 We created a network of cycling routes based on the city council’s endorsed concept of development for Kyiv’s cycling infrastructure which are most frequently used by cycle commuters. To increase the number of public transit commuters and improve user experience for Lypky residents, we added two bus lanes on Hrushevskoho, Khraschatyk, Baseyna, Mechnykova and Klovskyi uzviz streets. We also suggest moving the public transit route from Kriposnyi lane into Lypska street.

We eliminated the car transit routes through Lypky and kept three primary access points for cars on the perimeter. Vehicles from Ivana Franka square can move through Horodetskoho street to the Khreschatyk corridor. From Luteranska and Pylypa Orlyka streets, we channel the car traffic into Shovkovychna street and further into Hrushevskoho street. Through the lower perimeter, cars from Shovkovychna and Kruhlouniversytetska are directed to Bessarabska square.

May 2021
‍
‍Project was created by